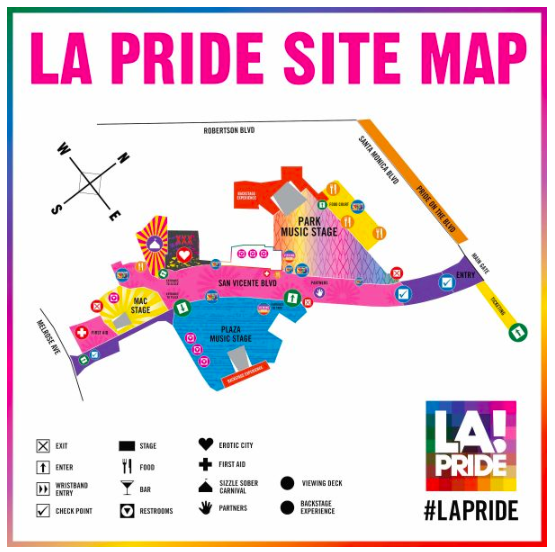 The West Hollywood City Council endorsed the idea of expanding this year’s L.A. Pride Festival onto Santa Monica Boulevard for this year.  However, its members said they wanted to consider other options for future Pride festivals and a possible realignment of the footprint of the upcoming one, scheduled for the weekend of June 7 through June 9

Councilmember John Duran also suggested that the city eventually take more control of the event, diminishing the role of Christopher Street West, its non-profit organizer for the past 49 years.

The Pride on the Boulevard festival would provide free access to visitors, booths for local non-profit organizations and a stage for local LGBT performers, addressing concerns raised in the past. Madonna Cacciatore, the executive director of CSW, also noted that it would not include
food and beverage vendors, which would encourage those attending to visit local businesses in that area of bars and restaurants known as Boystown.

Councilmember Lauren Meister said she was supportive of the new festival footprint but suggested that it be extended east of San Vicente Boulevard in front of the gay bars and shops there. Mayor John D’Amico said he also was concerned about the festival footprint and that it focused too much on the north side of Santa Monica Boulevard and not enough on the north side. Cacciatore said the CSW supported the idea of extending the street festival east of La Cienega.

Duran said he generally supported the new footprint, however, he was concerned about the impact of closing Santa Monica Boulevard from 10 a.m. on Friday, June 7, through 7 a.m. on Monday, June 10, as CSW proposed. Councilmember John Heilman and Mayor D’Amico said they shared that concern. In response, Jeff Consoletti, whose JJLA produces the event, said the boulevard could be reopened as early as 5 a.m.. to accommodate early rush hour traffic

City staffers estimate that moving the festival onto Santa Monica Boulevard would cost the city an additional $418,000. While CSW didn’t present a budget for the event, in years past it has cost the city about $1.2million.

“We are beginning to move more of the festival out into the streets of West Hollywood. I think that is a good thing. It would then more closely resemble the Castro in San Francisco and the Pride event in New York City,” Duran said

“I for one would support in the future looking at alternative options for the production of the Pride weekend and a diminished role for CSW. It sounds like CSW wants to do the entertainment, which is fine…. But if more and more of the nonprofit organizations are moving into the right of way, then the city has to take a larger role in managing what happens on our streets.

The Council asked the city staff to consider a larger footprint for this year’s festival. It also voted to add Heilman to the two-person CSW/Pride subcommittee, which currently includes John D’Amico. John Duran had served on the subcommittee previously

CSW should have expanded the festival onto the boulevard years ago instead of keeping it confined in the limited space where it is currently.Palm Springs years ago integrated its Pride festival along Palm Canyon Drive welcoming all visitors,not just the gay ones.The additional day where traffic is diverted shouldn’t be a problem as there will be roadside signs warning drivers of the closures ahead. Palm Springs Pride also doesn’t have an admission fee, an incentive for many people to visit the festival.Local businesses pay for some the of the costs because they know they will get increased patronage from the… Read more »