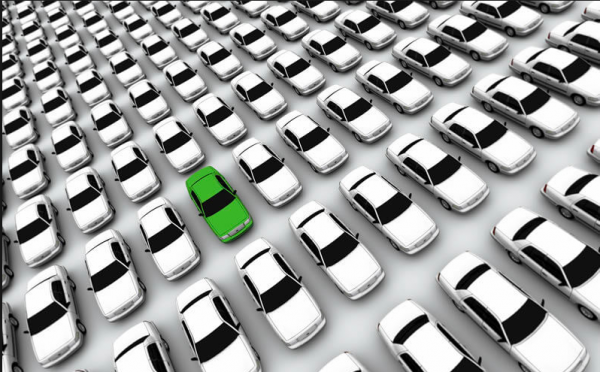 West Hollywood is reducing commercial parking requirements by up to 70% depending on the type of business and up to 100% for some businesses moving into smaller spaces. That is according to a new report by WeHo by the Numbers based on city documents.

West Hollywood, like many cities, requires new businesses and new developments with commercial space to provide a minimum amount of commercial off-street parking. The business or developer can provide more than the minimum if they want. The parking can be on-site, in a nearby lot, or in city-owned parking. The minimum is based on the type of business and its physical size. A bar needs more parking spaces than a retail shop of the same square footage.

West Hollywood is reducing the requirements in two ways. The first is to cut the minimum number of spaces up to 70% for most business types. For example, the city is cutting the minimum from 15 spaces per 1,000 square feet for bars to 5, 10 to 3 for gyms, 9 to 3.5 for restaurants, 4 to 2 for personal training facilities and 3.5 to 2 for general retail (including grocery stores). The requirement for hotels is going from 1 to 0.5 per room.

The report illustrates the reduction for a hypothetical grocery store development similar to Pavilions. The old rules would have required 284 parking spaces for the store and adjacent commercial building. Now, the report estimates the project would need roughly 152 spaces, about half as many. The hypothetical developer would decide whether to build more spaces or save on construction costs.

There is a second cut for some businesses that move into smaller, previously occupied spaces of less than 6,000 square feet. With the changes, those businesses do not have to provide any more parking than the prior business did. That is true even if the new business is more parking-intensive or if the prior business did not provide any parking. It is a reduction of up to 100%. It covers three-quarters of the city’s smaller commercial spaces (those under 10,000 square feet).

The city expects economic development and other benefits. The report puts them in five categories:

–First, jobs and tax revenue from new businesses. The city believes the old parking requirements were “commonly a deal breaker for would-be businesses” thinking of entering the city.

–Third, help for existing businesses. While the changes have been described as “prospective,” existing businesses will be able to apply for a reduction in their parking requirements. It might save money for businesses that pay a private parking operator or the city for spaces. It could also allow a business with substantial unused parking to free it up for other businesses.

–Fifth, increased sustainability and preservation. By encouraging re-use of existing buildings, the changes may reduce demolitions and new construction, which are environmentally less desirable than re-use.

On the flip side, the city staff believes that any potential impact on residential neighborhoods can be handled through existing procedures for residents to request parking restrictions on their streets.

In addition to the expected benefits, the city argues that lower minimums are appropriate on technical grounds. For example, the city explains that the old minimums were too high because they were meant to provide ample parking in suburban areas, not the right amount of parking for an urban area like West Hollywood. The city also points out that commercial parking demand in general seems to have declined in West Hollywood

The report compares West Hollywood’s old and new parking minimums to the standard minimums in selected cities. It concludes that some of the old minimums were higher than nearby cities, but others were not. The new minimums, however, are now the lowest among Beverly Hills, Culver City, Pasadena, and Santa Monica (except Downtown Santa Monica, which has no minimums).

As part of this effort, West Hollywood’s consultant collected parking use data for a number of businesses in the city. For example, Trader Joe’s used four spaces per 1,000 square feet on weekends. The consultant then recommended “data-driven/right-size” ranges for the parking minimums. The city chose the lower end of those ranges.

To find out more, see the full report, How much did West Hollywood cut commercial parking requirements?

It has become increasingly difficult to find parking in the Pavilions parking lot. It’s a nightmare. The recycle center bottleneck doesn’t help.

Have you ever been on the 2nd floor of pavillions parking lot? there is plenty of parking there and the elevator is directly inside the grocery store. Very convenient

The LA Times printed an Op-Ed today (12/17) titles “Life after parking lots” written by a man with a world view as CEO of a global architecture firm. Worth a read for those who might be interested in the future rather than just one day at a time. Cars MUST eventually be removed from city core sections not just for traffic control and pedestrian safety but so that the city can adjust to the coming increase in population and necessary growth of housing and retail space.

Real Elephant in the Room
Reply to  carleton croninc

Thank you for the reference Carl. While sympathetic with fewer cars in the urban core it also would be nice to see someone of global stature address the “real elephant in the room” which would be population which is overrunning the planet. Exponential expansion without regard for the quality of life is not the answer. With trees sprouting from buildings rather than the ground may be a trendy idea but it is not natural. That should be a very basic clue as trees were not conceived to be decorative….they produce a key link in the cycle of life itself.

More terrible governance by a clueless city council. Sadly no surprise here. The council has no independent thinking and a false vision of an urban environment which is not sustainable in today’s Los Angeles. Goodbye to our quality of life.

I haven’t regretted giving up my car and using Uber, Lyft, the bus, or simply walking. I’m saving a LOT of money and don’t have to worry about parking.

This is an example of the Chamber of Commerce over reaching there greedy hands into the operation of the City.

Seems like whatever retail is left in Boystown will be gone in the next wave of lease endings. Parking restrictions help keep certain neighborhoods balanced. Opening these up invites the ‘chain’ stores and our unique village will be a memory in years to come. It’s a one size fits all solution for the whole city – and it’s inconsistent with past staff recommendations on parking or other initiiatives that had different rates and requirements for different zones.