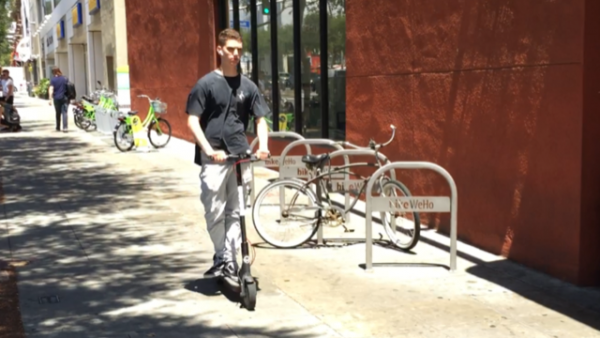 Even though the scooters have been banned in West Hollywood, it doesn’t mean a thing if there is no enforcement. The scooters are still weaving through pedestrians on the sidewalks.

The city has painted circles on the sidewalks warning that scooters, bikes and skateboards are not allowed on sidewalks. While this is not the most irresponsible thing the city has done in response to a public safety issue, it is up there on the list.

People who ride scooters, bikes and skateboards do not look down, they look straight ahead. 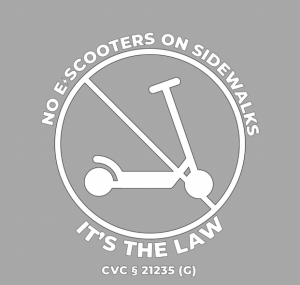 The warning signs should be on poles at eye level in a bright color and warn of a fine for scooters, skateboards and bikes. I think a $250 fine is reasonable.

If a person is struck head-on by a scooter, bike or skateboarder and falls backward, hitting the back of his or her head on the pavement, that person has a very good chance of being killed instantly or slowly bleeding to death or dying in the hospital from intra-cranial pressure.

An emergency department nurse at UCLA Medical Center in Westwood told me recently that two out of three injuries that go to the trauma center lately involve scooters.

I suppose it will take a death of one of our beloved citizens before the city effectively enforces sidewalk safety. No one should be injured or die because the city doesn’t enforce its’ own laws.

I suggest that signs, as I described, be placed on every sidewalk where this typically occurs. I also believe that the city should hire sidewalk enforcement personnel to patrol (on foot) the major sidewalks and write tickets, much like parking meter enforcement. Plus, I believe more cameras should be installed so that when something does occur it will be recorded. That goes for every crosswalk too.

In addition to those measures, the city should be picking up scooters, impounding them and charging the scooter companies a fine to get them back.

There is no reason that the citizens of West Hollywood should not have safe sidewalks. The city council and the public safety commission have the ability to save lives and prevent injuries if they choose to. This is their chance to be proactive before someone gets hurt.

EDITOR’S NOTE:  This is one of a series of op-eds that candidates in the March 5, 2019, West Hollywood City Council race are invited to submit until election day.

A few times a week I do a round trip, 4 mile transverse of WeHo on foot. I start East of Fairfax and go to a gym on Sunset – mostly walking East-West on Santa Monica. *disclaimer – I’ve never rode an e-scooter and have little intention of doing so* I see a handful of e-scooters, and bikes, on the sidewalk each time. I have nearly been hit stepping out from a storefront into the path of a scooter and would have been injured and very annoyed had this occurred. However, I run a gauntlet of illegal car/truck/pickup/SUV driver behavior… Read more »

Whenever I have asked Council members if they read Wehoville.com, invariably the answer is ” sometimes”. The next time I ask the answer should be “every day!’ – for this is where “public comment” resonates more loudly than at Council meetings..

Only one of our City Council members subscribes to our daily news updates. And none of the challenger candidates for City Council does. Says a lot doesn’t it 😉

It would help if the coverage included a higher level of seriousity and if fresh articles could be read when most folks read the NYT, Washington Post,CJR, WSJ and Huff Post, if one must, early in the morning. It’s unclear what the publishing time schedule might be. The articles from James Mills following meetings appear prompt so one can respond while the subject matter is still in mind. Less eyeball and salacious nonsense and more timely substance.

These e-scooter riders are demanding that pedestrians give them the right of way. Or the just laugh at me when they manuever around me because of impatience I have encountered almost collided with these unapologetic riders if electric scooters and skate boards who roam and then dominate the sidewalk not to even say excuse me or give you eye contact or glance of apology but intimidate you into moving out of their way! The optimal word is SIDEWALK! You walk or use legs not a 20-30 mile an hour electric scooter and yes this bow includes motorized bikes. These are… Read more »

If you are going to make an argument, you might want to know that these rented scooters have a speed cap of 15 MPH. Further, it is legal for people to ride a bicycle on almost every sidewalk in West Hollywood. Only illegal in places where there is a bike lane, a city ordinance, and an accompanying sign. I don’t advocate people riding scooters on the sidewalk, but if given the choice, I’d much rather be hit by one of those than a bicycle. So our laws need to be looked at.

Motorized is the key word. The city passed an ordinance regardless if they are rented or 15 miles and hour. Signs Spray painted on the sidewalks say these are illegal and not permitted on sidewalks. The law states so and the ordinance dictates that people riding the scooters are blatantly disregarding the law by ignoring these signs! Either not up on our laws in the city or completely oblivious and ignorant or disregard the laws in general. People need to stop do that in my opinion. So your point is that laws should be looked at. The city council passed… Read more »

You want people riding skateboards on the street? Insanity! I grew up riding bikes without bike lanes in traffic (and there WAS traffic), riding skateboards on the sidewalks without people getting all paranoid about getting hit by one and people had scooters (not electric) they rode on the sidewalks. It is the generation that grew up with parents that protected them from EVERYTHING yelling and screaming these days about these things. Learn to get your faces out of your phones and be aware of your surroundings at all times. Take your earbuds out of your ears and listen to your… Read more »

If a person is struck head-on by a car, pickup or truck and falls backward, hitting the back of his or her head on the pavement, that person has a very good chance of being killed instantly or slowly bleeding to death or dying in the hospital from intra-cranial pressure.

*fixed that for you

Reading this it has become clear to me that wheels on the sidewalk are not the real issue here. Let’s be honest, we’re all adults here. EVERYONE knows not to ride/scoot on the sidewalks, you don’t need signs in our faces. Signs will not make any difference. Why is everyone opting to ride on the sidewalk risking a fine? Because it’s not safe to ride bikes or scooters in the street. Instead of putting face-high signs threatening a big fine we should creating a riding environment that they feel safe to ride on. I certainly do not claim to know… Read more »

Here’s a simple solution that would fix this problem throughout the city while maximizing the safety of all involved: Let’s set speed limits for bicycles, e-scooters, and even pedestrians. Here’s a great example: 1: The street speed limit whenever operated in bike lanes or on streets. 2: ~10mph on sidewalks when no Pedestrians are in the area (ie: the often empty sidewalk north of the bus station & Sherif’s department). 3: 5mph on sidewalks with limited traffic 4: ‘walking speed’ on more crowded sidewalks. We can then work with these companies to phase in technologies to detect scenarios, provide excessive… Read more »

No, Absolutely not. Off the sidewalks completely, and out in traffic where they belong… Licensed, and insured like the rest of us.

Really lovely when I get to Kings Rd. Eastbound on my bike, when the bike lane ends, and I suddenly feel like a fool as I find myself suddenly competing with tons of moving steel lol.

More bike Lanes? The ones we have aren’t even used. Maybe we should walk in the bike lanes to avoid getting run over by bikes and scooters on the sidewalks!

It’s absurd that the surrounding cities allow scooters but supposedly progressive weho doesn’t. I agree that people shouldn’t ride them on the sidewalks, but on the streets, they are less dangerous than bikes an far easier to rent.

Weho has no prohibition on scooter riding in the street. …..and that is not what this opinion piece is about.

I think scooters should be allowed to ride in the street in the bike lane, requiring a helmet. following the same laws as a motor vehicle and a loud beeper to warn bike riders they are approaching them. A total ban without further discussing and other options was not a good idea. I am not against scooters, I am for pedestrian safety. Pedestrians are the most vulnerable mobile people in public

So where is your outrage and ire in relation to cars?

I’m thinking you missed several of my many posts in the past about making West Hollywood a car free zone like the Third Street Promenade in Santa Monica and, the firestorm of responses! 🛵

I’m down for that. Increasing, and creating new carrying capacity for transient cars has been counterproductive, and detrimental for the health and well-being of weho residents. Lets try another approach – put the whole city on a road diet.

We could take a lane each way on SM and Sunset and dedicate to buses, bikes, and scooters. Cars would only get one lane, but it will fix this scooter issue. And make it less appealing for all the drive through traffic.

I see scooters all the time riding over the the painted circles on the sidewalk at 20 mph. Although these brazen and self-centered imbeciles that ride on the sidewalk may not cause pedestrian injuries that are fatalities, they do diminished the pedestrian’s confidence in their environment, and that is enough reason to begin serious enforcement of our laws. The city must find the will to impound illegally dumped scooters, enforce no riding on sidewalks and require the scooter companies to disable the ability to rent a scooter within West Hollywood. Block by Block, Sheriff volunteers and Public Works should be… Read more »

These devices are incapable of traveling at 20mph. They’re limited to at most 15.5mph, or less If the sharing company chooses. Also, reaching those top speeds is not likely given the setup of our roads. I still think 15.5mph is too fast for sidewalk use in the presence of pedestrians, but keep in mind that bicycles can easily hit 20 or 30 MPH and are legally permitted on the sidewalks.

Also, the use of the scooters themselves in WeHo is not illegal. They just cannot be left in the public right of way.

*Lime speeds are up to 20 mph
*Bicycles are not motorized.
*Scooters are motorized vehicles
*Bicycles only allowed on sidewalks when there is no bike lane.
(*That special dispensation is a mistake)
*Bicycles must always yield to pedestrians.

there should be a bike lane on every street, where there isn’t like side streets bike should always yield to peds