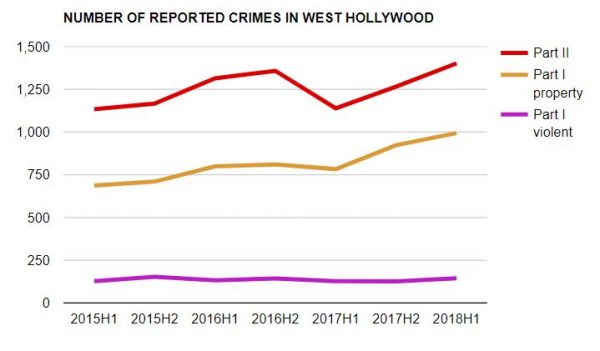 The number of Part II (less serious or common) crimes grew roughly 25% in West Hollywood in the last three years. That is according to a new report by WeHo by the Numbers based on city data. Part I crimes are the most serious and commonly reported, such as homicide, rape, robbery, and grand theft. Part II crimes are less serious or less commonly reported. Examples include non-aggravated assault, vandalism, drug crimes, and sex offenses (excluding rape).

There were about 1,400 reported Part II crimes in West Hollywood in the first half of 2018. That works out to eight a day. For comparison, there were over 1,100 Part I crimes in the same period. About 1,000 of those Part I crimes were property crimes, the rest were violent crimes.

In West Hollywood, the single biggest type of Part II crime involves vehicle laws. Those crimes are a quarter of the Part II total, or two per day. The next biggest categories are non-aggravated assault (12%), narcotics (11%) and vandalism (9%). Four types of crime are each around 5% of the total: fraud, drunkenness, non-aggravated domestic assault and drunk driving.

Part I aggravated assaults declined about 25% in the last three years. However, an increase in reported Part II assaults more than offset that decline. The total number of reported assaults grew almost 50% over three years. The report does not speculate about how much was due to more reporting versus more crimes committed. The biggest increases were in the first half of 2016 and the first half of 2018.

Over half of the increase was concentrated in 2015. The number doubled between the first and second halves of 2015. The rest of the growth has happened since then. Most of the increase was in rape and misdemeanor sex offenses. There was a change in the definition of rape for reporting purposes, but the 2015 numbers already reflect that change.

To find out more, see the full report, What are the trends in Part II crimes in West Hollywood?