As a community we have a long and complicated relationship with the Sheriff’s Department. While our current relationship is overwhelmingly positive, sometimes it is not clear if the City of West Hollywood is the Sheriff’s employer or cheerleader. But West Hollywood has always played a role in holding the department to higher standards of respect for our community’s diversity and community based policing.

The current race pits incumbent Jim McDonnell, who was brought in by the Board of Supervisors to clean up a department racked by scandal and corruption under the former regime of Lee Baca, against a retired former Sheriff’s lieutenant, Alex Villanueva, who has cast himself as the “reformer” in the race. 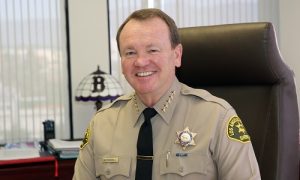 While McDonnell has made significant progress in reforming the county’s jails, he has incurred the wrath of the rank and file by offering to turn over confidential discipline records of approximately 300 “problem deputies” to the District Attorney’s office. Not surprisingly this has sparked outrage from ALADS, the union representing Sheriff’s deputies. Given the number of outlandish multi-million dollar settlements the county has paid due to deputy misconduct, including the payout for the shooting of the two young men who lived on Palm Avenue in West Hollywood, it is understandable why the county would want to figure out ways cut these losses. Every dollar paid for legal settlements is a dollar that can’t be used to hire more deputies.

Although McDonnell was selected by our progressive Board of Supervisors from a competitive list of candidates to succeed Baca, who was arrested after a federal investigation, McDonnell suffers from two apparent sins: he was formerly from the LADP rather than the Sheriff’s Department and he is a former Republican.

Bi-lingual Villanueva has done a good job motivating Latino support. He has also attacked McDonnell, claiming he is too cozy with ICE and has cooperated with the Feds in turning over undocumented immigrants who are incarcerated in county jails. The reality is that this process is governed by California’s “Sanctuary State” legislation. While Villanueva has made a number of over the top statements about this issue, he is on the record stating that he would essentially maintain the same policy as McDonnell except that he would turn over the prisoners to ICE in a court yard outside the actual jail building rather than inside the jail facility as McDonnell has done. Frankly this is a not a significant distinction.

But Villanueva’s pandering was sufficient to garner the endorsement of the Democratic Party of the County of Los Angeles. Coupled with the ALADS endorsement, he was the candidate of both labor and immigrant rights advocates.

While I generally vote the Democratic Party line, I am not unmindful that the Democratic Party has not always been true to its supposed progressive values. I would remind you that Prop. 10, the rent control measure would not be on the ballot had not Democrats overwhelming adopted Costa-Hawkins Act in the mid-90s, which restricted municipalities from enacting or expanding protections for tenants. The party also opposed Gov. Arnold Schwarzenegger’s successful effort to end gerrymandering by empowering a citizens’ commission to draw legislative districts. That measure got rid of the process where the two partiess conspired to draw “safe seats” for each other and is now a national model for those fighting to end gerrymandering.

I have a long history of working for reforming the Sheriff’s Department. In 1991, as president of Stonewall Democratic Club, I waited hours to before being able to testify in favor of creating the Kolts’ Commission, which ultimately recommended a blue print for reform of the department. I also successfully represented Bruce Boland, the gay deputy that was wrongfully terminated from the department, in his lawsuit against ALADS for the union’s failure to provide him with legal counsel. As a City Council member I called out the Sheriff for using aggressive vice “decoys” to entrap gay men for “lewd conduct” rather than using uniformed officers to discourage this sort of behavior.

Over the years it has been obvious that ALADS, the union representing the rank and file deputies, has been a consistent opponent to reform. That is why I cannot even consider voting for Villanueva, who would be their lackey. A Villanueva administration would give us the same sort of window dressing we saw under the Baca/Tanaka regime, with little meaningful change. Electing a relatively low ranking former deputy backed by a union that opposes deputy accountability, is not a receipt for reform.

You would not replace our City Manager with the person who headed Code Enforcement; a retired lieutenant who has not even commanded a station simply lacks the breath of experience needed to run this massive department. This is not just my opinion; it is the opinion of our Supervisor Sheila Kuehl and the Los Angeles Times.

West Hollywood has an important interest in the outcome of this race. The shooting on Palm Avenue was incredibly troubling even if it was pretty much ignored by City Hall. Recently a trusted WeHo deputy was terminated after it was discovered he was receiving “services” from a massage parlor in return for tipping them off about impending vice raids.

While we enjoy a high level of services in West Hollywood we need to act affirmatively to insure the Sheriff’s Department lives up to the highest level of professionalism. Your vote matters.

I need appointment with the la head quarter of police asap.

We came to exactly the same conclusions as you have, and for exactly the same reasons. McDonnell is not an ideal candidate, but he has worked with the progressive Supes toward real reform. Villanueva would be a captive of the deputies’ union, and as such, would represent a brake upon needed reforms.

We need law enforcement, but we also need transparency and accountability to the public. McDonnell is our present best bet at getting both.