West Hollywood, a city that has struggled to find ways to deal with so-called disrupters such as Airbnb, Uber and Bird, now has Pavemint.

Pavemint, a mobile phone app, allows drivers to find privately owned parking spaces. With WeHo’s annual Halloween Carnaval around the corner, Pavemint has been pitching its service on social media to those who will be looking for places to park during the jam packed event. 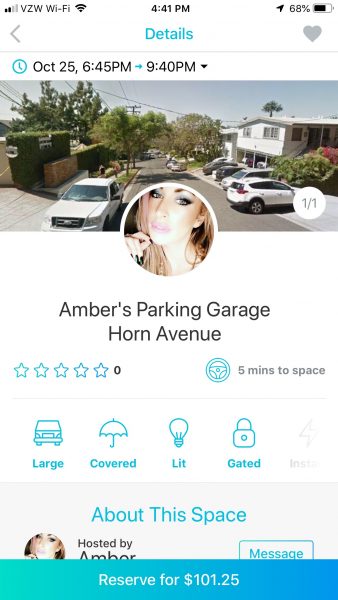 Pavemint also is being pitched with some success to owners or tenants who have access to parking spaces and want to rent them out through the app. On Wednesday afternoon in West Hollywood, for example, a woman identified on Pavemint as Aly was renting out a parking space tucked under an apartment building on North Alfred Street for $4.31 an hour on weekdays between 9 a.m. and 7 p.m.

The rates vary with the day and time of day. Kylie’s space in her home garage on Westmount Drive was going for $2.24 an hour early Wednesday evening. And John had a space available in his apartment parking garage on Hacienda Place for $2.81 an hour during the same time period. The ground level space beneath TMarie’s apartment on Shoreham Drive was a bit more pricey, with a rate of $9 an hour.

Amber is looking to charge $101.25 for a space in the apartment parking garage on Horn Avenue for a three hour stay tomorrow evening.

Hollywood-headquartered Pavemint has received $5.7 million in funding from its founder and chief executive Randall Jamail, according to L.A Business Journal. It reported that he made his fortune as the head of Houston-based Justice Records, a record label that produced albums for country music stars such as Johnny Cash and Willie Nelson.

Lauren Hoover, director of communications at Pavemint, said that “unlike Airbnb, etc., Pavemint tries to work with, rather than against, each city we go into. In the past, we’ve talked with the City of West Hollywood in order to find out the city’s specific parking pain points and try and address these.

“Every tenant is required to get permission from their landlord before listing on Pavemint and every listing is required to go through address verification–a process which ensures that the person renting out parking is a verified owner or occupant of the listing.
“I know that there are certain people who are nervous about the platform, as it’s such a new one in the realm of the sharing economy. However, we are here to genuinely try and help neighborhoods, not harm them (and reduce the traffic and CO2 caused by parking). Most people with driveways have extra space that they never use, or don’t use during work hours. Some can walk to work and don’t even have cars. We’re here to unlock that underutilized space to help both drivers and residents. “

Correction:  An earlier version of this story stated the prices for parking at the former Tower Records lot and at the lot on Larrabee as per hour.  In fact, those rates are per day.  The story has been corrected to reflect that.

So does this mean that if I own a condo in a building with underground parking, tons of strangers from all over the city are now going to be in my parking garage? I do not want this.

Technically, it’s illegal to rent out property you don’t own. Just sayin’…

Yes, a serious problem we really need to work on!

This doesn’t have to be a terrible idea if it adds to the parking supply. There are many small parking lots around that don’t have enough spaces to pay for a parking attendant and thus don’t allow parking outside business hours. This is a way for those lots’ owners to open them for paid parking. The major problem is the two big classes of people who get special street parking privileges – local residents with street parking permits and disabled people with placards who get unlimited parking at meters. They’ll have an incentive to move their cars to the streets… Read more »

It is in violation of most leases and considered “subletting”, a three-day-notice offense and eventually an eviction. It’s not worth it for the very little money people will make. Strangers will be interfering with the peaceful living of the other tenants apartment homes and quite possibly bringing more crime to the City. Get a second job if money is that tight. Landlords could face legal action from the other tenants.

BINGO, Rob Bernstein & Alan Strasberg. On the very occasions/holidays that the city TRIES to make parking a little easier to accommodate non-resident visitors, yet ANOTHER predator-capitalist gaming the system by tempting residents to rent out their own spaces while occupying PUBLICLY-OWNED/TAXPAYER-MAINTAINED RIGHTS-of-way to line his OWN POCKETS!

Why not? Seriously. Who is this harming? Private lot owners: that’s who. Those spending money on city permits to commandeer public parking meters, which the city makes a ton of money off. And takes away from public parking spaces, so valet businesses can make $$, and so can the city.

And I’m sure people will be bitching and complaining about the “miscreants loudly invading apartment building parking spaces.” Which, there will be some of. But probably not as many as people will complain about.

Oh, great. If you think street parking is hard to find now, wait until residents start renting out their assigned parking spaces and then parking their own cars on the street.

Bingo. That’s one issue. And another is that side streets, since nighttime non-permit is prohibited, will become noisier as those using this service with people out for the night hardly quieting down as they seek out their cars. And many driveways in WeHo on smaller properties are hard to identify from their neighbors, and people will often park in the wrong ones. This is full of many major negatives.

Oh no! As with AirBNB siphoning off the city’s addiction to TOT, this will suck at the teet of the obscene city-run business known as parking vulnerability exploitation. This can’t stand! The student council will legislatively shut down this competitive threat.