UPDATE:  A spokeswoman for the L.A. County Animal Care and Control Department said that it had been notified on Monday by the City of West Hollywood of reports of possible poisoning of dogs on Hayworth Avenue.  Animal Care has assigned two investigators to look into the incidents.  The spokeswoman said that Animal Care advises dog owners to give priority to getting their pets to a veterinarian and then asks that they call Animal Care to report the issue at(818) 991-0071.

Dog owners on the 1200 block of North Hayworth Avenue in West Hollywood and those who walk their dogs there are reporting an outbreak of illness among their pets that some worry might be the result of poisoning.

Bob Voakes, the manager of an apartment building on the block who also is a dog walker, said one dog was diagnosed by a veterinarian as having been poisoned. That dog almost died but has recovered, Voakes said, and must remain on antibiotics for a long time. Voakes said he’s personally aware of several other dogs who have become seriously ill and taken to veterinary clinics.

One resident posted a notice on the street warning of the illnesses. “Beware!!! In the past two weeks, at least 7 dogs that we know of have been poisoned on the 1200 block of N. Hayworth Ave.,” the notice reads. “Symptoms have ranged from vomiting and fever, to a stroke and seizures. No one is sure where or how the poisoning is taking place. Chemicals on lawns? Deliberate poisoning? There has been a strange man throwing bread into various lawns on the block. We don’t know if that is connected to the poisonings, or not.” 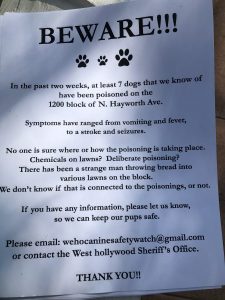 In a series of email exchanges, other residents described problems experienced by their pets.

“He threw up, was cold/shivering and didn’t have energy to walk,” one person wrote. “Then he had a fever. Thankfully he came out of it, but it could have been due to the ‘poison’ on the sidewalk.”

“New puppy next door wound up in emergency, was throwing up and wouldn’t eat for days before,” said another person. “Maxie was throwing up yesterday but is ok today. … I don’t have all the facts yet, But being careful is best course of action right now.”

“Oh my goodness!!! This is horrifying. Duke was really sick 2-3 weeks ago and he never gets sick,” said yet another. “He threw up, was cold/shivering and didn’t have energy to walk. Then he had a fever. Thankfully he came out of it, but it could have been due to the “poison” on the sidewalk.”

A resident wrote that another person’s dog “was just diagnosed with pancreatitis, and is in hospital. She has had other misc (sic) health issues, but he’s said, according to an ASPCA site, one possible cause of pancreatitis are organophosphates, which apparently are in a lot of insecticides.”

Joshuah Michael, who has lived on that block of Hayworth for six years, said his two dogs have experienced red bumps on their skin. The dogs, one a year-old dachshund and chihuahua mix and the other a six-year-old miniature pinscher, also began throwing up after Michael returned from a vacation two weeks ago.

“Everyone thinks it’s someone who has poisoned a dog on the street,” Michael said. While not rejecting that as a possible reason for the spate of illnesses, Michael said, “I think that’s off the wall.”

“I definitely think that the news was trying to hype it up,” he said, citing a local television reporter who seemed uninteresting in hearing other possible reasons for the illnesses. Those reasons, Michael said, could be infections from fleas or mosquitos. Such infections by mosquitos and fleas have been cited in recent news stories.

He noted that some neighbors suggested that dogs might have become ill after eating bread crumbs found on the sidewalk  and lawns. Michael said those bread crumbs began appearing after a spat in which one neighbor, upset that another had left a bag of trash on the lawn or sidewalk, had nailed it to a tree with a note calling out the neighbor for not putting the trash in a can.

“There is a very spiteful anger that we’re begun to experience in the time we’ve been here,” Michael said of life on his block. “The camaraderie is really strong,” he said. “Not among humans but among dogs.”

Ultimately, Voakes said, it will be up to the Sheriff’s Station and the Los Angeles County Animal Care Control Department to determine the reason for the outbreak of illnesses. It is, however, unclear if anyone has reported the incidents to either.

I thought this was a discussion of keeping our dogs safe, not dog haters voicing their grievances. You guys would be happier if you got a dog. It would bring more joy and love in your life.

Very legitimate point! It goes to show that there is no lack of motive out there for Xylitol poisoning to be the MOST LIKELY cause of what we are seeing! I would honestly like to be wrong and possibly could be but, the symptoms exhibited by the dogs match xylitol poisoning (see my first posting) and it’s readily available rather inexpensively at just about any drug store. 😢 Why am I raising the alarm on this issue? I tested my theory out at a store that sells 1 lb bags of xylitol for around $8 which I was shown by… Read more »

We dog owners are against all this anti dog sentiment And we are gonna find this guy Or whatever this problem is
We are trying to Live with our dogs in West Hollywood without being harassed with tickets and stupid anti dog things being spoken on this thread …Bunch of losers dorks
We don’t harass people with service dogs we believe The dog owners If they say it’s a service dog leave them the heck alone.

Nope! Phony service dog owners are not going to get a break from me. Anyone whose anxiety is so great they can’t make a 20 minute trip to the grocery store without their pup needs far more than the company of any dog can provide. People who assume the rest of us enjoy their golden lab at the table next to us at our favorite restaurant need to hear from me. At IHOP a couple weeks ago there was a barking dog sitting at the booth with four adults, and my waitress petted it. The dog was allowed to wander… Read more »

Under the Americans with Disabilities Act (ADA), businesses and organizations that serve the public must allow people with disabilities to bring their service animals into all areas of the facility where customers are normally allowed to go. This federal law applies to all businesses open to the public, including restaurants, hotels, taxis and shuttles, grocery and department stores, hospitals and medical offices, theaters, health clubs, parks, and zoos. Landlords can’t even charge people with a Service Animal the pet fee or deposit. See the U.S. Department of Justice Civil Rights Division Disability Rights Section on Service Animals. The Legal protections… Read more »

The building manager of the white building on the east side of the street (in the 1200 block) has attacked dog owners – physically and verbally – more than once. He hates dogs. Cops have been called on him before. Maybe police should start there…. if anyone ever even tells them about this.

Get pictures, videoes and call the ASPCA. He need to be behind bars.

While mosquitoes and fleas are responsible for some illnesses, I doubt they’re behind the localized sickness seen on this block. If they were we would have a pandemic issue across the city than just the one block in WeHo. As for dog waste, we need more poop/bag stations on the streets and less complaining about them. What’s better: Poop in the box or poop on the verge? More frequent cleaning and pick up by the city during summer months would reduce flies and smell. But if waste boxes or bags aren’t conveniently provided, people being people won’t bother picking up… Read more »

Reportedly, at least one vet has named poison as the culprit of one of the most ill dogs, so it’s a matter of trying to find out what kind of toxin it is and how the dogs are being exposed to it. I would rather think this is someone being ignorant about putting out rodent poison or spraying insecticide or weed killer indiscriminately than to think this is intentional. I did see the footprint on the neighbor who was kicked by the above-mentioned animal hater in that block when it happened. Yes, he is known to scream and curse at… Read more »

From some of the symptoms described it sounds like Xylitol which is poisonous to Dogs, but rather safe to humans and even used as a sweetener. Xylitol is safe for people or even primates in general, like most sugar alcohols, it may have a mild laxative effect when eaten in large amounts or when first introduced to a diet. This occurs because xylitol may not be completely digested in the intestines until the digestive system adapts but, with non-primates the digestive system NEVER adapts to it. Xylitol is extremely toxic to dogs! Even small amounts of xylitol will cause hypoglycemia… Read more »

Thank you Cy for the information. I did not know that.

But I do believe that the dogs are being poisoned by lawn chemicals, deliberate bread crumbs or from the feces of other dogs. It is estimated that only 38% of people who own dogs take them to the vet for regular checkups and bloodwork. West Hollywood has 100 million dollars in reserves. They could afford to hire a couple “dog cops” to make sure the dogs have a City issued License and issue $500 tickets for not cleaning up after their dogs.

yes! since weho has so many dogs, actual tickets being written for infractions against the law (like having a dog off a leash in a place that isn’t set aside as a leash-free zone) would be great. tickets written for infractions against common decency would also be great: like 1) taking a non-service dog into a store or restaurant thereby imposing them on everyone’s shopping or dining experience. 2) blocking the sidewalk with a dog so pedestrians can’t use the sidewalk. 3) letting them bark non-stop in your absence (or presence, in the case of the worst owners).

Now now Mr. Schmidt! Any West Hollywooder worth their salt knows that there are no dog owners, only pet “guardians” 😉

Agreed, but they still need to be taken to the vet on a regular basis. I love my dogs more than most people love their children.

I have a lot of friends in Indiana. They really love their dogs there

Our 9 year old chihuahua has never been sick in her life until we moved to the tri-west area of Weho. We live on Westborne just below 24 hours fitness. We walked both of our dogs around the block a couple times a day. Peanut, the chihuahua was so sick we took her to the vet . She had blood in her stool, a fever (105.3),vomiting and was lethargic. Joey, our 9 month old shorkie was not sick. Peanut is better now, but we will never walk them in the neighborhood again. we will drive them to Griffith Park. I… Read more »

I just lost my Pomeranian of 12 years exactly a month ago, I live on Westbourne. She became very lethargic and ill right after I left for vacation. Sadly she was older and didn’t make it.. I do recall seeing bread crumbs on the street at one point. This has me so angry and worried.

I’m so sorry. You will meet up with her some day. I believe that,

Animal Control was been made aware of the situation earlier in the day.