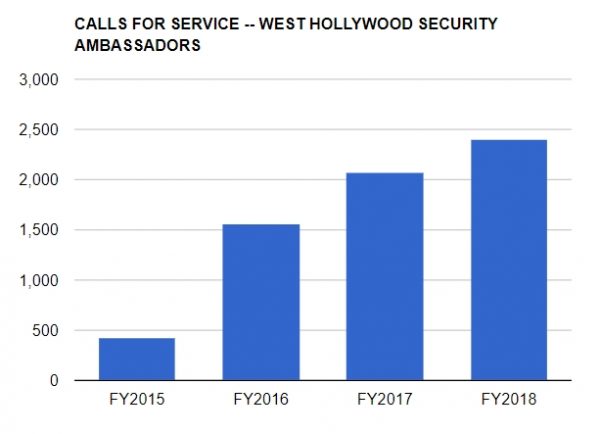 West Hollywood’s security ambassadors received five times more calls for service in fiscal year 2018 than they did three years earlier. The city says they have had a “positive impact on safety and neighborhood livability.” A new report by WeHo by the Numbers asked a follow-up question: Do the security ambassadors actually reduce the number of serious crimes in West Hollywood?

In fiscal year 2018, the security ambassadors rode 37,000 miles on bike patrols. (FY2018 ran from July 2017 to June 2018.) The most common reported activity was assisting pedestrians. It is a broad category. It can mean providing directions, recommendations or other information. It can even mean helping someone with a door. The security ambassadors assisted about 47,000 pedestrians in FY2018. It was roughly 130 a day.

The second biggest activity category was contacts with businesses. The security ambassadors did that about 30,000 times in FY2018, which works out to over 80 contacts a day. They also provided one safety escort a week and helped one motorist per week.

In FY2018, the safety ambassadors also logged almost 2,700 contacts with homeless individuals. It was roughly seven per day. It was also the highest number of homeless contacts in the last four years.

The number of calls for service grew from roughly 430 in FY2015 to 2,400 in FY2018. Calls covered a range of issues, such as trespassing or suspicious activity. The volume of security ambassador calls was lower but of the same order of magnitude as fire department calls: 2,400 versus 7,100 in FY2018.

The report looked for a statistical relationship between the security ambassadors’ level of effort and crime. The expectation was that periods with a higher level of effort might have had fewer crimes. The report tried different measures of effort and crime. No statistically significant relationship was found. It was not a surprising result, given the small sample size and large number of factors that influence crime.

The report did not stop there. It summarized three studies in other geographies that used much larger samples sizes and advanced statistical techniques to try to answer similar questions. All three studies found a beneficial relationship between security patrols and crime.

In one study, researchers measured changes in violent crime linked to the creation of 30 business improvement districts (BIDs) over a decade in Los Angeles. One of the ways BIDs can reduce crime is by hiring private security patrols like West Hollywood’s security ambassadors. In fact, West Hollywood’s Sunset BID paid for security ambassadors until the city took over that role.

The researchers compared crime before and after a BID was established in each area, adjusting for citywide changes in crime. The study found that implementation of a BID was associated, on average, with a statistically significant 12% reduction in robberies and an 8% reduction in violent crime overall. The researchers said “associated with” because causation is difficult to prove.

The study did not break out the crime-prevention effect of security patrols versus other BID activities. However, the authors did see a pattern in the BID-by-BID numbers. BIDs that invested heavily in private security and other crime-prevention techniques were among those with the biggest reductions in robberies. For example, the reductions were 27% in the Century Corridor, 20% in the Figueroa Corridor, and 15% in the Hollywood Media District.

The other two studies were farther away. New Orleans found that districts with extra patrols by private security guards or police officers had 23% less property crime than what would otherwise be expected. The effect was limited to the areas patrolled, with no benefit for adjacent areas.

Researchers in England constructed a real-life experiment to test the effect of security patrols on crime. They sent unarmed security guards on extra patrols in randomly selected train stations. Then they measured whether crime went up or down in those stations compared to stations that did not get the extra security guards. They found that the extra security patrols reduced the number of thefts by 22% and crimes against persons by 31%.