A memorial service has been arranged for Caesar Torres, the popular West Hollywood bar manager who was found dead Friday night at his apartment on San Vicente Boulevard.

The service, billed as a “celebration of life,” will take place at 8 p.m. on Tuesday night (Sept. 25) on the second floor of Micky’s, 8857 Santa Monica Blvd. near Larrabee. Micky’s is close to Revolver, the video bar where Torres had once worked as manager.

Also planned is an event called “Hail Caesar” beginning at 6 p.m. on Thursday night at Revolver. An announcement of the event says that 100% of sales will be donated to the National Suicide Prevention Lifeline. 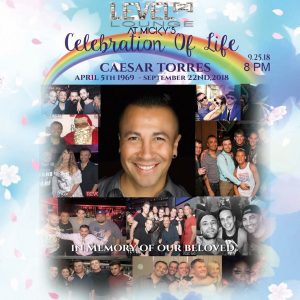 Torres death, apparently a suicide in which he hanged himself, has sparked an outpouring of grief from his friends and patrons of Revolver.

“First person I ever made real friends with when I moved to LA,” one man posted on Torres’ Facebook page. “Met while crying over a breakup. He came up to me and said don’t cry cutie he’s not worth it. Made me laugh and bought me a drink. That was who he was. A sweet, caring person. Really can’t process why he’s gone right now.”

Torres is a native of Austin, Tex., but grew up in Southern California, graduating in 1987 from J.F. Kennedy High School in Granada Hills. Shortly after graduating he took a job as a customer service manager at Central Electric in Los Angeles. From 1996 to 1999 he worked as shipping coordinator at Universal Packaging Systems in Chino and from 1999 to 2002 he also had that role at the China Shipping Container Line in Long Beach. While working in that job he began working in 2001 at Here Lounge, the gay nightclub on Robertson Avenue that has been converted into The Chapel, an adjunct to the famous Abbey Bar and Restaurant.

Torres, who began working at Here right as it opened, held that job until February 2016, when Abbey owner David Cooley acquired Here from owner and founder Pat Rogers. Torres ended up being general manager of Here, overseeing its staff, accounting and most other tasks.

Rest In Peace Caesar – always appreciated your smile and support – and on behalf of many BlockParty staff members who are broken hearted we are so sorry lose you. I wish you knew how loved you are. Sorry I’m out of town and unable to celebrate with you tonite.