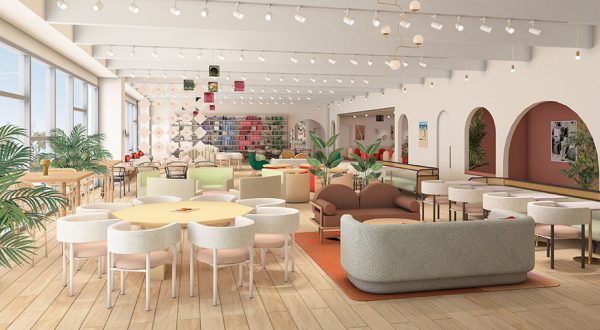 An illustration of the interior of The Wing.

The Wing, a “women’s-focused coworking and networking space” that bars men both from membership and from entering as guests, will be one of the tenants in the three-story building under construction at 8550 Santa Monica Blvd.

It is planning to open in January, occupying close to 9,000. square feet on the third floor of the 8550 building, which also is expected to include a Sprouts grocery store, a gym/fitness studio, a restaurant/café and rooftop parking. The 8550 Santa Monica development is a project of Michael Talla, who owns the building on its west side that houses Capitol Drugs Pharmacy, the LASC clothing store and the 24 Hour Fitness gym.

Curbed Los Angeles, which has published illustration’s of The Wing’s interior, describes it as a co-working space for “those who identify as women or non-binary.” “Non-binary” is a term used to describe people who identify neither as male or female.

The Wing is under investigation by the New York City Human Rights Commission for its policy that states that men cannot become members of The Wing or visit as guests. Jezebel, a website focused on women and women’s issues, has reported in detail about the debate sparked by that policy and New York City’s investigation into it. Supporters of the policy say it provides women with a space where they don’t have to fear aggressive or sexual behavior from men. Opponents argue that it is as discriminatory as policies that would bar people based on their race or ethnicity.

The Wing also publishes a magazine, “No Man’s Land,” which it describes as “the magazine for women with something to say and nothing to prove” and whose title emphasizes its non-male approach.

Membership fees start at $2,350 a year, Curbed LA reports, noting that that is “comparable to the fees at WeWork or membership to social club Soho House, both of which already have locations in West Hollywood.”

The Wing will include meeting rooms, phone booths, showers, lockers, a cafe and bar, beauty and lactation rooms, a library and a gallery showcasing artwork by female artists, reports the Hollywood Reporter. “The Wing has partnered with Hulu, 20th Century Fox, Amazon Video and other entertainment industry heavyweights to hold screenings and experiential marketing events at club locations.”

… we have a favor to ask. In the six years since we first launched WEHOville.com our readership has grown rapidly, validating our belief that the residents of West Hollywood care deeply about this city. What hasn’t grown so rapidly is advertising revenue, which today is a challenge for all news media. That makes it hard to sustain the unbiased coverage we provide of what is really going on, and that makes it hard for us to assemble the resources  to dig deeper into other stories that affect the lives of those who call West Hollywood home.

So you can see why we need your help. Financial support from our readers means our coverage will never be biased by the interests of a wealthy owner or politician. It means WEHOville will always be able to speak truth to power by shining a bright journalistic light on what is really happening in our city.

The best way for you to support delivery of the news you want and need is by subscribing to WEHOville, which means you’ll get a daily alert each morning to all stories published in the previous 24 hours. There are a variety of subscription options, which you can find by CLICKING BELOW. And if you subscribe, we will add you to our growing list of community members who support honest and objective reporting about our amazing city.

Thanks for your support!

Guest
Get over yourself !

Frankly men, your comfort is of no concern to women! Calling yourself a femanist gives you what right to be offended ? I’ve lived in WEHO for 30 years and am a known person, but continue to endure the nastiness of gay men separatists by being ignored by Gay men , told pride parade should only be for men, ignored at the bar trying to buy a drink bc a gay man walked up after me and this is within of our community . I endure straight men feeling like they can say do anything to “change me” and thankfully… Read more »

all the insecure men posting on this story is both hilarious and ridiculous. men can’t take being unnecessary and unwanted. as a male who recognizes that women need safe spaces to connect and work with other women, i APPLAUD this space! there are plenty of other places men can go. get over your egos. as for the women who can’t comprehend why this is necessary, that is appalling. of course women don’t trust men. if a woman doesn’t get this than she must be completely tone deaf. this looks like a beautiful space. this male feminist says to his sistas… Read more »

Dear BLT…don’t fancy yuurself a male feminist. Consider yourself a gender seperatist looking for validation from where it will not come. Much like a log cabin republican……..wait…Milo is that you?…..you sly puss….

I suppose if it is a private, membership club they can probably legally get away w/ discriminating against men (although not 100% sure about this). But let’s be honest: If it were a “boys only” club, women would be up in arms about it for sure and it would NOT happen.

Also, its odd that it’s in West Hollywood considering all of the gay bars in We ho -even the primarily male-dominated ones -are open to women. Why the double standard?

I think that this is fabulous, I totally support it and wish them well.

Now can we please have a men’s only gay bar that does not allow women in? I’m tired of having a drunk, sweaty girl cxxk blokibg me from a really cute guy that I would like to hook up with.

If girls can join Boy Scouts, then we should be able to join the club.

Anyone who has a problem with this is an idiot. Men prey on and harass women. Women rarely do that to men. Hence, it’s fine to have women-only spaces. Grow up, misogynists.

I, for one, applaud a male free work environment for women.

Now, can we have at least a female free night at The Abbey? I’ve seen on line that a gay bar in, i believe, Sydney (Australia) has a weekly male only Saturday night. Are you listening, David Cooley?

I am a proud male feminist, but I deeply resent the implication that there needs to be a provided in our City a space where women “don’t have to fear aggressive or sexual behavior from men.” That’s a paranoid and misandrist assumption that lumps all men together just because the Harvey Weinsteins of the world have committed atrocities against women in the workplace. I’m all for Women in Film and other professional women’s organizations, but once we start declaring whole “spaces” as exclusionary, then we go against the values and principles of equality that the City of West Hollywood was… Read more »

Amen Ken. NOT ALL MEN ARE PREDATORS. This is not feminist. This is separatist . I am so confused about these “safe spaces”…all spaces should be safe spaces and if not should be forced into becoming safe spaces. ….I can personally tell you about two male friends who were physically and sexually abused by their mothers. They don’t seek safe spaces from women, although clearly they have every reason to. This is not an idea that West Hollywood should be supporting. I see nothing but controversy and problems from this…..because if it happens, I can guarantee, men will want separate… Read more »

Women-only gyms have faced lawsuits in other states and lost. CA has a law prohibiting gender discrimination in businesses. The owners of The Wing aren’t dummies- they know all this. This feels like part corporate philosophy, part publicity move. The state will probably overturn their man-ban but it won’t matter. Men won’t pay to join a women’s club anymore than women were clamoring to get into male bathhouses, or white co-eds are invading black student unions. The Wing will be just fine.

Like @Jimmy Palmieri, I do not feel comfortable with this. I believe we all should make better efforts at making all of our public places a space where women don’t have to fear aggressive or sexual behavior from men.

I would like to hear from more women on this though.

i guess i thought this is what the Abbey was for..

Good observation Brad. But, this is wrong on so many levels. This is totally opposite of what West Hollywood is about and it is a slap in the face of our history, our progressiveness and our inclusivity. We are a Community of diversity. We don’t discriminate. We present ourselves as one of the most progressive Cities in the Country. This will set us back to the 50’s when there were “Men” only clubs like the Hollywood Athletic Club. Women have been complaining about being treated “less than” men for years and being excluded and now this group wants to do… Read more »

As a gay adult male who suffers severe psychological trauma from not having been nursed as a child, I have a phobia of being in the presence of pregnant or lactating women. I am going to discuss with my psychiatrist my need for spaces safe from the images of this stressful childhood abuse.