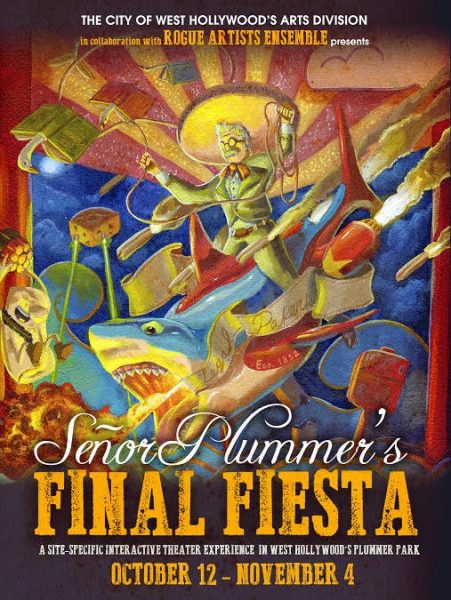 Award-winning artists’ collective Rogue Artists Ensemble takes over West Hollywood’s Plummer Park through a commission from the City of West Hollywood’s Arts Division for “Señor Plummer’s Final Fiesta,” an immersive theater experience celebrating the life of Eugene Plummer, a champion of community in early Los Angeles and a prominent figure in what is now West Hollywood. Opening Oct. 19 (with previews on Oct. 12-14), “Señor Plummer’s Final Fiesta” stirs up a band of ghosts and shadows who sweep you into a past filled with wild west duels, pirates, land-grabs, violent mobs, shark-riding, romances, epic court battles, and, of course, fiestas.

Told through a patchwork of tall tales, large-scale puppets, masks, and music, Rogue Artists Ensemble electrifies Señor Plummer’s whimsical tales of early Los Angeles in a memory map that reflects back to the communities of our modern city. The show is written by Diana Burbano, Tom Jacobson and Chelsea Sutton with Rogue Artists Ensemble and directed by Rogue’s artistic director Sean T. Cawelti with assistant director Julia Garcia Combs. It features original music by Adrien Prévost.

The show pulls you into the middle of the late 19th century and early 20th century Los Angeles. It’s 1942 and you receive an invitation to the book launch of “Señor Plummer: The Life and Laughter of an Old Californian,” Eugenio Plummer’s (mostly) true account of his life in early Los Angeles. You arrive in the newly dedicated Plummer Park, only steps away from where Plummer himself has lived since 1877. From Señor Plummer’s darkest nightmares, to his most luminous joys, you will be armed with only a treasure map of the mind of Señor Plummer, the original resident of West Hollywood.

“This is a once in a lifetime project where we get to tell the story about a real figure in our city’s history in the same place that he once lived so many years ago,” says West Hollywood Mayor John Duran. “Eugene’s story encapsulates so much of the change and challenges of this city that are still very much a part of our modern lives.”

The play takes place in the Great Hall and Long Hall and the connected rooms and courtyard at Plummer Park. Audiences will experience a multitude of stories from Eugene Plummer’s past and the history of Los Angeles – and they will be able to pick and choose which paths and characters they follow.

“Creating the experience as an immersive and interactive piece allows us to place the audience into the world of the play,” says director Sean T. Cawelti. “The audience will have the chance to interact one on one and learn from the characters and be a part of the story themselves. With so many possibilities and stories to explore there is no way you can see the entire show in one night. Everyone’s experience will be unique, helping to encourage community dialogue and hopefully do the very thing Eugene tried, bridging communities.”

“Señor Plummer’s Final Fiesta” commemorates the 75th anniversary of the publication of the book “Señor Plummer: The Life and Laughter of an Old-Californian,” first published in 1942, which documents interviews with Eugene Plummer by John Preston Buschlen.

“Señor Plummer’s Final Fiesta “runs Oct. 19 through Nov. 4, with performances on Thursdays, Fridays, Saturdays and Sundays at 7:30 p.m. Preview performances take place Oct. 12–14. Tickets range from $35-$55, which include options for performance with drinks provided by Angel City Brewery. In addition, there are a minimum of two $20 community discount tickets available to each performance. In order to be considered, please fill out the “Community Ticket Survey” on the Rogue Artists website. Plummer Park is located at 7377 Santa Monica Blvd., For reservations and information go to RogueArtists.org.

“Señor Plummer’s Final Fiesta” is rated PG-13; it includes mature content and is not intended for young audiences.

… we have a favor to ask. In the six years since we first launched WEHOville.com our readership has grown rapidly, validating our belief that the residents of West Hollywood care deeply about this city. What hasn’t grown so rapidly is advertising revenue, which today is a challenge for all news media. That makes it hard to sustain the unbiased coverage we provide of what is really going on, and that makes it hard for us to assemble the resources  to dig deeper into other stories that affect the lives of those who call West Hollywood home.

So you can see why we need your help. Financial support from our readers means our coverage will never be biased by the interests of a wealthy owner or politician. It means WEHOville will always be able to speak truth to power by shining a bright journalistic light on what is really happening in our city.

The best way for you to support delivery of the news you want and need is by subscribing to WEHOville, which means you’ll get a daily alert each morning to all stories published in the previous 24 hours. There are a variety of subscription options, which you can find by CLICKING BELOW. And if you subscribe, we will add you to our growing list of community members who support honest and objective reporting about our amazing city.

Thanks for your support!