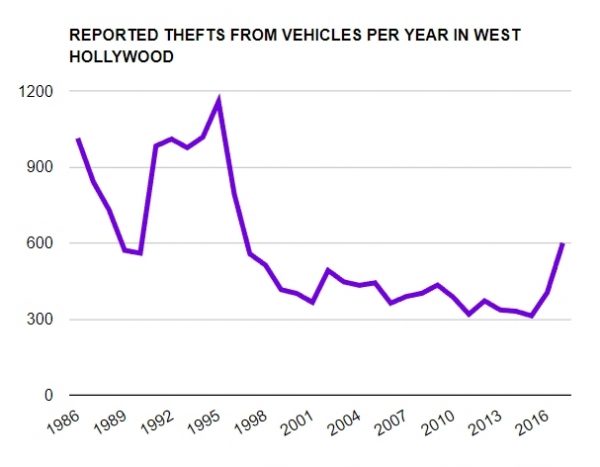 Thefts from vehicles in West Hollywood almost doubled from 2015 to 2017, while nearby communities also experienced high levels of thefts. That is according to a new report by WeHo by the Numbers, based on data from the city and the California Department of Justice.

West Hollywood’s recent increase in thefts from vehicles was unusual compared to many cities, but not so unusual when compared to Culver City, Beverly Hills and Santa Monica. In 2017, the county as a whole had almost no increase, but the Westside cities all did. They were in the top quarter of cities in the county based on their percentage increases.

West Hollywood and Culver City both had one-year increases of about 50%. Only one city in the county, Walnut, had a bigger one-year percentage increase (not counting cities with very few thefts). Beverly Hills and Santa Monica saw smaller but still significant increases of about 30% and 20%, respectively. The numbers for the City of Los Angeles rose a bit less than 10%.

Over a 10-year period, West Hollywood’s percentage increase of about 50% was still high compared to many cities. However, it was lower than Culver City, Beverly Hills, Santa Monica, and 10 other cities in the county. The City of Bell had the biggest jump in the county at 280%. Culver City was second with roughly 160%. Beverly Hills came in fifth with an increase of about 100%. Santa Monica was ninth at 60% or so. The county as a whole saw a decline of more than 10%. Los Angeles had a drop of roughly 25%.

The City of Los Angeles as a whole had only 5 thefts per 1,000 residents. However, the available numbers suggest that the theft rate is higher in Los Angeles neighborhoods adjacent to West Hollywood. The report estimated 21 thefts per 1,000 residents in the Fairfax District, well above West Hollywood’s 17. The estimate was 15 for both Hollywood and Beverly Grove, a level similar to the other Westside cities.

To find out more, see the full report, Is the number of thefts from cars in West Hollywood unusual?

Missing from the discussion is who the people are that are the perpetrators in West Hollywood’s crime problem and, what their motivations are. From what I can see and what I get from our Security Ambassadors and Sheriff’s Deputies, the overwhelming majority of the crime is being committed by nonresidents passing through and in many instances came here for the sole purpose to commit a crime in the first place. West Hollywood is seen as an “easy mark” by many predatory criminals because the place lacks a tough or dangerous reputation, they wouldn’t even consider rolling into Compton and causing… Read more »

You have been drinking way too much of the AM Talk Radio Kool-Aid, reality is that living in a house with a gun does nothing to enhance your safety but drastically increases your odds of death because of it! The chances of suicide (more Americans die from gun suicides every year than gun homicides) and a fatal accidental shooting are more 10 times higher than that of someone with the sense not to have one in the first place. Even in the instances of robbery or home invasion, the chances are far greater that your gun will be turned against… Read more »

Thank you Cy for this information!

This town has always been like a candy store for small time crooks. Even before cityhood house and car burglaries were common. This area used to be a county backwater (many who lived here then like it that way – isolated) and police had to check their maps to find us. Once, we had COPS teams on bikes as a regular feature. Now? Since I don’t get out of the house much any more bike patrols may be happening. The city’s WATCH program needs a jab in butt and residents need to get more involved.

That’s a bad idea! If we moved all of the poor people to DTLA West Hollywood would be over run by all the dangerous wealthy criminals who are stealing cars and committing other crimes. What we should raise taxes on multimillionaires for all the problems they are creating in society! Also abolish their tax shelters and tax credits they use to avoid paying taxes all together in many cases. Make sure the capital-gains taxes are always greater than pay role taxes to keep it fair. The Case for Low Capital-Gains Taxes Grows Weaker, the evidence shows that rate cuts in… Read more »

Crime is everywhere. This happens because people leave items in their car that attract theifs. Crime is a fact of life. Eternal vigilance is the price of safety. We have to be more smart than the thieves. Don’ t make it easy for them.

Just get them off the streets into shelter.