The evolution of West Hollywood’s Sunset Strip continues with the sale of the property on the south side of Sunset from San Vicente Boulevard to Larrabee street for $80 million.

The sale, first reported by L.A. Business Journal, includes the building that currently houses the famed Viper Room nightclub at 8852 Sunset Blvd. Other businesses on the block are the Aahs costume store, Bar Code barber shop, the Liquor Market and Ta-Ke Sushi and Amarone restaurants. It also includes a lot at 1029 Larrabee just south of the intersection with Sunset. The businesses are housed for the most part in one-story buildings. 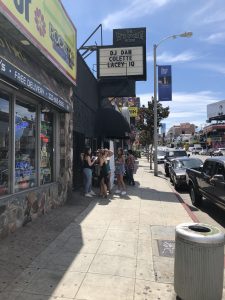 The Business Journal quotes CoStar, the real estate market analytics company, as saying the businesses, with their rear parking lots, cover 16,000 square feet of the 38,000 square feet of land on which they sit. The buyer is identified as 8850 Sunset, a limited liability company based in Scottsdale, Ariz., whose public records don’t disclose its owner. However, a representative for the company has said it hasn’t yet decided what to do with the property, on which it closed on June 15. The demolition of the buildings on that block for construction of new ones is likely to draw objections from fans of the Viper Room, which remains a popular rock music club. It originally was a jazz bar called the Melody Room, a hangout of mobsters Bugsy Siegel and Mickey Cohen. It became a club called the Central in the 1970s and 1980s. Then Johnny Depp and others bought it and turned it into the Viper Room in 1993.

The purchase is another in a long series of changes on the Sunset Strip that led Businessweek, in a 2014 story, to say the sound that best identifies the Strip these days isn’t rock music but that of “buildings being demolished and new ones developed.”

Among the changes are the planned closure of the Hustler store and its replacement by the exclusive London-based Arts Club, the demolition of the famed House of Blues to be replaced by the Sunset Time and the opening of new hotels such as the Jeremy and soon the Edition.

I managed the Viper Room for the first 3 1/2 year it was open. Tear it DOWN!

And don’t try to park behind the businesses in the parking lot off San Vicente. As a customer of Barcode Barbershop, I’ve used the parking there for many months as directed by the business. I was informed today by a parking lot monitor I was no longer allowed parking. The new “situation” definitely sends a “we don’t want you here” message, which can only be reflective of the new ownership. Parking is easily found on Sunset with a meter, haha. Thanks Weho.

I am praying they keep the viper room as well as Aahs! Viper Room has great bands and it’s history should not be thrown away. Aahs is just super convenient as a gift store. I don’t mind bringing some new energy into the strip, but I really don’t want another monster hotel going up. We’re about to get the Edition, we already have the London right there. Hopefully we can get some fun shops and a good restaurant.

Where is the West Hollywood City Council? Headed up by John “Grindr Boss Tweed” Duran they are lined up offering pay for play approval for the development to pass.

Someone has got to stop these people from continuing to destroy what makes Hollywood a place people want to visit. If they keep destroying the history of it, what point will there be in anyone going to visit it? All their overpriced hotels and apartments no one can afford will sit empty after they’ve taken away the reasons people go.

I Don’t Think Anyone Has Gotten Paid To Play A Gig On Sunset Boulevard Since 1989.

So, $80M for the block and they don’t know what they will do with it yet? WeHo around the Strip is slowly becoming a bore, lifeless of what has been it’s energy since the 60’s, the music and sub culture scene. If the council had the spine they’d put a stop to this rampant retail and hotel development. What’s next, The Whisky?

Many a’good nights at the Central and Viper! Soon the Whisky, Rainbow, Comedy Store and all the rest will be bulldozed too.

It will be demolished like so many things along there and replaced with yet another huge hotel. Hold tight to your memories, it’s all that will be left. The worst thing is, developers are not interested in building any new entertainment venues or great looking clubs for a new generation. WeHo doesn’t even have a movie theater complex…and you can’t count the Studs! The Creative City in the heart of the Film Capitol of the World…and not a single first run movie house. Pathetic.

In the 70’s, the Viper Room was Filthy McNasty’s.

Where is the West Hollywood City Council? They have done NOTHING to preserve the cultural and architectural legacy of the Strip. Their “booster” mentality is ruining what’s left of this city’s heritage. Enough already. Despicable.

Duran is a hypocrite!

Another one bites the dusts! There will be nothing left of WeHo that the city once wanted to make a global brand. Whelp, they did, but we stupidly believed we’d recognize one iota of our once beloved city. Gone are the gays, here are are the strays that come and go, raise our rents, make a buck and with a middle finger close down and leave. Thanks Duran!