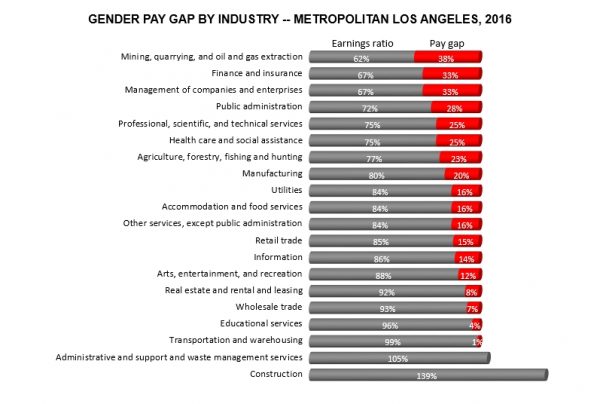 West Hollywood’s gender pay gap is smaller than average for residents and workers, especially at City Hall. That is according to a new report by WeHo by the Numbers, based on census data and a government-pay database.

The gender pay gap is the difference between women’s earnings and men’s earnings. For example, in 2016, women working full-time in the US earned 80% of what men earned. That is called the “earnings ratio.” It means that the gender pay gap was 20% The gap is a broad measure of inequality. It does not say anything about causation. It does not specifically test whether women are getting equal pay for equal work.

The gender pay gap varies widely by industry. In the Los Angeles region, it ranges from zero% to 38% across 20 broad industry categories. Some of the larger gaps are found in finance and public administration. The two industry categories with no overall gaps are administrative, support, and waste management services and construction.

The report looks at three groups in West Hollywood: City Hall staff, everyone working in the city, and residents. The estimated earnings ratios ranged from 93% to 100% Therefore, the pay gaps ranged from zero% to seven% That is smaller than average. In 2016, the gap was 20% in the U.S., 12% in California, and 10% in the Los Angeles region.

Based on the report’s rough estimates, West Hollywood had no gender pay gap among City Hall staff in 2016. The numbers do not include the Los Angeles County Sheriff or Los Angeles County Fire Department. Those organizations serve the city, but they have their own staffs and make their own personnel decisions.

The estimates suggest that West Hollywood was the only Westside city without a gender pay gap among its staff. A big part of the gap in the other cities came from their fire and police departments. They had higher average pay and a higher percentage of men on staff. When the fire and police departments were excluded from the calculations, the gaps disappeared in Santa Monica and Culver City.

Among West Hollywood residents, the gender pay gap was seven% between 2012 and 2016. The median woman made 93 cents for every dollar the median man made. However, the margin of error is wide for this Census Bureau estimate. The gap could have been much bigger or non-existent.

The gap was similar for Culver City residents: five% Santa Monica and Beverly Hills had bigger gaps, 19% and 38% respectively. Los Angeles had almost no gender pay gap among residents — two% — but it had lower median incomes for both women and men.

The report estimates that the overall gap for people working in West Hollywood was somewhere around five% from 2012 to 2016. The numbers for the other Westside cities were probably in a similar single-digit range.

To find out more, see the full report, How big is the gender pay gap in West Hollywood?

Guest
Duran is a hypocrite!

@DigDeep preach! Start with a certain city council member who professes to “ love lesbians,” but his private life, words, and actions prove otherwise .
Talking to you Duran!

By many accounts, The City has a gender RESPECT gap that you should study.

Great report.
Me must reach and achieve parity in all sectors.