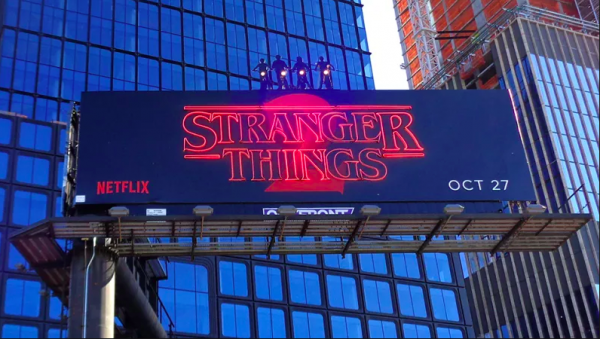 Soon you’ll be watching Netflix in your car. If you’re driving on the Sunset Strip, that is.

Reuters reports that the subscription-based film and TV-show streaming service will own up to 35 billboard displays along the Strip in a deal expected to close in July. It will use them only to promote itself and not shows from CBS or HBO or other businesses currently promoted on the billboards, which are owned by Regency Outdoor.

What Reuters says is a $150 million deal will benefit Netflix financially over the long run, given its plans to release more than 700 original films and TV series this year.

In an interview with Reuters, Gino Sesto, founder of Dash Two, an outdoor and digital ad agency, noted that it costs an average of $25,000 a month to rent a billboard on the Strip. By owning the billboards, Netflix only will have to pay the small cost of replacing the signs and maintaining the billboard structure. It also won’t find itself hit with annual increases in advertising costs.

The Reuter’s sources told Reuters that Netflix decided to buy only half of Regency’s assets for $150 million, to focus on the Sunset Strip in a deal expected to close in July. It is also considering acquiring other Regency billboards in Hollywood, such as near the Dolby Theatre, home of the Academy Awards, they added.

Regency Outdoor, headquartered at 8820 Sunset Blvd., is known for its litigious behavior, both internally and externally. In 2013, Drake Kennedy, part owner of the company, sued his brother Brian Kennedy. In the lawsuit, Drake Kennedy claimed that Brian struck a secret deal with a senior manager at Regency to transfer ownership of one of the company’s “crown jewel” properties on the Sunset Strip at Sunset Boulevard and Queens Road, site of four of Regency’s most valuable billboards, to a separate company in which Drake has no ownership interest.

A number of Regency’s battles in Los Angeles (and West Hollywood) were documented in a 2005 Los Angeles Times story.

For example, former West Hollywood Deputy City Manager Joan English claimed she caught Brian Kennedy attempting to construct a 40-foot billboard at Sunset Boulevard and Queens Road without a permit on New Year’s Eve 2004. The L.A. Times reported that Kennedy picked a day City Hall was closed and had a canvas draped over a fence to conceal what he was doing.

Former West Hollywood Councilmember Steve Martin claimed a $10,000 bribe was offered to him in February 2003 by a former city planning commissioner on behalf of Brian Kennedy, who wanted him to vote against a Regency competitor’s request for city permission to maintain ads on the side of a building on Beverly Boulevard.

Furthermore, according to the LA Times, as of 2005 West Hollywood was trying to figure out who was illegally and often radically trimming trees along the Sunset Strip in the middle of the night. The story notes 27 of the 43 trimmed trees were in front of Regency signs.

Regency also fought Ace Outdoor Advertising over a “tall wall” on the west facing wall of the building at 8730 Sunset Blvd. near Sherbourne. And In September, Regency threatened to sue if the City Council approved a v-shaped billboard atop the Grafton Hotel. Regency originally had filed the application for the billboard on behalf of the Grafton, but later became embroiled in a dispute with the hotel and requested to remove its application. The City Council still approved the application.

More recently, Regency launched an unsuccessful campaign to get residents to demand that the City Council reconsider its approval in February of last year of an Ace Outdoor billboard at the Rainbow Room on Sunset Boulevard. Campaigners for Ace took advantage of West Hollywood’s progressive reputation by telling local voters that the Kennedy brothers had donated to the Donald Trump presidential campaign.

The Kennedy brothers, through their West Hollywood Properties LLC, have been active donors to local political campaigns. For example, they donated to the unsuccessful 2015 campaign of Heidi Shink for a City Council seat. Regency itself donated more than $20,000 to Mayor John Duran’s unsuccessful 2014 campaign for a seat on the L.A. County Board of Supervisors.