West Hollywood’s special events budget has nearly doubled in three years. That is according to a new report by WeHo by the Numbers, based on city budget documents.

The report splits the cost of special events into three pieces. The first is money to pay for the events themselves. For example, the city pays a company to produce the Halloween Carnaval. The event budgets for all special events total $1.5 million in fiscal year 2019, which starts on July 1, 2018, and runs through June 30, 2019.

The second piece consists of event-related public safety costs. This piece is a bit larger, budgeted at $1.8 million in FY2019. The two biggest events — Halloween and the Pride parade/festival — account for 99% of these costs. 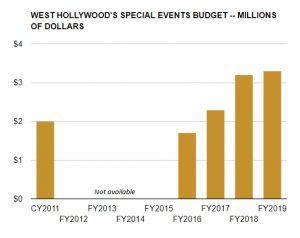 The third piece is the value of the time devoted to special events by city staff members. The report does not have current data for that piece. In 2011, the city estimated it was about $700,000. If the number grew at the same rate as other special events costs, it could be $1.1 million today.

With the three pieces added together, the cost of special events probably exceeds $4 million per year. The report does not attempt to quantify other potential pieces such as waived fees, city overhead, or sponsorship revenue.

The rest of the report focuses only on the first two pieces: event budgets and public safety. Those are the pieces for which current numbers are available. The city has budgeted $3.3 million for them in FY2019.

The special events budget increased 94% in the last three years. It went from $1.7 million in FY2016 to $3.3 million in FY2019. The jump is not quite as large over a longer time period, from 2011 to FY2019. The budget grew 65% over that period, from $2 million to $3.3 million. The 2011 total included four high-dollar events that are not in the FY2019 budget: the AIDS Walk, the book fair, the library dedication, and the Sunset Strip music festival. Together, they were budgeted at over $400,000. Their absence from the FY2019 budget partially offsets growth in other special events costs.

The Pride parade/festival budget more than tripled since 2011. It went from roughly $250,000 to over $900,000, a 260% increase. The three-year growth was 160%. One part of the increase was the introduction of city-funded onsite emergency medical services in tents at Pride and Halloween. Those services are currently budgeted at almost $275,000.

Six other events have budgets above $25,000. The amounts are roughly $94,000 for the Russian Cultural Festival, $65,000 for the Women’s Leadership Conference, $40,000 each for One City One Pride (a series of 30 different events) and the Pacific Standard Time exhibition, $36,000 for the WeHo Sports Festival, and about $29,000 for National Night Out gatherings across the city.

To find out about the cost per attendee, see the full report, How much has West Hollywood increased spending on special events?