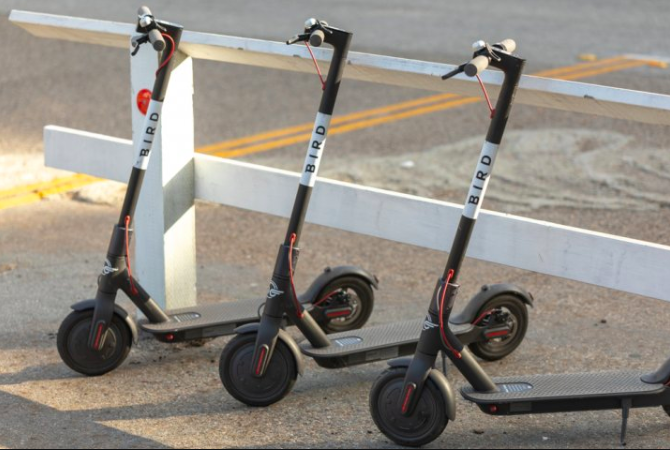 The City Council  voted Monday  night to ban electric shared scooters (and bicycles) in West Hollywood and rejected a proposal by City Hall staff to launch a pilot program to test ways to regulate the increasingly popular vehicles.

The city’s Public Works and Planning and Development Services departments brought forth the proposal in response to a “rogue launch” on March 30 by Lime Scooters of its scooter fleet in West Hollywood. Lime distributed scooters around the city that could be rented via a mobile phone app. A rider was able to drop the scooters wherever he ended his trip, and Lime used GPS technology to track and recover them.

The proposed pilot project would allow a maximum of three companies to each located up to 50 scooters within West Hollywood for six months. The companies would be required to share ridership data with the city, which would put restrictions on hours of operation and location of the scooters.

The pilot project drew opposition from Manny Rodriguez, a resident of West Hollywood West, who contested the argument that use of scooters protects the environment by reducing driving of cars.

“We do not live in a movie studio back lot, a college camps or an Amazon warehouse,” Rodriguez said. “…. Our city should not bargain with companies that depend on the public space for their private gain.”

Councilmember John Heilman said he opposed the pilot program in part because of Lime’s unauthorized launch in West Hollywood, which he likened to a company dropping vending machines on city sidewalks.

“It’s actually quite outrageous for a company that knows that they don’t have permits to do this…. ,” Heilman said. “I think that’s just really a very bad business tactic.”

He described the use of scooters as “a joy ride. They don’t have helmets, they’re not respectable of pedestrians on the sidewalk.”

Mayor John Duran also opposed the pilot program, arguing that the city’s sidewalks already are congested. The proposed pilot program would bar scooters from city sidewalks, however they already are being ridden there.

Councilmember John D’Amico supported the pilot program and suggested giving the city’s Transportation Commission the discretion to increase the number of permitted scooters if there wasn’t an adequate supply of them in certain areas of the city.

D’Amico noted that the scooters already are being ridden into West Hollywood from nearby cities.
“I’m definitely not interested in posting officers at the borders and telling them that ‘you have to get off’,” he said.

“Now, what do we do when people ride them?” D’Amico asked after his fellow Council members voted to ban them. “Are we creating another category of miscreants?”

Dan Mick, the city’s code compliance supervisor, said it isn’t illegal for individuals to drive rented scooters into West Hollywood nor is it illegal for WeHo residents who own their own scooters to drive them, so long as don’t use them on sidewalks.

Tara Worden, an assistant city planner, said that if scooters are left parked on sidewalks, the city would more easily be able to figure out who had left them if it were collaborating with the scooter rental companies in a pilot program.

Representatives from Lime and Spin Scooters spoke in favor of the pilot program. Bird, a Santa Monica-based scooter rental company whose vehicles are seen on WeHo’s sidewalks, did not offer an opinion on the proposal.

what a bunch of old fogies in WeHo! You all might as well just be yelling “GET OFF MY LAWN YOU DANGUMIT KIDS WHY I OUGHTA!”

You would think a city with ridiculous parking problems would welcome an alternative mode of transports. Have you ever tried to park when you go to visit any friends in West Hollywood? It’s pretty much impossible.

I think the companies just needed to grease the pockets of lawmakers in one way or another and this would have been fine – I guess that’s their fault, though.

Great, West Hollywood. I was looking forward to using them for short errands, with my backpack. Now I will be forced to use my car instead.
Great for the environment…

I am happy to hear of the ban. Weho is too dense in population to have these. We already have to maneuver around the homeless, dog poop, skateboarders, pot shop bouncers, skateboarders, non-motorized child scooters, and bicyclists (afraid of the street). We don’t need these things. And they go fast. Faster than the speed of a bicyclist would go on the sidewalk. Where i work, they are found abandoned in elevators, blocking doorways and handicapped access. They even are found in the street. Speaking of street, i saw someone riding one in a lane on Santa Monica blvd during the… Read more »

Can’t believe the city voted as I would. I think a first. Great idea at first but the risk of collision is too great. Congrats. West Hollywood, well done.

The California Vehicle code requires that : 1. Motorized Scooters may only be operated by drivers with a valid license or learners permit, 2. May not be ridden on the sidewalk (no motor vehicles are permitted on the sidewalks ). 3. Riders must wear helmets. 4. Riders may not carry passengers. 5. The motorized scooters are limited to 15 mph. 6. Must have brakes and a motor kill switch. 7. Must have lights front and rear. In a walk this evening down Santa Monica Blvd between Crescent Heights and Kings Rd I encountered about a dozen riders on E-scooters. All… Read more »

Three Bird scooter riders passed me today at 2:00 p.m. within 2 blocks of City Hall. Two teenage riders were riding together on the sidewalk. It’s a hazard to pedestrians to allow these on the sidewalk.

I think the same rules that apply to bicycles should apply to these scooters, if they’re allowed at all.

Clearly, these companies did not make campaign donations to the right City Console Members.

Guest
Tired of it.

How can you say it’s not about campaign contributions. Both John H. and John D. who are known as pay for play Council Members, come up with sad excuses for there no votes. Your right Tired of it, that had nothing to do with it.

Guest
Tired of it

First of all, they’re not up for re-election for 3 more years. Second, show me the proof of your baseless accusations!!! Or are we just supposed to take your word for it. 🙄

OCH! What are you implying?? Can’t be possible or could it.

The only people against this program are older. Simple solution would be to make it mandatory to ride in the bike lane. Wow, what a difficult fix smh. YOU PEOPLE ARE MAD ABOUT SCOOTERS. Get a freakin life

Right, our hips could not take being knocked to the ground by a 150 lb. force but yours could! Your solution sounds good however. Gotta wonder

So they are banned because the city won’t make money off of them? Very short sighted.

I’m sick and tired of people banning bikes and scooters from sidewalks. I’ve rode my bike and my scooter on the sidewalks in busy areas and I’ve hit 0 people. If people riding bikes or scooters ride at a slow speed in congested parts of sidewalks and observe all doors and driveways there really isn’t an issue.

Bikes are legally allowed on sidewalks, except where expressly prohibited, between Flores and Doheny (or so, on SMB). As a matter of courtesy, I never ride mine on one, except in rare cases where there isn’t enough road for to safely bicycle, such as between Sweetzer and Crescent Heights on SMB (where I was almost completely taken out by a large pick up truck, once). When I feel the need to do that, I’m very cautious and slow and perceptive of my surroundings. I try to avoid major thoroughfares as much as I can, so this isn’t usually something I… Read more »

I didn’t have an opinion on these scooters until today. Walking to Target, I was nearly hit 3x in a row, by 3 people riding these on the sidewalk, going so fast, they literally owned the sidewalk. I guess I no longer care to have them, since I am already ducking bikes, skateboards, single wheel motorized something or others, and auto walk things that look like mobile foot massagers. There is barely enough room for pedestrians, wheelchairs, baby strollers, and disabled folks with walkers. ENOUGH WITH MOTORIZED CONTRAPTIONS ON THE SIDEWALK. Someone is gonna get hurt. Just a reminder….people bruise… Read more »

I do not think anyone advocates irresponsible use of these electric vehicles. But there are people who text and drive. Drink and drive. Smoke and drive. There are people who ride their bicycles on sidewalks where it is illegal (between Kings and Doheny-ish). Should we outlaw all bicycles and automobiles, as a result? This “ban” does nothing, as far as I can tell. I watched the City Council meeting, and the discussion that was had. One cannot be issued a citation for riding and dropping one of these in West Hollywood. Or even for renting one within the city limits.… Read more »

I don’t think scooters should be banned, necessarily, but encouraging their use and having them share sidewalk space with pedestrians was too much.

When people can’t look up from their cell-phones, it seems best to avoid a potential hazard.

A 360° change from the last article and I have to say that this tack makes more sense to me.