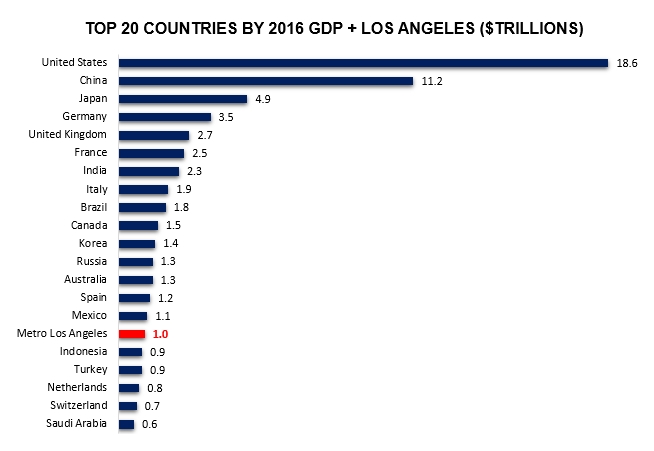 West Hollywood has a $3 billion economy, larger than the economies in 33 small countries. That estimate comes from a new report by WeHo by the Numbers.

The report measures the size of the local economy in terms of gross domestic product (GDP). GDP is the sum of the economic value added in a geographic area. Put another way, it is the dollar value of final goods and services produced. It avoids double-counting the value of intermediate goods and services, such as the flour used to make bread.

California’s GDP was $2.7 trillion in 2017, the biggest in the country. It represented one-seventh of the national economy. Texas’ economy came in second. It was about 40% smaller than California’s. Both California’s population (40 million) and its GDP per capita were bigger than that of Texas.

If California were a country, its economy would be the fifth-largest in the world. The U.S. as a whole, China, Japan, and Germany would come before California. The United Kingdom, India, France, Brazil, Italy, and many others would come after it.

Metropolitan Los Angeles had a $1 trillion GDP in 2016. That was almost 40% of California’s total. The state’s second and third largest economies were in the Bay Area. Together, metro San Francisco and metro San Jose represented a quarter of the state’s GDP.

If metro Los Angeles were a country, it would be ranked sixteenth as of 2016. It would be just behind Mexico and just ahead of Indonesia.

If metro Los Angeles were a state, its economy would be the fourth largest in the country as of 2016. The only states with bigger economies are California, Texas, and New York. On a list of all state and metro areas, Los Angeles would be ranked number five. Metro New York would come in at number two. It covers parts of four states.

GDP is typically measured only for larger geographic areas, such as countries, states, or metropolitan areas. The report uses census data to allocate a portion of the metro Los Angeles GDP to West Hollywood, one industry at a time.

The report estimates West Hollywood’s GDP to be $3.3 billion as of 2016. That is the economic value added within the city by workers, businesses, government entities, and non-profits. It excludes the economic value residents created when they worked outside the city. That value would be counted in another city’s GDP.

West Hollywood’s economy is only 0.3% of metro Los Angeles’ $1 trillion total. However, the city’s GDP is still more than that of 33 small countries, including many island nations.

West Hollywood’s GDP per capita (per resident) is higher than average for metropolitan Los Angeles. The GDP per worker appears to be below average.

For more information, see the full report, How big is West Hollywood’s economy?

“SHOW ME THE MONEY!” Where is all the revenue going?

Such BIG MONEY anywhere would be too much for even the ‘so called honest Officials” over time, to not dip into such a large regular income that nobody would notice was missing.

Few,.. If any “honest city officials’ could even make that claim with the known formal allegations against so many over so many years.

Given recent events, some of West Hollywood’s leadership does seem to have the same attitudes and sense of entitlement as leaders of certain backward Third World countries. It is funny to think that back in 1984 the County was worried that if West Hollywood actually incorporated as an independent city that we could have to get by on a paltry budget of approximately $25 million. Fortunately we ignored the naysayers. I suppose it would be in bad taste to ask if we were happier in our City twenty years ago when our economy was more modest. While we have much… Read more »

Counting my blessings to live in West Hollywood. If you don’t appreciate our social services then you miss the heart and soul of what John Heilman and others have built. My brother lives in Hallandale Beach Florida and recently became very ill. Diagnosed with Cortical basel degeneration he cannot talk or walk or speak but he knows everything thats going on. One phonecall to Hallandale Beach city hall to ask about their mobility programs since Ronnie will never drive again. There is no dial-a-ride program to pick up and drop off any ailing senior or patient with cancer or aids… Read more »

Thank You for the very excellent points about the Great City of West Hollywood! I have seen this City take care of people’s health care needs including the handicapped, where as other places especially with significant conservative republican influence give a very Hobbesian line of “hey that’s what death is for!” It was some people who work with the City of West Hollywood Social Services Division that helped me overcome many problems I at one time thought were insurmountable. Facing a great deal of employment and housing discrimination elsewhere, they were able to find me work immediately and housing as… Read more »

West Hollywood is so cheap they can’t afford to put a left turn signal northbound at Crescent Heights and Fountain but have no problem backing ludicrous bicycle and motor scooter program plus building a garage behind City Hall to accommodate some of the highest paid people in West Hollywood, civil servants.

Vote the crackers that run WEHO off the City Council and fire the overpaid City Manager who lives in Pasadena for openers.

OMG! You Read MY MIND!!! And you have the same name too!

Kind of like my reaction when I found out that I was NOT the only Husain (with a few variations of the spelling) at Occupy Wall Street or the WTO (World Trade Organization) protest in Seattle! 😲