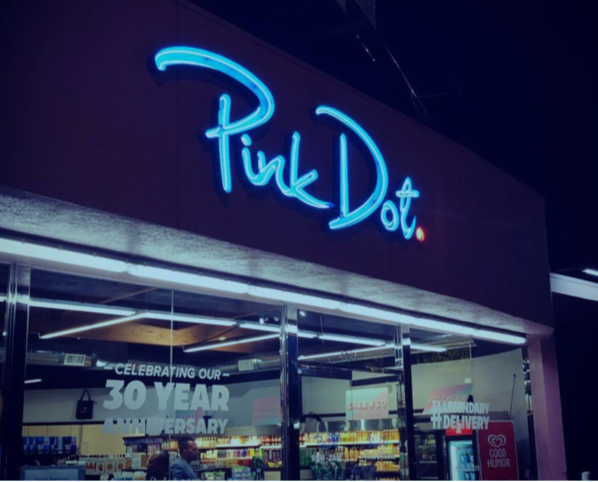 Pink Dot – the popular store that still delivers its top-selling products of alcohol, cigarettes and condoms in polka dot-covered Volkswagen Beetles – became a West Hollywood institution almost from the day it opened on the Sunset Strip in 1987.

Thus a legend was born, says Thrillist.com, a website that tracks the best and most underappreciated places to eat. Pink Dot became “the grandfather of the ‘we’ll-give-you- whatever-you-want-whenever-you-want delivery service.’ You can still hit ‘em up ‘til 3 a.m. for not bad pizza, totally great sandwiches, and anything you can get in a convenience store, from Funyuns to booze to condoms,” it states in a story headlined “Breaking Down the Five Best Delivery Places in L.A.”

As e-commerce companies or apps like AmazonFresh, Postmates and Instacart compete today on a much larger scale to dominate the grocery delivery business, Pink Dot is something of an Old Faithful that still takes orders by phone or over its website.

Population density figures prominently into the store’s success. When Pink Dot had seven stores in 1999, a manager told the Los Angeles Times that at least 500,000 people lived or worked within a two-mile radius of each one.

Hollywood connections have been good for Pink Dot too. The store has collected its share of TV appearances, such as a cameo in the HBO series “Entourage” among others. Movie producer and Baltimore native John Waters (“Pink Flamingos,” “Polyester”) is a big fan, telling Conde Nast Traveler magazine, “I love the Pink Dot convenience store in West Hollywood.”

The article about “Reasons to Love L.A.” continues, “I mean, come on, Pink Dot will deliver to your hotel a single pack of cigarettes. That’s amazing.” Maybe that’s why owner Sol Yamini says the store is “room service for your home.”

The best story of all comes from former Los Angeles Lakers guard Kobe Bryant and “The Tonight Show” host Jimmy Fallon. Two years ago, they let the world know about a late-night beer run they made to Pink Dot two decades earlier when they apparently were too young to know the store was deliver-only. They relived the experience when Bryant was a Tonight Show guest in 2016, which is well worth watching. in this YouTube video

Not everybody has to say great things about the store, of course. Fast Company Design magazine earlier this year observed that Pink Dot is “a popular (and let’s be honest, sorta seedy) go-to for Angelenos in need of a late-night fix.” The comment recalls a 2009 Los Angeles Business Journal article headline, which states, “Lazy people of L.A., rejoice: Pink Dot is expanding.”

The trail blazer in the home delivery of food, tobacco and beverages has a story that’s every bit as colorful as its Pinky delivery cars. Audacious entrepreneur Bill Toro started the company by buying a liquor store at 8495 W. Sunset Blvd., which was Pink Dot’s only location until 1993.

Unverifiable company legend published by the L.A. Times in 2003 says his idea for a home delivery grocery service – something unheard of in the 1980s – came while watching Jane Jetson of the TV cartoon series “The Jetsons” ordering dinner through her television. The Wikipedia version says Toro’s idea for the store sprang from “numerous complaints he observed about the traffic in Los Angeles.”

The advent of the Internet brought competition from online grocery stores backed by hefty venture capital funding. At first, Pink Dot partnered with one, Kozmo.com, to expand its product line into items such as compact discs and pharmaceuticals. Kozmo.com was unable to survive the dot.com crash of the early 2000s.

Toro and his partners sold Pink Dot in 1999 to PDQuick, an online web delivery service led by executives from Kinko’s, Pizza Hut and Circle K Corp. The L.A. Times says PDQuick was backed by $70 million in venture capital funding, while CNET.com put the amount closer to $20 million. Whatever the amount of funding, the new owner “had great plans to build an Internet-wired nationwide network of home grocery delivery,” according to the Times.

“The dot-commers set up plush headquarters in Camarillo, expanding quickly to more than 30 locations, many in thinly populated suburbs, changed the name of the business to PDQuick.com, scrapped the Bugs in favor of generic Daewoo subcompacts, and opened up branches in Baltimore and in San Francisco.”

By 1999, Toro had taken on investors and expanded the number of locations to either seven or 12 – depending on the source – throughout L.A. and Orange counties. Investors owned 70% of Pink Dot and Toro controlled the rest. Financially, the L.A. Times reported, “Toro projects 1996 sales at $12 million, compared with $6 million in 1995 and $4 million in ‘94.”

PDQuick burned through its start-up funding quickly without accomplishing much. It was on the brink of bankruptcy in 2001 when owners accepted a bid for the Southern California operations from a group of investors led by Sol Yamini, the current majority owner. Yamini restored the Pink Dot name and eventually closed all but the original, flagship store on Sunset Blvd. to refocus efforts there because it was the busiest of all the company’s former locations. 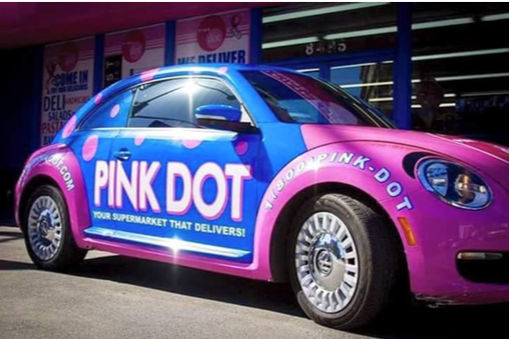 From ‘Bodega to Boutique’

Upgrading inventory as well as its menu of hot and cold foods, the owners say they want to create a more boutique-like presence. They’ve even teamed up with a mixologist to offer on-demand, made-to-order cocktail kits. Their goal: attract more affluent, culturally savvy millennials.

Pink Dot primarily wants to distance itself from a longstanding reputation as a “7-11 that delivers” according to Fast Company Design magazine. The store at 8495 Sunset Blvd., is its only location today.

“The advantage we can offer, as opposed to any of the other delivery services out there, is that we can deliver a more curated experience,” Raphael Farasat of the Truffl Creative Agency told Fast Company Design. “We can’t compete with Amazon or multi-billion dollar companies, but what we can do is make each order special, and make it so you can order everything you need for one night. We’re basically bringing the party experience to your house.”

Until recently, all deliveries were made with Volkswagen Beetles – nicknamed Pinkies – painted in signature cobalt-and-fuschia colors. The fleet is being phased out as part of an overhaul begun last year when Pink Dot turned 30. Most deliveries today are handled by Postmates, which operates a network of couriers that deliver goods for restaurants in L.A. and other major cities in the U.S. 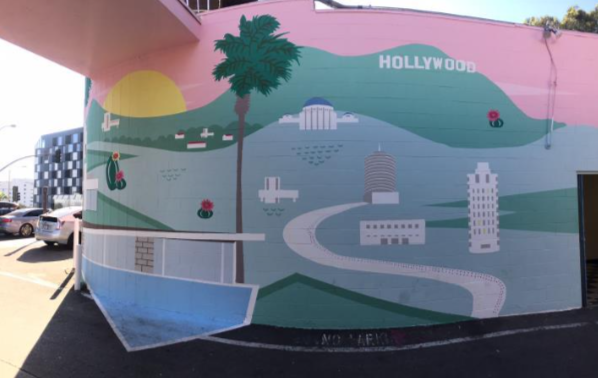 In thirty years I never used Pink Dot. I’m within walking distance of Pavilions. Why would I?

The great thing about Pink Dot is convenience! Everything can be ordered online for delivery. Especially for those times you don’t want to wait in long grocery store lines and wander through overcrowded aisles of product. With Pink Dot you can order food that’s ready to eat – no cooking necessary – and continue to reorder your favorite items with one click. Also, if you’re into entertaining, we have craft cocktail kits that come with everything you need to make a delicious cocktail, all the way down to the tools and garnish. Everything you order gets delivered to your doorstep.… Read more »