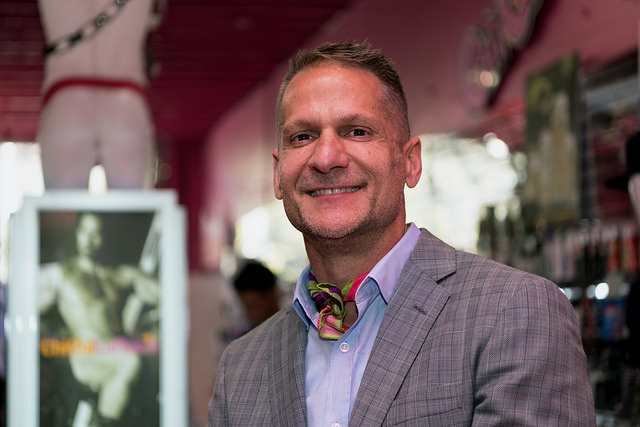 City Councilmember John D’Amico is having a campaign fundraising event on Thursday hosted by Steve Afriat, Jim Arnone and Jeff Seymour, lobbyists who represent development, billboard and other interests before the City Council.

The event will be at 8 a.m. at the London Hotel, 1020 N. San Vicente Blvd. Those attending are asked to donate $500, the maximum allowable from an individual, to D’Amico’s campaign. In an email to WEHOville, D’Amico said the topic is “sustainable and resilient design and development along the Sunset Strip and throughout in West Hollywood.” He said he plans to discuss “balancing residential and business community values through design technology.”

D’Amico announced earlier this year that he would run for re-election in March 2019 for a third term on the City Council. While he previously had pledged to not serve more than two terms, D’Amico in February said that his decision to run for a third term was in response to requests from community members. 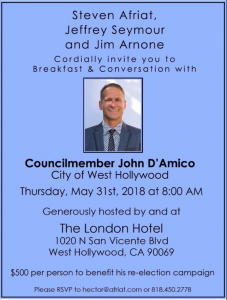 The fact that D’Amico’s event is hosted by three of the city’s most prominent lobbyists may upset some of his supporters who have opposed what they see as too much development in West Hollywood.

D’Amico was first elected to the Council in 2011 on a campaign focused on shaking up the establishment. That establishment included John Heilman, who has been on the City Council since West Hollywood’s incorporation as a city in 1984; John Duran, recently installed as mayor, who was first elected in 2001, and Abby Land and Jeffrey Prang, who have since left the Council.

During his tenure, D’Amico has surprised some of his most avid supporters with shifts in his positions on some issues. Perhaps the biggest surprise was his announcement in January of last year that he was endorsing Heilman and Duran for re-election. Early in his first term, D’Amico’s relationship with Heilman was so acrimonious that the two council members were criticized for refusing to shake one another’s hands. D’Amico also had angered Duran by calling him out at a Council meeting for viewing Grindr, the gay sex hookup app, while sitting on the dais during Council meetings. “For years I have glanced over and seen John trolling on Grindr for men,” D’Amico said. “I can no longer agree to believe that we can give John Duran a pass.”

In endorsing the incumbents, D’Amico called out the turmoil created by the election of Donald Trump as president and what he said was a need for stability.

“I have a history of endorsing outsiders,” D’Amico said, “and yet I have been thoughtful in considering this election, and I decided to endorse John and John.”

“I just see that John Duran’s eloquence and speaking up for people and keeping alive the history of our people and what matters to them is unmatched,” D’Amico said. “John Heilman’s deep history with elected and appointed officials across the city at all levels of government is unparalleled.”

According to the city’s registry of lobbyists, the Afriat Consulting Group’s clients include the developers of the James Hotel and the Arts Club on Sunset Boulevard, which will be a focus of Thursday’s event. Other Afriat clients include five prominent billboard companies.

Seymour’s clients include Faring, the developer of the Robertson Lane hotel project, which comes before the City Council on Monday, as well as developers such as Combined Properties.

Arnone is a lawyer with Latham & Watkins, which also represents Faring, and Mark and Arman Gabaee, also known as Armand Gabay, who are the owners of the Charles Company, developer of the Melrose Triangle.  Armand Gabay recently was arrested on federal bribery charges.

Other announced candidates thus far include Councilmember Lauren Meister and Duke Mason, a member of the city’s Lesbian and Gay Advisory Board and a previous candidate; Timothy Williams, who is head of a production company called Haus of Liontruth; Tom deMille, a local artist who was an unsuccessful candidate in the 2013 election, and Eric Schmidt, who describes himself as a former fitness trainer and who has gotten attention with his promotion of online videos depicting him having sex with other men.  Councilmember Lindsey Horvath has not yet announced whether she will run for re-election.  Meister held a fundraising event earlier this month with hosts listed as Michael Niemeyer of Micky’s, Tom Doherty and Rick Bicanovsky of Cafe D’Etoile, Marta Knittel and Shoshana Joseph of Yogurt Stop, Nicklaus Fox, who performs as Helen Back with Weho Cheer, and Bobby Trendy.

CORRECTION:  An earlier version of this story, based on a list of lobbyists’ clients maintained by the City of West Hollywood, stated that Afriat Consulting represents the developer of AKA West Hollywood and the Charles Company.  Afriat no longer represents those clients, and the story has been updated to correct the error. The story also said that Seymour Consulting represents the Charles Company, however Jeff Seymour has told WEHOville that that no longer is the case.

What this city truly needs is a MORATORIUM on new development not already before the planning commission so that we can take stock, evaluate, and modify the city plan to ensure we’re growing the way we should, and the way we want.

All this haphazard lurching of projects here and projects there is a pandora’s box of problems waiting to be opened.

With Afriat, Seymour and Arnone hosting, they surely won’t also be kicking in $500. each so wonder who the goats will be. Hold the cornflakes! Might be a lonely breakfast. Hopefully Wehoville will be there to report on it? This is getting good.

Have all the fundraisers you want, there is no question (to anyone who cares to think about it) that D’Amico betrayed those who entrusted him to follow through with the agenda he had promised. He was green then of course, a babe in the woods, but it didn’t take long for the inherent corruption of “the system’ to rub off & now he is part & parcel to the dubious behavior he went before a previous city council to admonish them about. He sounded strong & in charge of his convictions. Now we know he was neither. I believe that… Read more »

Do they (Afriat and Seymour) no longer represent the Charles Company because Gabbay was arrested? Isn’t he the guy who is developing the large project at the Melrose triangle and who contributed to some of the councilmembers’ Campaigns? It’s all about money. Deep Throat was right. If we follow the campaign contributions and all the projects approved in West Hollywood, what will we find?

If you lie down with dogs, you get up with fleas.

Guest
Sell out or Sellout?

Excuse me is SELLOUT, one word or two SELL OUT? Maybe we can change that to just SOLD.

Interesting that Mr Seymour & Afriat no longer represent the Charles Company, developer of the Melrose Triangle. Jeff was at the construction kick-off a couple months ago and both have been included on recent construction related emails. Wonder why they jumped ship???

Yes, that may be the more interesting story.

A sinking ship sinks all boats.

Armin Gabbay of the Charles Company was arrested for bribery.

And on the opposite side of the spectrum a few of us are glad to host along a no-cost, everybody welcome, grass roots barbeque to support John’s D’Amico’s re-election on this Labor Day, Monday, September 3rd from 4-7pm at my home. Whether anyone realizes, or likes it or not, Afriat and the others above are invested members of our community who have contributed much. John D’Amico represents all the interests in the city and is open minded enough to give each his ear. John D’Amico ran for office in 2011 and 2015 and won withOUT the endorsement of the West… Read more »

Ethics? Naw, who needs them!