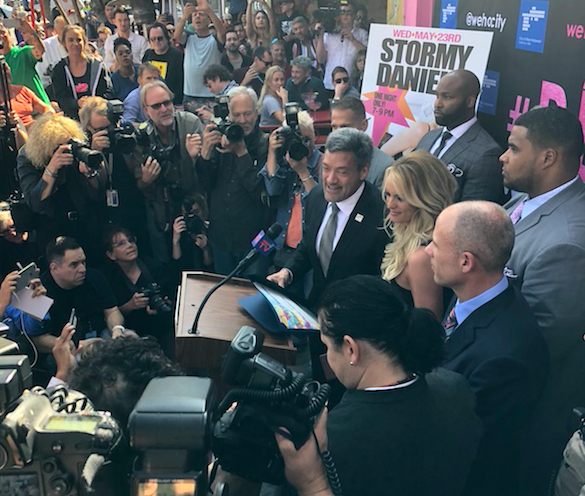 In a speech to the crowd, Duran called out steps President Donald Trump has taken to roll back environmental protections and the rights of women, immigrants and LGBT people.

“Out of all of the chaos of the Trump administration, our own Lady Godiva appeared, on horseback,” Duran said in a reference to Daniels. “And as you know, Lady Godiva rode naked through the streets of England to protest injustice and taxes. We have our own Lady Godiva here in the City of West Hollywood.”

John D’Amico, a city councilmember and the mayor pro tem, presented Daniels with an official key to the city.

Also appearing was Michael Avenatti, the lawyer representing Daniels in her lawsuit contesting a 2016 non-disclosure agreement about her alleged affair with Trump in 2006. The nondisclosure agreement had been negotiated by Michael Cohen, Trump’s lawyer, just before the 2016 U.S. Presidential election.

The people on the sidewalk joked about the nondisclosure agreement, which Daniels alleges is invalid because Trump himself didn’t sign it. They shouted “make sure it’s signed” when Duran presented the proclamation to her.

“Stormy is one of the most intelligent, self-aware, courageous people you will ever come to know in your lifetime, and I am honored and blessed to act as her counsel each and every day,” Avenatti said. “This woman has a degree of fortitude that most of us can only dream about …

Daniels accepted the key from D’Amico, joking: “I’m not sure what the key opens. I hope it’s the wine cellar…

“The City of West Hollywood is a special place very close to my heart,” she said. “As a woman with two wonderful gay dads… I feel especially at home here …” Daniels’  mention of her “dads” was a reference to her friend Keith Munyan and his partner J.D. Barrale.

“The community has a history of standing up to bullies and speaking truth to power, and I am so very, very lucky to be a part of it. I am elated and honored. Thank you.”

Daniels, also known as Stephanie Clifford, is visiting West Hollywood as part of a national tour to promote her #TeamStormy apparel line, which includes t-shirts and hats. From 7 to 9 p.m. today she will be signing autographs and greeting those visiting the Chi Chi La Rue shop, which is at 8861 Santa Monica Blvd. near Larrabee, to buy #TeamStormy products. After that, she is expected to appear at The Abbey on Robertson Boulevard.

Later in the evening, a group of pro-Trump supporters appeared outside Chi Chi La Rue’s, where a long line of people had lined up to meet Daniels.

Looking over Duran’s Facebook indicates the level of hubris he exhibits. A typical lifetime politician (yes, I know it’s not his FT gig, but I’m sure he’s garnered plenty of “favors” over the years) who believes he’s untouchable because he’s survived a few scandals. Yet…people still vote for him. Why? Because he “gets things done”? Seems that’s the same excuse supporters give regarding the guy in the WH.

I — like others — can now report that Councilpersons Horvath and Meister say they were never consulted about the Stormy Daniels debacle. But the question remains: Did they learn of it and say/do nothing to block it? How then were those “Keys to the City” manufactured, stored, and delivered? What did the City Attorney, City Manager, and City Spokesperson know in advance of this Duran stunt, on the heels of the City Council (Brown Act anyone?) meeting/Duran swearing-in at a Sunset Strip nightclub?

Further than your comments is the possibility that this scheme may have been hatched within the confines of Visit West Hollywood , The Chamber of Commerce, City Planning, & John Duran to “revitalize development” of the ultra scruffy Sunset Strip. The development of the Tower Records site with Duran as its #1 Cheerleader was shot down. The lack of a cohesive plan for the strip is obvious to many. Duran needs new cheerleaders and a new pasture to graze in general and after leaving the half baked plan in a ditch that may have created a Historic District on the… Read more »

You can love Stormy Daniels as an accidentally oppositional theatrical figure for our Trumpian times without canonizing her. She had consensual sex with a philandering jerk; she took hush money from a sexist bully. And now we are supposed to praise her as leader of The Opposition? She’s a symptom, not a cure. And WeHo is part of the problem.

I love Stormy!!!!!!! A female making a huge splash by not being afraid to tell her truth. I have never understood the shaming of sex workers or adult film actors. It is sort of mean.

Slut Shaming is a reactionary strategy of “victim blaming” to divert attention away from the actions of oppressors! ✊🏿

As Former Mayor Bloomberg commented with the rise of DJT, “I know a con when I see one”. As many in West Hollywood should recognize that voted for JJD, we’ve been conned. Amazing how these two have such similar characteristics. The only thing missing was a phalanx of flags behind the gleeful “mayor” while his invited guests SD and MA the “attorney” pay homage.
In the next round will JJD be defending MA in his fraud /bankruptcy case or vice versa. More media and courtroom antics to come in the mud bath.

It’s a noble goal and one which can be achieved if we all push for active participation in that most fundamental pillar of democracy–voting! I’ll say it until I’m blue in the face, but to “win” a seat on your aptly-named politburo, one need only garner votes from 10% of registered votes. That statistic is pathetic, and enabled by the off-year election cycle. #VOTEWEHO

I don’t know whether to laugh or cry at the “mayor’s” invocation of Lady Godiva in his grandstanding exploitation of Stormy Daniels and her attorney. I celebrate Ms. Daniels’ position as a chief instigator to the so-called president, and I celebrate her legitimate choice of profession, but for a so-called “mayor” (quotes intended to remind all that the rest of the council sat on their hands and let the coronation occur without a vote) to attempt to redefine himself as the czar of sexual liberation, with his history of referring to an elderly woman’s anatomy with obnoxious and sophomoric crudeness,… Read more »

It’s the Silly Season – the time to be giddy with joie d’ vivre. Remember, “In spring the turtle grows elate and walks on the tips of his toes.” Me too – ‘though it requires m more balance than ever.

The majority of citizens won’t take action because of the form of government. A direct election of a mayor in a November election of an even-numbered year will get the voters out in higher numbers.

Didn’t Councilmembers Horvath and Meister attend? If not, why?