It’s going to be a very “Stormy” evening next Wednesday in West Hollywood with the appearance of Stormy Daniels, aka Stephanie Clifford, at Chi Chi LaRue’s. 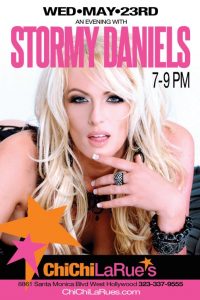 Her TeamStormy t-shirts, which can be purchased online, say #TeamStormy on one side. On the other side the caption is: “Severe Weather Announcement — Stormy 60 Minutes Ahead – -Watch Out For Damage To Your Hair Style Or Presidency.”

Donald Trump’s election has brought lots of attention to West Hollywood, a city whose residents are mostly Democrats. Then-Mayor Lindsey Horvath got national attention in March 2016 when she mailed a letter to the White House saying that Trump was not welcome in West Hollywood. WeHo’s reputation as a Democratic liberal enclave brought Fox News provocateur Tomi Lahren to town twice to walk the streets criticizing West Hollywood’s sanctuary city status.

I appreciate the heads up – Are we expecting any street closures as a result?

Enough. No one cares. Can you report on things that matter?

While a visit to a novelty shop isn’t for everyone, this woman qualifies as a Person of the Year nominee and is one of the most important players in the investigation of the President. Her story leads us to campaign finance violence, threats and corruption. The payment she received forced the White House to release a financial disclosure form this week. And now we know at least $4.4 million flowed through the President’s attorney Michael Cohen including money from a Russian Oligarch. She represents Trump’s problem with women, including the 18 so far who have accused him of molesting them.… Read more »

Trump is losing every day. Cannot put a sentence together without typos or grammatical errors. Cannot even spell his 3rd wife’s name correctly. So much winning.

Whatever you need to sleep at night @curtisbeers. Election happened almost 2 years ago. Let’s focus on making Weho great again!

You’re off topic. This post is not about the election. I answered the question why she matters. The Mueller investigation has resulted in 5 GUILTY pleas and 17 indictments so far. Money was “funneled” from Russia to Stormy Daniels. Follow the facts instead of your self-deception.

Welcome to West Hollywood, we love everyone . alert all news media, west hollywood is the creative city. We Welcome everyone….

Guest
What is Journalism?

Wehoville=TMZ in the race for eyeballs.
So much for responsible journalism.

That’s fine. But she better bring her lawyer, that’s who the boys really want to see.

Her lawyer is Michael Avernatti