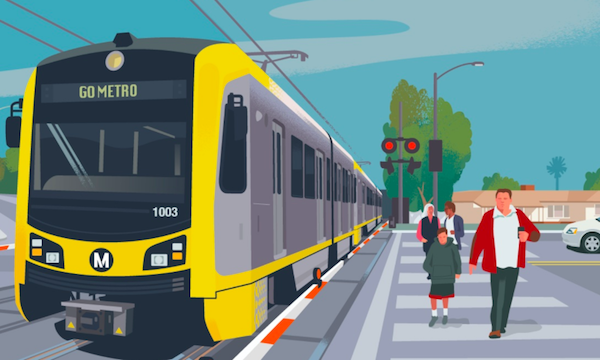 Last Monday night, a City Council majority voted to adopt a resolution in support of accelerating the Northern Extension of the Metro Crenshaw/LAX line. The resolution sounds innocuous enough – but the devil is in the details.

Here are the details:

1. This vote will cost us $70 to $550 million in addition to the 3% match required by Metro, which is $42 to $66 million. The amounts depend on the final alignment (route) of the Northern Extension — e.g., La Brea, Fairfax, La Cienega or San Vicente – as well as the project delivery scope and schedule.

2. Regardless of the route of the Northern Extension, the city is committing to expedited environmental review and permitting. This could mean less time for public review and community input.

While I’m 100% in favor of public transportation and fully know the benefits (as I learned growing up in Brooklyn New York!), I think it’s irresponsible to commit city efforts, staff, and your money to a project where we don’t know the route of the extension.

Shouldn’t a $616 million commitment have a discussion and not just a consent vote on a meeting agenda?

I pulled the item from the consent calendar to initiate dialogue. For me, placing this item on consent calendar raises red flags about transparency and public process, particularly considering the significant amount of money involved in this decision. The City Council is responsible for good stewardship of public funds — and the public deserves to be provided the facts — the pros as well as the cons — and to be part of that discussion.

Per Monday night’s staff report, sources of revenue could include a local sales tax, bonds, private investment, or value capture tools such as an Enhanced Infrastructure Financing District (EIFD), or additional state or federal funds.

Why are we ignoring the local tax poll results?

The staff report did not mention that in the fall of 2016 (just before the Measure M vote) the City of West Hollywood authorized $40,000 for a poll regarding a potential local tax initiative. FM3, a leading public policy polling company with 37 years of experience, was contracted to facilitate the poll.

A random sample of West Hollywood likely voters were asked, “Regardless of how you will vote on a local tax initiative, please tell us how important each feature or provision is to you personally?”

Results indicated that nine  other features/provisions were of higher importance to these West Hollywood voters than providing matching funds to attempt to accelerate the extension of the light-rail line through West Hollywood — items such as expanding the city’s efforts to address homelessness, ensuring safe and clean public areas, increasing affordable housing, and assisting in earthquake retrofitting. 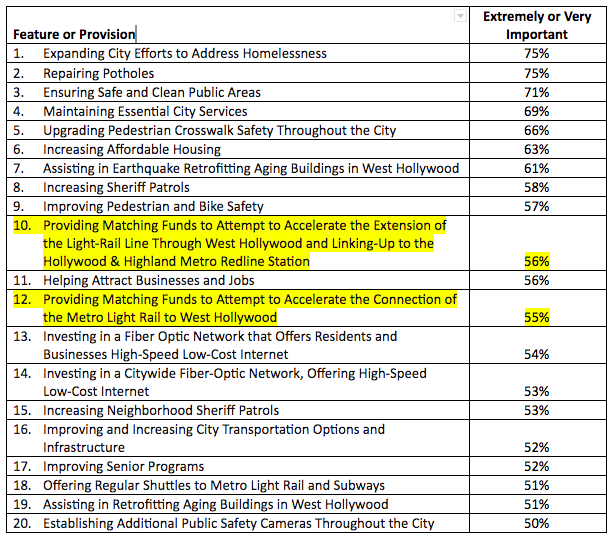 No one is disputing the fact that West Hollywood voters supported Measure M, as did a unanimous Council. And since 2015, the city has spent nearly $1.2 million on building support for the Northern Extension and trying to convince Metro to accelerate the build-out of this line.

The issue at hand is, do the people of West Hollywood want the city to commit to spending an additional $550 million to accelerate the project, and continue to put large sums of money into this effort, without knowing the exact final route of the expansion, and if that route best serves all businesses and residents of West Hollywood?

Subway ridership will take cars off the road, thus freeing the streets of pedestrian obstacles, and reducing the demands on parking in West Hollywood all at once. Businesses within walking distance of a stop will most likely see increases in revenue and in their property values. Residents will have cheaper options for work, play, and travel, but yes it will cost something up front, and forever more – that’s why the sooner those increased revenues and property values accrue interest, the better. The city has the money now, and can find more – questions and investigation are great, but when… Read more »

It’s hard to believe that public safety cameras got as high as 50%.

I am hardly torn by this project. I support rail, but it’s not a fact of life in the West.
I wonder how long it will take for upcoming generations to become used to it.

What is the environmental impact?

A quick easy and low cost to give WeHo residents quick access to the MetroRail System.

The DASH mini-bus used to offer an inexpensive (25¢) fast access through WeHo to Hollywood & Highland.

Our line through WeHo was cancelled. I’m not sure why, but it was and could be a very quick & easy way to get rail transit to WeHo at a nominal cost relative to all ideas thrown out.

This is a good idea, but the City already has a shuttle to H&H, which only operates during rush hour in the morning and evening. I wonder how many people use it.

True enough, but what about a line down La Cienega/Wilshire when that station opens?

Shuttles running up and down LaCienega, Fairfax, and LaBrea could certainly expedite access to rail once those stations open.

Many interesting points raised in the article, and in (some of) the commentary (that which is not anonymous). The LA region cannot continue to expand without mass transit, it’s simple math. I completely agree that we should not commit funds in the absence a concrete plan. What is needed, and what I suggest Ms. Meister do with her zeal on this topic, is leadership on what WILL happen, and what CAN happen. I applaud the analysis, now let’s move forward and make WeHo’s voice heard in the planning! My guess is that WeHo can exert considerable pressure on the final… Read more »

Thank you for such a comprehensive explanation of the issue at hand and I, for one, agree with you about getting more information before green lighting what could be a 500 million differential. I am sorry your support of converting motels into homeless shelters didn’t receive more support, as they seem to work well elsewhere in L.A. I volunteered at a bridge shelter in North Hollywood that had been a motel and it seemed to be working well. It’s hard to believe that property values take that much precedence and we should think back to Los Angeles during the Great… Read more »

Surprisingly, I agree with Ms Meister on this one. Most people in WeHo would love better public transit/rail transit.
The cost per mile of any rail project is so high, it would never be feasible through WeHo, given the current path already built. The streets of WeHo, we all know, are unlike any normal grid pattern. Likewise, WeHo is a narrow east/West city, so any usable transit would have to go through the whole city, east/West to give enough residents access to use.
Wasting any more City money is flushing good after good resources down the toilet.

Kudos to Meister for putting the city’s financial well-being first.

To have the city promise to pay an astronomical amount for a route that might run up LaBrea doesn’t make sense.

Dear Ms Meister I want to participate in the City’s survey of priorities for West Hollywood by the FM3 Group; a leading public policy polling company with 37 years of experience. Unfortunately they did not ask MY OPINION or anyone else I know for that matter. Had they asked me I would have said that expanding the City’s efforts to address homelessness is not a priority because we now have a County wide tax, the first of it’s kind, to provide help to the homeless. I would have said that West Hollywood is drowning in an endless sea of luxury… Read more »

Warren – I agree with you, WeHo is drowning in traffic. But Measure M is ALSO a county wide tax that was sold to voters that it would generate $120 Billion.

I’m glad at least one councilperson is asking some very basic transparency questions about a huge amount of money for a city of 35,000.

Those other three rubber stampers approved a ridiculous amount of money without even asking about the acceleration timetable – is $550 million buying 5 years faster? 10 years? 20 years? I’d like to know that answer but there’s nothing in the staff report about timetables.

Nobody can deny the ever worsening WeHo daily traffic nightmare.
In general, even if some won’t or can’t take any existing or upcoming rail, the good of the project benefits everyone. With the plan to go through Century City, the most number of daily commuters can take the metro, thus eliminating many individual cars, and reduce the number of Street buses needed at rush hour, to significantly reduce the entire concestion, much of which is dumped into WeHo via SMB.

Before the council approve this item, they need to repair the dangerous sidewalks in West Hollywood.

Thank you for bringing this ridiculously scary info to our attention Ms. Meister. Huge waste of funds at this total stab in the dark. Now how can we reverse course STAT????

Finally a voice of reason. Thank you, Lauren.