Two West Hollywood City Council members who are openly HIV positive have asked that the city’s Lesbian and Gay Advisory Board invite representatives from Grindr and other gay sex apps to explain what they are doing to protect information about their users’ HIV status.

Grindr, which is headquartered in West Hollywood, bills itself as the world’s most popular gay sex app, claiming 3.6 million daily users worldwide. It has come under attack since a story published today on Buzzfeed revealed that Grindr has been making available to outside contractors information such as the HIV status of its users. That information also includes email and telephone numbers, ethnicity, sexuality and relationship status, as well as GPS data, which can used to trace a user’s location. The contractors are Apptimize and Localytics, companies that work to optimize the performance of apps such as Grindr.

Buzzfeed’s report was based on an analysis by Antoine Pultier, a researcher at the Norwegian nonprofit SINTEF.
It quickly sparked criticism across the gay media world. U.S. Ed Markey (D-Mass) also criticized Grindr. “Privacy isn’t just about credit card numbers and passwords. Sharing sensitive information like this can put LGBT Americans at risk,” he said in a tweet @edmarkey.

“Grindr’s action with its clients’ data appears to be unprecedented and is a serious violation of laws protecting the confidentiality of clients’ personal information, particularly sensitive health information that may result in stigma and discrimination targeting those individuals,” Weinstein said in a statement released to the press. “We demand that Grindr immediately cease and desist this reckless practice and do whatever it can to retrieve, shut down or halt the further sharing of this personal and confidential information.” 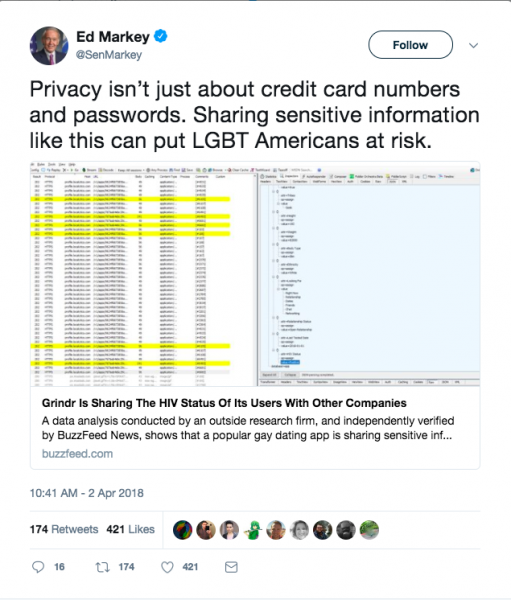 Axios, the online news site, reported this afternoon that Grindr has responded to the criticism and has stopped sharing users’ HIV status with third-party vendors. Bryce Case, Grindr’s security chief, said Grindr’s data sharing was misunderstood. Case said the most sensitive information was encrypted and that it was not shared with advertisers.

Councilmember D’Amico noted that Grindr is an app that is used internationally and that making information about its gay users available in some countries may put them at risk. Councilmember Duran agreed, saying “I’m starting to believe that many of the young people who work for the company don’t understand what we actually fought for in blood,” a reference to battles waged in the past to provide health care to HIV positive people and fight stigma against them.

Tonight’s comments by D’Amico and Duran are the first time the City Council has criticized the WeHo-based company, despite criticism raised in the past about Grindr’s facilitation of the sale of methamphetamine to gay men in West Hollywood and worldwide and its failure to take steps to prevent officials of homophobic nations from using the site to identify and punish gay men.

Joel Simkhai, a gay Los Angeles resident, was the co-founder and majority owner of Grindr until earlier this year, when he sold his final stake in the company to the Kunlun Group, a Chinese online game developer. The sale valued the company at $245 million. Simkhai was replaced by Yahui Zhou, chairman of the board of Grindr, was named interim CEO. Grindr’s vice-chairman, Wei Zhou, was named executive vice-chairman and CFO. The company until recently had about 100 employees at its headquarters at the Pacific Design Center Red Building in West Hollywood, but is said to have recently laid off about 30 staff members. WEHOville has been unable to get a response from Grindr confirming the layoffs.

Click here to subscribe and receive an email every morning showing the previous day’s news on WEHOville. You’ll be joining the great list of supporters of WEHOville and our effort to provide you with the news you want and need.

Assume everyone is HIV positive and act accordingly if have sex with strangers. We don’t need City Council getting involved with such matters when there are so many more matters that need attention. Sometimes it appears that people try to make issues newsworthy for their own titillation.

Cute comment but this is a legitimate concern. Homo & AIDS phobia are still rife in the world and in some places are issues of life and death.

Steve, What’s the deal with all the mean-spirted comments about me? I have never met you and you don’t know anything about me. I would like to invite you to sit and talk with me. My Partner and I can host or we can meet at a coffee shop. I would like you to have the opportunity to “get off your chest” whatever resentments you have toward me. I also invite you to read my Campaign Platform on my FB Page: Eric Jon Schmidt for WeHo. I’m not going anywhere. I will be here for the duration including however many… Read more »

Are you referring to this FB group?

If so, I don’t see any info about a “campaign platform.” Only a banner graphic, and no other activity.

no. Eric Jon Schmidt for WeHo. Take 2 minutes to read my platform

Although I assume that everything on apps, social media etc. is for public consumption, this is a flagrant breach of trust, causing potential harm to grindr users.
@steve….Really? People could be in danger, particularly when traveling to other countries and you find appropriate comment is to trash talk? C’mon. Be a better man than that.