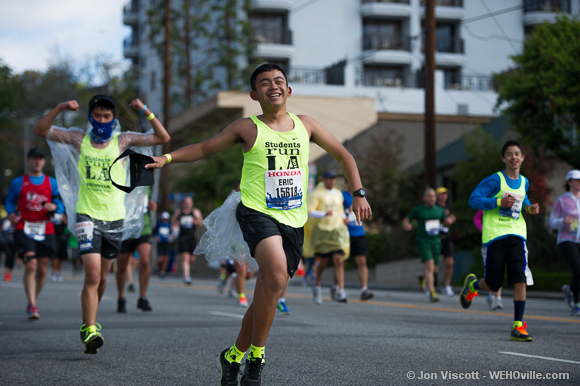 As of 2:30 p.m. p.m., firefighters had treated 72 people for medical problems during the race. Of those, 10 people were hospitalized, four of them with immediate, life-threatening medical issues.

In West Hollywood, an MTA bus on a marathon-caused detour scraped two parked cars on a narrow side street. Nobody was hurt in the mishap, on Cynthia Avenue at Palm Drive, a spectator said.

All but four miles of the marathon route and cross streets had been reopened to traffic by 2:30 p.m., according to authorities. East of Brentwood, stragglers were reportedly using traffic lights and sidewalks to walk to the Santa Monica finish line.

Police wanted to remind people that drones were not permitted over the marathon route.

I was unable to get to work on Sunday due to the Marathon. There were absolutely no warnings or detour signs set up until the morning of. In a situation like this, does the city owe us anything for physical damage to our property and lost wages? Or are we all supposed to crack a smile and hand over everything we’ve got to the city of LA? The obliviousness of LA city-workers is disgusting, we can’t all drop everything to go run a race, some of us have lives.

Did you expect someone to knock on your door to inform you? Wahhhh.