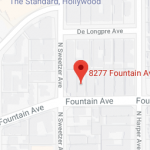 The three damaged apartments were evacuated, Stafford said. No injuries were reported.

Firefighters on the scene cleared debris from the area, and a scaffolding company removed the “improperly” secured tarp and wood planks, according to an LACFD public information officer, who also reported that firefighters applied a plastic cover to the roof of the apartment building.

Fountain Avenue, shut down in both directions between Sweetzer and Harper avenues, was re-opened a little before 9:25 a.m., the sheriff’s West Hollywood station reported.

I think there were three helicopters that began circling around 4.20 – 4.400am, if I remember correctly. I happened to wake early, but MAN, those helicopters are making my life fairly miserable. Yes, I’ve complained – steadily. I don’t see any changes.