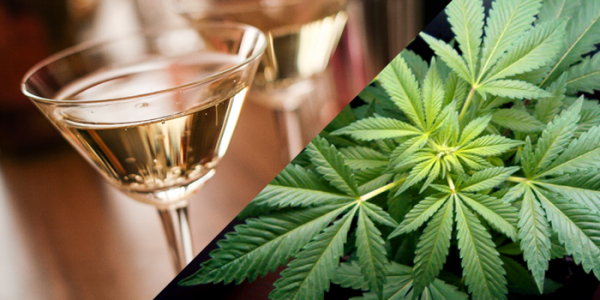 West Hollywood is known as the “Creative City.” But could that slogan give way to “Smashed ‘n Stoned”?

That might depend on whether the California legislature passes (and the governor signs) Senate Bill 905, would make WeHo one of six cities in the state that can allow bars to pour alcohol until 4 a.m. And on whether the West Hollywood City Council decides to actually extend those hours.

The people of California already have made it easy to get stoned with the passage of Proposition 64, which legalizes the sale of recreational marijuana. You’ve probably noticed that the lines outside the pot shops last month were longer than those outside the Troubadour and the Rainbow Room. The city soon will begin accepting and reviewing applications for up to eight recreational and eight medical marijuana shops, which when approved are likely to mean shorter lines but more weed.

West Hollywood already is pretty well liquored up. WeHo by the Numbers reports that West Hollywood had 234 active alcohol retail licenses in in November 2016. “Of those, 197 were ‘on-sale’ licenses typically issued to restaurants and bars. The other 37 were “off-sale” licenses for stores that sell alcohol.”

On a per capita basis, that is 61 liquor licenses for every 10,000 residents, roughly 50% more than Beverly Hills and twice that of Santa Monica and Culver City.

Of course West Hollywood is a city that makes its living largely off of tourism, so many of our drinkers come from out of town to party. There also is an argument that keeping bars open and pouring until 4 a.m. will mean more alcohol sales but not necessarily more drunken behavior if bartenders are vigilant in not serving obvious drunks.

State Sen. Scott Wiener (D-San Francisco), who introduced SB 905, argues that the existing liquor law, which sets last call at 2 a.m. needs to be updated to fit with the current culture. Wiener notes the current law was passed more than 80 years ago, after the 21st Amendment ended prohibition in the 1930s. He also has pointed out that cities such as Atlanta, Chicago, New Orleans and New York already allow alcohol sales after 2 a.m. (In Miami Beach the cut off is 5 a.m.)

So the questions are:

1) Should the legislature pass and Gov. Brown sign Senate Bill 905?

2) And if the bill passes, should the West Hollywood City Council actually approve liquor sales until 4 a.m. (The Council, in a four-to-one vote with Councilmember Lauren Meister opposed, voiced its support for the 4 a.m. limit in April of last year).

Why or why not?

Please share your thoughts in the comments below (and remember, we’re looking for your opinions, not criticism of other commenters).

This is such a stupid conversation. Why would anyone, other than a bar owner even come up with this idea? It does nothing to improve the Community or it’s image. When we have crosswalks that are still not lit up and a homeless crisis, someone came up with the idea to keep the bars open later? WTF? If you want 24 hour bars, move to New Orleans. I love the French Quarter, but I would not want to live there. This is truly the most stupid idea West Hollywood has ever brought up for discussion. If bars are open in… Read more »

Yes to 4AM, settle for 3AM. OR, similar to DC, bars stay open later on Friday and Saturday.

I’m very progressive, but cannot help but be cautious about this. I know some people argue that there will be less drunk drivers on the road. That might be the case, I’m not so sure. I mean, people can stay out and eat, or go to a non-alcohol serving after hours place, already. How does giving them the option to drink until 4 AM discipline them to sober up? Because they won’t binge drink just prior to 2 AM? I also do not think we can compare West Hollywood to places like NYC, DC or Vegas. Those are not “car… Read more »

I think people forget that people actually LIVE in West Hollywood. The 2am limit is good. There is no good reason to need another drink until 4am. If you do, take it back to YOUR home. Let us get at least 5 hours of sleep. Thank you.

Lack of proper sleep is the biggest detriment to people’s health. No matter how long you work out at the gym and eat the right foods……booze, dope and lack of sleep cancels it out. Throwing your $$$$ and health away. Your body is designed as a magnificent machine…if you don’t take care of the maintenance even Ferraris seize up.

Manny – NYC bars closed at 4 but back in the day when the Meatpacking District was just that, you could go to others bars (probably “protected” by the Mafia) and drink till, basically, whenever. When I too moved to LA, i was taken aback by the rather uncivilized 2 am curfew. And, don’t forget that a (long closed) famous (in the 80s) disco club on Highland (PROBE) stopped serving at 2 but remained open though the night with the bar re-opened at 6 am. Even now, bars in WeHo stop serving at 2 but remain open till 4. I… Read more »

It’s absolutely time to allow bars to serve until 4am. Bars should have the option of staying open as late as they feel they have customers coming in. While I doubt every bar would extend their hours given the opportunity, they should be allowed to if they want to.

It’s embarrassing having people come here from all over the world, only to find out about our draconian alcohol laws. I can’t imagine that anyone who drives after closing at 2am would drive at 4am, with Uber and Lyft so easily available. I say YES to 4am!

When I moved here from NYC, I found the 1:30AM “Last call for alcohol” very refreshing and civilized. If you’re out at 4AM in NYC (and in my 20s I was) you’ll see a lot of commotion and drunk people, something you don’t see, in that way, here.

Serving alcohol until 4AM does nothing good for the world. It only makes bar owners more money and the walk of shame more tragic.

4 a.m. is not safe for the area as more people will be drunk by then, crashing into the early morning people trying to get to work. It’s already bad enough people are drunk, high, texting and distracted when they drive. I think only 2:30 a.m or at the most 3 a.m. is a compromise. So that bar people can get home and the city can quiet down for those who need to sleep. We have too many people crammed into such a small city. People have professional jobs. They don’t need late night people screaming in the alleys, hallways,… Read more »

Glad to see Manny @ PJ are acquainted with the quality of life. No good will come out of bar service until 4:00am nor will smokin’ dope…medical or otherwise and folks engaging in irresponsible behavior. And as for Uber & Lyft picking up the drunks and the doped out… there’s a down side to that as well. Two more hours of bar revenue? Good luck folks….try growing up, being responsible and having a life.!

The death penalty doesn’t deter crime, so a reverse thinking is, why would extended hours increase people’s bad behavior? I don’t really think that certain factors – like longer hours – would change the way people act. Foolish is as foolish does – same with stupid – and the same with smart and responsible.

WeHo offers good public transportation, which should obviously be extended once need is increased. I too, walk, especially if I were to do any drinking.

Thank you, Mr Scott, for the links to our state reps.

I think this is the third time I’ve weighed in on this subject on this site, and I’ll repeat: THIS IS LONG OVERDUE! These other cities in the country are the test cases going back many years, not to mention cities around the world. It’s the Uber/Lyft era and some other cities with a later last call than West Hollywood have fewer late night transit options than we do. So any comment about drunk driving escalating critically are out here. It’s time to give this a try, the compromise could be Friday and Sat night to start, rather than every… Read more »

Absolutely! As a first class city it’s time to join NYC, Washington DC and Atlanta by extending closing time. This would put West Hollywood on par with gay destinations like Puerto Vallarta & Montreal who both serve until 4:00. We’re not Utah and people work various hours. Most I know don’t even go out until Midnight. (Even Mike Pence’s Indiana goes until 3:00) Currently the Abbey has last call by 1:30 and starts pushing people out the door so they can be vacant with the gates closed at 2:00! It currently feels like bars close at 1:30. The Trolley, Uber… Read more »