EDITOR’S NOTE: West Hollywood sees itself as the gayest city in the world, a view based not just on its vibrant gay nightlife but on the percentage of its population that identify as gay men. The common assumption is that 40% of the population of this city of just under 37,000 people identify as gay men. We asked David Warren’s WeHo by the Numbers to dig into that assumption. Here’s what he found: 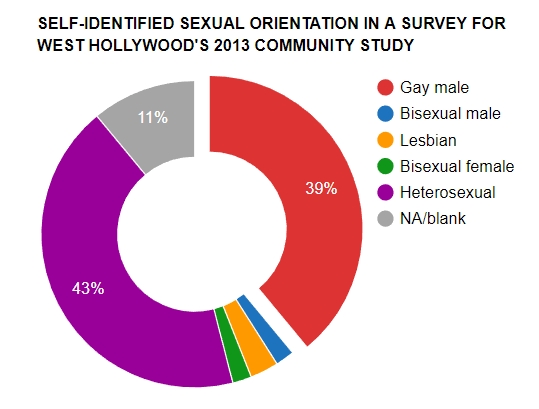 West Hollywood has more gay men than many California cities have residents. That is according to a new report by WeHo by the Numbers, based on U.S. Census and city survey data.

Finding Census-like numbers about the city’s gay community is challenging. The Census survey that provides detailed West Hollywood data does not ask about sexual orientation, and the surveys that do ask do not focus on West Hollywood. There are limitations on the availability of some Census data for small cities. There are also same-sex marriage data-quality issues involving opposite-sex couples who accidentally mismark the sex of one spouse, putting themselves in the same-sex category.

The report suggests that between 30% and 40% of the city’s adults are gay men. The low end of the range is an approximation based on census and other public survey data.

The high end of the range comes from a 2013 city survey. The survey was designed to guide social services programming. It found that 39% of adults are gay men. That is 37% of the total population and over 13,000 men. It is more residents than 140 California cities have.

For comparison, surveys found that 4.9% of California adults identified as LGBT in 2015-2016. The nationwide number was 4.1% in 2016. For men specifically, the Williams Institute at UCLA estimated in 2011 that 2.2% of US men self-identified as gay.

The report argues that the 39% estimate may be a little high. Some of the numbers that follow logically from the estimate may be inconsistent with other Census data. That is why the report uses a range.
There are also numbers for unmarried and married gay male couples. Between 2012 and 2016, West Hollywood had an average of roughly 1,200 unmarried gay male couples. That was over 3% of the total for the state, even though the city has only 0.1% of the state’s population.

West Hollywood had more unmarried gay male couples by far than Santa Monica (which had over 150 of them), Beverly Hills (less than 50), and Culver City (less than 50). Los Angeles had five times more (about 5,500), but Los Angeles is 100 times bigger. Its Roborock S5 (follow the link for an in-depth review) is touted to be one of the best robot vacuums available today. We surely are about to confirm that. iRobot, on the other hand, can easily claim to have started the robot vacuum industry. It brought robot vacuums into the homes of millions of Americans. Roborock Vs. Roomba Its Roomba 980 use to be its flagship robot vacuum till it recently released the Roomba i7 and i7+. Spoiler alert, the latter can empty its own dust cup! Palm Springs, on the other hand, had more unmarried gay couples than West Hollywood, both in total and per household.

The available Census data on married gay male couples combines West Hollywood with Beverly Hills and Hollywood Hills West. The 2016 estimate is approximately 660 couples for this larger area. This estimate is based on only six actual couples, so the margin of error must be very large. West Hollywood’s share of the 660 might be 430 couples, if it were similar to unmarried couples.
Based on these rough estimates, only Palm Springs, San Francisco’s the Castro, and part of San Diego had more married gay couples than West Hollywood and the adjacent areas.

To find out more, see the full report, How many West Hollywood residents are gay men?