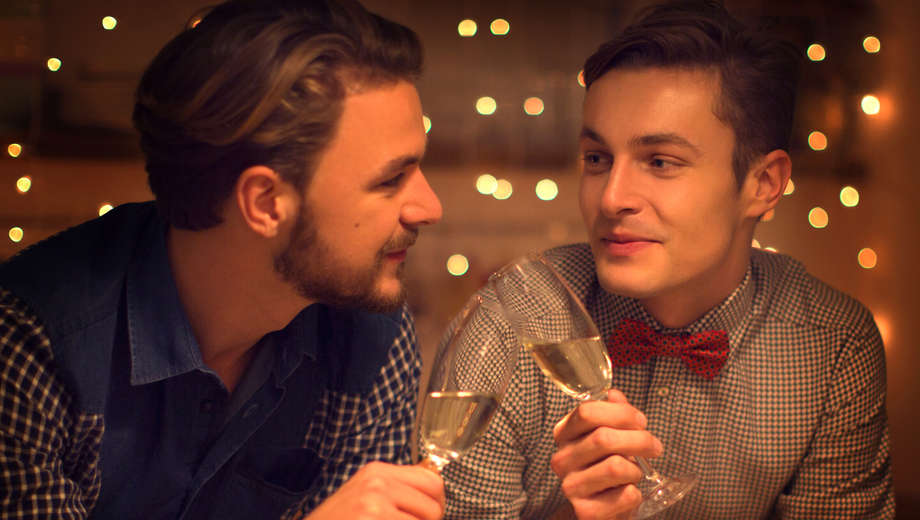 I was cruising the Internet (let me rephrase that)…I was researching LGBTQ events for story ideas for a column I write on queer culture in L.A. for a Palm Springs-based publication, when I stumbled across an invitation to attend “Quick Dates: A Gay Men’s Singles Sunday Funday Soiree,” sponsored by Ivy Pride Alliance and Three Day Rule.

I did not click the ad right away. Like many guys might, I shuddered at the thought of attending a speed dating event and pushed it way, way outside my awareness. Speed dating? Isn’t that, like, for losers?

Remember the episode of “Sex and the City” where Miranda explores the speed dating universe? Proud of her intelligence and accomplishments, when she tells guys she’s a lawyer, they tune her out, glancing at other women in the room. But when she lies and tells them she’s a “stewardess,” (complete with a silky corporate scarf tied round her little neck) they perk up and all want to sleep with her.

But then I reasoned, “Well, I am single. I do want to be in a relationship. I haven’t tried speed dating before. It must exist for a reason. My therapist is always telling me it’s about taking risks, so, okay, let’s do it.”

If it’s a bust, I told myself, at least I’ll get an article out of it. (Now you know how writers think. And, yes, it is dawning on me that such an approach could in fact hinder romantic relationship-building success.)

But you know what? Quick Dates was not a bust, far from it. The event was professionally run, very low-key and attended by maybe 40 eligible bachelors.

And, now, you, Dear Reader, as Miss Manners used to affectionately write, get to find out all about it. Live vicariously through me. I dare you.

Before I could purchase my reasonably priced ticket (only $20), registering for the speed dating event required I answer two questions that, frankly, put me off. I almost didn’t go through with it.

First: On a scale from one to five, with one being “very” and five being “not at all,” how masculine are you?

Seriously? That is the question? I was suddenly brought back to junior high and high school, facing the absolute dread of whether I would be picked for the football team, or the soccer team, or the basketball team…or, frankly, any team. How masculine am I?

I decided to play it safe. I could pick more than one number to create a range of self-identified “masculinity.” I selected numbers two and three – not the Marlboro Man or the Brawny paper towel lumberjack, but, well…a guy. Your basic dude.

Yet I felt hemmed in by this bald self-ranking and resented this being the question being asked. I thought we were beyond the binary in our Brave New World of gender fluidity; no more male/female, masculine/feminine, outie/innie.

David Cruz, an LGBTQ dating coach and matchmaker with Three Day Rule, who also runs his own company called Finding Cupid, was onsite “to give support and answer questions for all the gay men attending.”

I asked him why these two particular questions. “Gay masculinity is such a hot topic these days,” Cruz replied, “because of what we’re calling it, how we’re using it.”

“But at the end of the day these are really important questions that people are asking of their partners or of matchmakers when they’re trying to seek out a partner.”

Second: On a scale from one to five, how masculine do you want your date to be?

Uh-oh. This was confrontational, too. How open-minded am I? How do I really feel?

I decided to be honest. I kind of wanted a one (“very masculine”). Not a must, or a deal breaker, but that, as I suspect many respondents felt, was my honest answer. I added in two and three to widen the range, figuring many guys wouldn’t rank themselves a five on the masculinity scale anyway. It’s a lot of pressure, even if no one else is going to know. 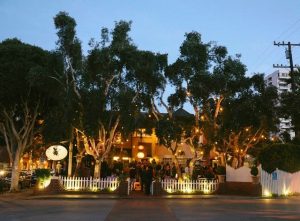 The Mike Nichols’ film notwithstanding, The Birdcage is a new-ish gay bar in Santa Monica, not exactly a part of the city known for its gay nightlife (though Roosterfish will be back soon on nearby Abbot Kinney in Venice). It’s right on Main Street at Ocean Park and reminds me of places in Key West — clapboard siding, big glass windows, a wooden staircase leading up from the sidewalk, tropical-like foliage and a casual vibe.

Inside there is a hodge-podge of tropical-themed furniture (sofas with palm frond and Birds of Paradise printed upholstery), glass coffee tables, wood-paneled walls and shelves with books on them for a homey feel, like you’re in somebody’s living room. It’s “The Golden Girls” meets low-end WASP-y Connecticut. Rue McLanahan would have felt right at home.

“You’ll receive instructions on your phone,” Bella Barkow, the 20-something gal behind the registration desk, explained to me. “Text messages will tell you where to go and what to do.”

That’s novel, I thought. Somehow I expected tiny pieces of colored paper and a map.

However, I wasn’t getting any texts telling me to do anything.

“Oh, shoot. I registered you under the wrong Michael,” said Barkow. As she said the guy’s name, the guy behind me uttered, “That’s me. I think I’ve been getting his texts.”

I turned around to find a handsome, well-built twenty-something with dark hair, smooth skin and two rows of very straight, white teeth. We grinned at each other and, uh…I felt a spark.

Bottomless Mimosas Put Us at Ease

Registration errors corrected, this other Michael and I moved into the main room, which had a parquet floor dance area underneath a modest-sized disco ball and a small bar.

All-you-can-drink OJ and champagne was $15. Michael and I both took the bartender up on the offer and began chatting. I learned he is from Diamond Bar, went to Stanford and UCSF, and is now a physician doing his residency at UCLA. (If anyone ever tells you the idea of dating a doctor isn’t hot, don’t believe them.)

“Cool,” I thought, “this guy’s nice, attractive and, I think, interested.” “How wild would it be if I met a guy at a speed dating event the Old-Fashioned Way?”

I noticed that there were now more than three dozen men at the venue. There was a wide range of types: 20s to 50s, white, Latin, Middle Eastern and mixed-race guys, thin to beefy. What everyone had in common, in my opinion, was that we were all decent-looking, maybe not Ryan Gosling, but definitely not Quasimodo. Just guys. Every one of them I could see being any man’s version of what my friend Jeff and I call “boyfriend handsome,” indicating that one’s expectations for attraction in a relationship are not, and probably shouldn’t be, the same as for an interlude of emotionally vacant hot sex with a hook-up. 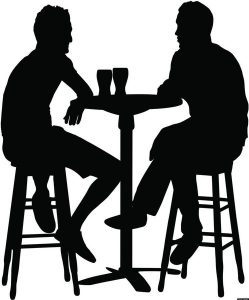 Gents, Go to Your Tables

After a brief introduction and welcome from Cruz, everyone got his first text message.

Mine read: “Please move to table 7 to meet Rafi.”

Throughout the Birdcage, in the main room and outside on the sizeable patio, were 15 tables, arranged for pairs of men to get to know each other. We had seven minutes per potential match.

I met a muscular oncologist from Lebanon who grew up in New Zealand, a ginger-haired newbie to L.A. wearing a brightly-colored blazer perfect for a Mid-Century Modern cocktail party, a soft-spoken and slight Japanese 20-something hoping for a Green Card, a bald Latino filmmaker getting his PhD in economics and a French-Canadian from Montreal living in downtown L.A.

What struck me were two things: 1) How polite everyone was, and 2) How smoothly the entire process flowed. I wasn’t meeting the man of my dreams, but I was having a decent time. Meeting nice guys in a low-key environment did much to restore my faith in humanity (dating can be brutal, after all) and it was a relief to be spared any embarrassment from mistakes in the logistics.

In short, I was encouraged and impressed.

Before We Say Goodbye

After meeting 12 men over two hours, including a brief intermission for bathroom breaks and more mimosas, Cruz and his associates raffled off a complimentary dating coach package. That’s what Cruz does, coach people on how to date successfully. (He’s now married so perhaps he knows of what he speaks.)

“Tomorrow, guys,” Cruz announced, “you’ll all get an email with your results.” “You can follow-up with your matches from there.”

Yes, the next day we would all find out if anyone we had met wanted to date us, or be “just friends.” By omission we would also understand if we had no matches.

I noticed the handsome UCLA physician again. He and I hadn’t been paired during the event for a conversation so I took a chance. “I enjoyed meeting you, and you have a great smile,” I said. “Can I get your number?”

He flashed his impressive pearly whites at me, seeming genuinely flattered. He gave me his number and I left, feeling pretty good. As I returned to my car, I didn’t know whether I would get any matches the next day, but I did know I would ask the handsome doctor out in a few days.

I smiled to myself. It had happened. I went to a speed dating event, took that risk, met a bunch of nice guys…and the person I was most attracted to was the guy I might never have met if our phone numbers hadn’t been mixed up at registration.

The next day, as promised, I got that email. It told me I had six friend matches, but no one wanted to date me.

I was only mildly disappointed. I felt a bit of a connection with the Latino PhD candidate, but he obviously didn’t feel the same. Neither did the muscular oncologist. Oh, well.

But I had the other doctor’s number in my phone. And I used it. A week later we had dinner and drinks at Tortilla Republic and had a great four-hour date with stimulating conversation and mouth-to-mouth contact.

While we didn’t go out again, and that bummed me out for a day or two, I realized it’s okay. I put myself out there. I know we all hear that a lot, but it’s true. Just by being willing to do new behaviors, like the speed dating thing, or putting up an online profile, my thinking shifted a little bit. And how I viewed myself grew ever so slightly.

A few weeks later I met someone on OKCupid. While it’s too early to know where it’s going, I firmly believe following through on the Quick Dates event at the Birdcage helped me be more confident and relaxed with this new guy.

Three Day Rule holds gay speed dating events throughout L.A. on a regular basis. They even have one coming up in February, just before Valentine’s Day, also at the Birdcage.

If you’re like me, open to meeting new people, I can recommend it.