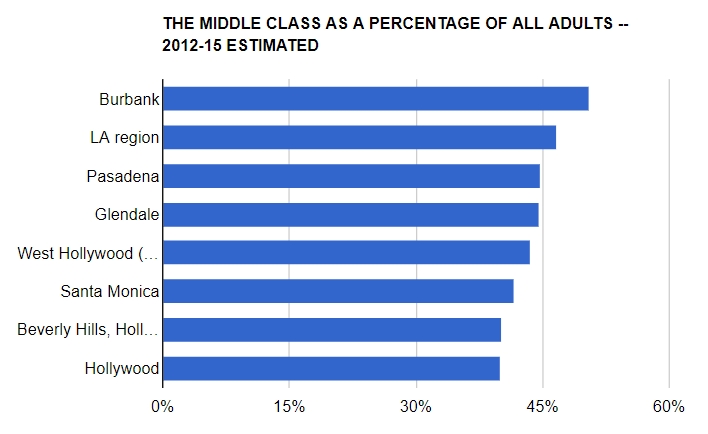 An estimated 44% of West Hollywood residents are middle class. That puts West Hollywood in the middle among nearby cities. The estimates come from a new report by WeHo by the Numbers, based on census data and an earlier analysis by the Pew Research Center.

The middle class can be defined by income, assets, demographics, education, aspirations or other factors. The report uses a broad income-based definition developed by Pew. Pew started with the median household income in the US in 2014. (Median means that half of households made less, half made more.) It assumed that middle-class households were those that made between two-thirds of and twice the median income. Then they calculated the required income for different household sizes.

The income ranges are fundamentally assumptions, subject to debate. The report raises the possibility that the low ends may be too low. For example, according to the federal government, a Los Angeles County resident making less than $50,500 is eligible for low-income subsidized housing programs. Despite the questions, the reports sticks with the broader ranges derived from Pew’s analysis.

Pew’s approach cannot be used directly to estimate the size of West Hollywood’s middle class. The detailed census data is not available for a city as small as West Hollywood. The report instead proposes three estimates based on three different approaches. The preferred estimate is 44%.

The report compares West Hollywood to nearby cities. The middle class appears to be a larger share of adults in West Hollywood (44%) than in Hollywood (40%), Beverly Hills (40% for the area that includes the city), or Santa Monica (42%). It is smaller than in cities such as Burbank (51%), Pasadena (45%), and Glendale (45%). It’s also lower than the regional average of 47%.

To find out more, see the full report, How big is the middle class in West Hollywood?

There is no income data here for the remaining 56%, so you can’t assume “most of us” are all below the middle class mark and find rent is beyond affordability.

Only 44%, a minority and there’s a minority within that Minority be it lifestyle or age. And THAT explains the unbridled development activity and landlords’ pushing rents beyond affordability but most of us.