Faced with a shared bike program whose revenue has fallen far short of expectations, the West Hollywood City Council is considering making the program free for local residents.

A city report on the bike share program, which launched in August 2016, said total revenue generated by program membership fees and individual ride fees equaled only 13% of projected revenue. The program also fell short of expectations for advertising and sponsorship revenue. It had an overall loss last year of $386,799, which doesn’t include city’s initial capital investment of about $500,000. 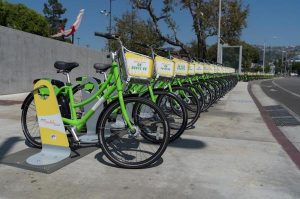 At its meeting last night, City Councilmember John D’Amico proposed what he called a “radical” solution to the revenue shortfall issue — making it free to all. D’Amico said a one-year free program would be a way to get more residents to give the program a try.

The city is exploring joining a Westside network of bike share programs that includes Beverly Hills, UCLA and Santa Monica and would be called BikeShare Connect. Tiffany Robinson, a city senior planner who is the coordinator of the bike share program, said providing rides for free would be a problem because the network is a shared revenue program. But that prompted a recommendation from Mayor John Heilman that the city actually buy an annual membership for West Hollywood residents, who currently make up only 37% of the city’s bike share riders. The rest are tourists and other visitors.

The Council agreed to forward that proposal to the city’s Transportation Commission for discussion.

Other issues raised by council members were the weight and ease of use of the bikes, which Councilmember Lauren Meister and some local residents described as heavy. Another concern is the location of bike stations. There are 21 of them, with two located at the Grove shopping center and 19 in West Hollywood. The program has 150 bikes. Most of the stations are along Santa Monica Boulevard. Councilmember John Duran said the city should consider putting bike parking stations in areas with a large number of apartments such as Cynthia Street between Palm and Larrabee.

Another issue raised by Councilmember Lindsey Horvath is bike infrastructure. Horvath recommended changing bicycle signs to more clearly communicate to vehicle drivers that bikes have a right to operate in traffic lanes.

Councilmember John Duran said he thought it would take time for residents to adopt the bike share program. However, he said the decision to drive a car rather than ride a bike isn’t a matter of price but of convenience. “It’s so much easier to get in your car to go to Pavilions.”

Another issue the city faces is the emergence of so-called “dockless bikes.” These are bikes rented for short term use that are tracked through a GPS system by their owners. Such bikes ultimately could be competitors to the bike share program of the Westside cities.

Successful bike share programs ONLY exist where there are A) practical users who need first and last mile transportation to/from transit stations (San Jose, Seattle, WashDC) and B) tourists and day trippers who want a fun, safe place to just go for a ride (San Diego promenade, Chicago lakefront trail, NYC Central Park or westside riverfront). WEST HOLLYWOOD HAS NONE OF THOSE. Green programs might make everyone feel good about themselves and their city, but there are few bike lanes, no large parks, no waterfronts, and no practical train stations here. Who the hell needs a bike? For what? The… Read more »

While I’m shocked at the half-million dollar price tag for 150 bikes, I think this program needs to be expanded and regionalized. These programs work. This is a resource which is badly needed in our toxic car culture. Change comes slowly, let’s not be short-sighted as we implement regional and holistic solutions to transportation issues. P.S. These are not meant to be distance bikes, so the issues of weight are kinda silly.

These bikes are a blight on the city streets. Ugly, bulky & a that color is offensive to the eye. They look junky & if I had a business with these putrid green eyesores cluttering the front of my business, I’d be very upset..

Bikes at Walmart are inexpensive and do the job. If your into doing professionally then you need a better bike which could be quite expensive. The city bikes are heavy and ugly. Biking is easier around town where parking a car is a hassle. It’s fun bike riding also. Everyone should give it a try. Bet you’ll like it.

It’s only 150 bikes (very expensive, too) and letting the residents use them free for a limited time is a marvelous idea. Try it, you might like it.

I just want to know where that photo came from as it appears all 150 bikes are along San Vicente with the neon diver lady (currently on SMB near IHOP) behind it.

Great news. Unfortunately it is super dangerous to ride on the streets with drivers that are inevitably distracted and impatient. All best to all the new users. Have at it and be safe.

Where is our sense of humanity?

Whoa veracity…NOT voracity..slip of the key. Meanwhile in Manhattan, Mayor De Blasio made a move on his plan “Turning the Tide on Homelessness to create new homeless shelters in every neighborhood. Scheduled to open in March, nearly adjacent to One57, the former Park Savoy Hotel will be one of 90 and house 150 residents with full services providing security , mental health and substance abuse and career counseling. Much to the probable consternation of developer Gary Barnett’s well heeled residents……the question becomes why not have the solution IN your neighborhood rather than looking past it. Since we will be meeting… Read more »

@Manny, I didn’t say that residents aren’t paying anything for it, and made no mention of property taxes. I said that half of the city’s revenue comes from sales tax and TOT, and that is accurate. I also didn’t say that tourists are going to use it as much as locals (especially if the locals get it for free). The way I see it, much of the city’s revenue comes from people staying in hotels, eating in local bars and restaurants, shopping, etc.. And plenty of non-residents come into the city for the same thing, all the time each and… Read more »

Where is our sense of humanity?

@ Adam: Well tuned into reality. So how about this version: The frequently voiced verbiage about “millions” being pumped into affordable and low income housing, outreach, beds, services……..has little visibility and less voracity to the folks that encounter too many events on the street on a daily basis. Presumably this small economically sound city should have the ability to be nimble and efficient. Issues tackled by the city often move at a glacial pace after multiple consultants, well paid staff and others weigh in. The pace often looks like the federal government or turning a battleship around in high seas.… Read more »

@Where is our sense of humanity?

We should be asking you, “Where is your sense of reality?”

@Randy….Property Tax collected is equal to TOT at about 19% each. Plus the 37,000 residents of the city pay a large portion of all other taxes. Tax revenue is used by municipalities on behalf of it’s residents and for the betterment of the community.

I guarantee you, the affluent hotel guests are not interested in riding around in a cheesy and heavy bicycle with a basket to Gelson’s and back with their dinner. They’re walking to the Tower Bar or Ubering to Brentwood or Santa Monica. The hotels are also unlikely to want Bike Share racks outside their fancy hotels.