In 2017, the number of West Hollywood violent crimes declined 8% to the second-lowest level in the city’s 33-year history. At the same time, the number of property crimes rose 5%, eking out a 19-year high. That is according to a new report by WeHo by the Numbers, based on city and state data. The report focuses on eight crimes: homicide, rape, robbery, aggravated assault, burglary, grand theft auto, theft and arson. They are called “Part 1” crimes in the FBI’s crime reporting system. 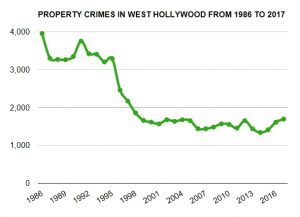 The overall number hides an 8% year-over-year drop in violent crime. (It was more than offset by an increase in property crime.) The violent crime decline came mainly from fewer aggravated assaults.

About 250 violent crimes were reported in 2017. They averaged five a week. Roughly speaking, there were two robberies and two aggravated assaults per week, two rapes per month, and one homicide during the year.

It was the second-lowest level of violent crime since the city’s incorporation in 1984. (The lowest level was in 2013 and it was 15% lower.) The 2017 number was half what it was in the city’s first years and a quarter of the peak in 1991. It was a third below the count from 2010, the highest year in the past decade.

The report provides comparable numbers for Culver City and Los Angeles. Culver City experienced a 12% decline in violent crime in the first 11 months of 2017, compared to the same period in 2016. The drop was mainly due to fewer aggravated assaults.

In contrast, violent crime grew 4% in Los Angeles in the first 50 weeks of 2017. The increase was driven by robbery and aggravated assault. Homicide and rape fell 6% and 11%, respectively. 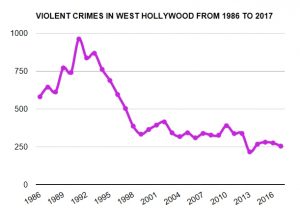 Unlike violent crime, West Hollywood property crime grew by 5% in 2017. The increase was almost entirely due to a jump in vehicle burglaries (stealing items from cars). The jump overwhelmed decreases in stolen cars and petty theft.

There were almost 1,700 reported property crimes in 2017. They averaged about five per day. Roughly speaking, there were four thefts (including vehicle burglaries) per day, four burglaries and two stolen cars per week, and two arsons during the year.

The number of property crimes was the highest it had been in almost 20 years, though not by much. Half of the intervening years had more than 1,600 property crimes.

West Hollywood’s 5% increase in 2017 was bigger than Los Angeles’ 1% uptick in property crimes. Los Angeles’ increase was driven by modest growth in burglaries and vehicle burglaries.

In Culver City, property crimes were down 10% through November. There were big drops in burglary and grand theft auto, after they spiked in 2016.
Not all property crimes went up and not all violent crimes went down. Arson, grand theft auto, aggravated assault, and residential burglary declined in 2017. They also wound up below their respective 10-year averages. Aggravated assault, for example, fell 20%, bringing the number down to about 40% below average. On the other hand, the number of petty thefts fell 12%, but was still about 20% above the 10-year average.

Three crimes both increased in 2017 and ended up above their multi-year averages. They were vehicle burglary, rape, and strong-arm robbery. The number of vehicle burglaries spiked in 2017 to almost 500. That was over 70% more than the prior year.

To find out more, see the full report, Did West Hollywood crime go up or down in 2017?

I always look forward to your articles, and find them fascinating. HOW you do it is a mystery to me, but I’m glad there are people like you who can and do.