She’s back! (Could it be she hasn’t made up her mind? Or does she just like the publicity?)

While she bills her video series on Fox News Insider as “Final Thoughts,” Tomi Lahren apparently hasn’t finished thinking about West Hollywood and its status as a “sanctuary city.”

Lahren was back on WeHo’s Santa Monica Boulevard this afternoon for another round of interviews with people on the sidewalk. That’s after having questioned a handful last Sunday afternoon. Her interviews then in WeHo and on and around Venice’s boardwalk showed that not many in either place agreed with Lahren’s defense of the Trump administration’s opposition to local governments declaring they will not cooperate with federal efforts to detain and deport undocumented immigrants who have not committed serious crimes.

Lahren, 25, a South Dakota native who now lives in Los Angeles, on Wednesday shared what she learned in a conversation with Sean Hannity, the conservative commentator.‏ “A lot of Californians are into the whole ‘peace, love and welcome everyone’ — unless you’re Tomi Lahren or Fox News,” she said.

“It’s a very liberal area. It’s what they call the epicenter of the Resistance, and they certainly know who I was, and there were some words that I can’t repeat on national television that they were screaming at me.”

This time Lahren was welcomed back after she tweeted earlier in the day that she was “heading back to WeHo today. Let’s chat. See you soon.”

And then said @TomiLahren: “So you hate Fox News. Why? Come talk to me in West Hollywood in 30 mins.”

The City of West Hollywood (@WeHoCity), arguably the most liberal city in Southern California (although that’s something Santa Monica might contest), welcomed Lahren with its own tweet: 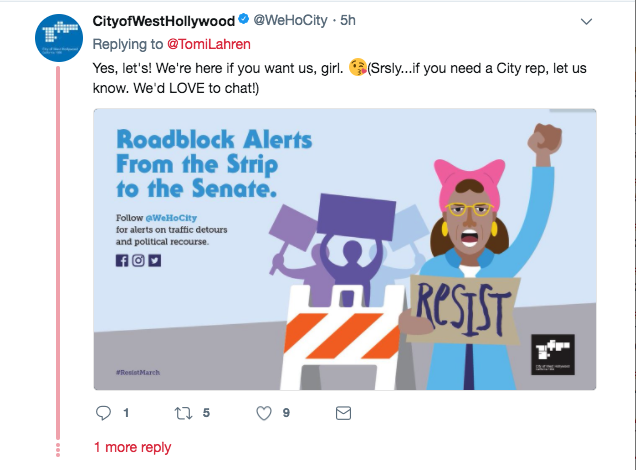 That meeting happened. “Nice meeting you Tomi!” tweeted Lisa Belsanti, West Hollywood’s director of communications. ”Enjoy @WeHoCity — epicenter of the #resistance. We cherish the First Amendment and your right to be a provocateur. Disagree with you 100% on sanctuary cities and our glorious sanctuary state but welcome you nonetheless.” 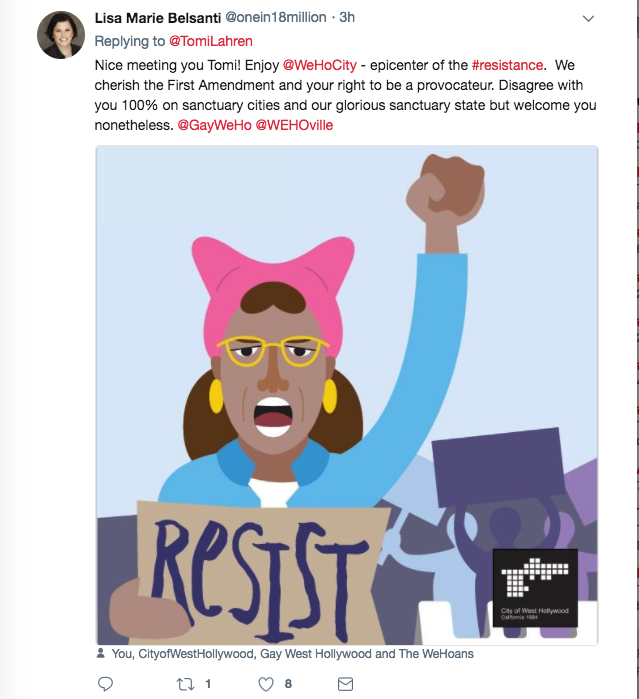 Lahren’s latest round of interviews with WeHoans is likely to air on a coming episode of Fox News Insider.

So I watched her episode on Fox. She came across as respectful to those she spoke to and was not doing “GOTCHA” journalism. She did run into a few petty individuals. Just wish I could have been there wearing my MAGA hat and seen the reaction and heard the comments that would have been thrown out at me, especially when they learn that not only am I a conservative, I am also Gay and did not drink the kool-aid.

More than half of the population of California does NOT want open borders and all of our tax dollars going to welfare programs…. I am 5th generation Californian and hate what this state has become … sacramento libs do NOT speak for me or many many in my So Cal town… would love to talk to Tomi so Fox News knows they have quite a following here and many trump supporters!! He is a populist President who we desperately needed, now more than ever…. so much wrong with the “powers that be” in DC and in the world

Conservatives deport people who have come to here to work and escape oppression. They try to take away women’s reproductive freedom. They were solidly against equal protection of the law when it came to our marriage rights. Yet they try to claim they are the victim because people don’t like them? LGBTQ folks didn’t choose our status, conservatives choose to be terrible people. Own it, Tomi.

She’s just 25 and from South Dakota. Doesn’t seem very worldly to me. Why are we paying any attention to her? Why am I typing this comment???????

My guess is she chose Santa Monica Blvd and Venice Boardwalk hoping to find some colorful clowns that conservatives could laugh at, but instead found well-spoken and informed people for the most part. She’s dreadful.