Vehicle burglary and rape were exceptions to the overall decline in crime in the first half of 2017. That is according to a new report by WeHo by the Numbers that looks at recent crime trends using city data.

Total violent and property crime had been trending upward since reaching a low point in 2014. The number rose 5% in 2015 and 11% in 2016. However, the number declined 7% in the first half of 2017. That suggests the upward trend has been arrested, at least for now.

Rape was another exception to the overall decline in crime in the last six months. It is difficult to isolate the real trend, because of a 2015 change in the definition of rape for reporting purposes. The change increased the number of crimes categorized as rape, so one cannot directly compare recent data to pre-2015 numbers.

Nevertheless, the available data suggest an increase in the number of reported rapes and sex-related felonies. In the first six months after the definition changed, there were six reported rapes. Since then, there have been 12 to 14 every six months. The combined number of rapes and sex-related felonies went from nine in the first half of 2014 to 26 in the second half of 2016.
The trend line for aggravated assault pointed down throughout the last three years. The number fell 15% in the last six months. Arson has also declined: there were only two in the first six months of 2017.
The trend is not clear for burglary — which has had ups and downs over the last three years – or for homicide, which is rare.

For more information, see the full report, What are the crime trends in West Hollywood midway through 2017? To see crime statistics and comparisons for any of 463 California cities, visit the crime dashboard. 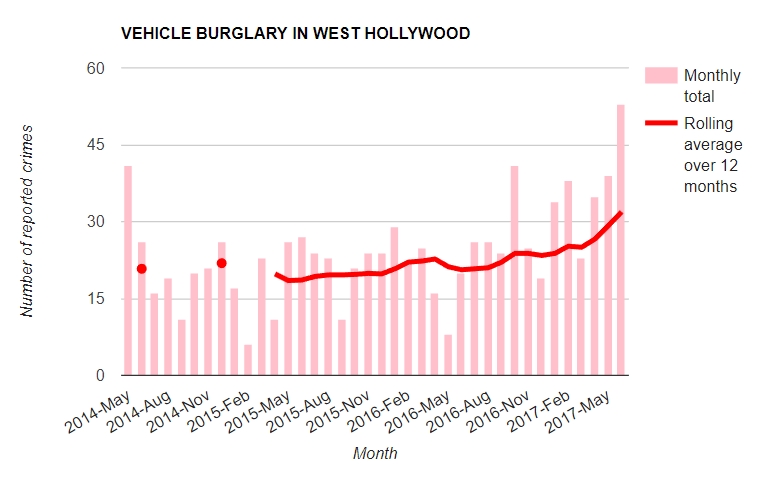 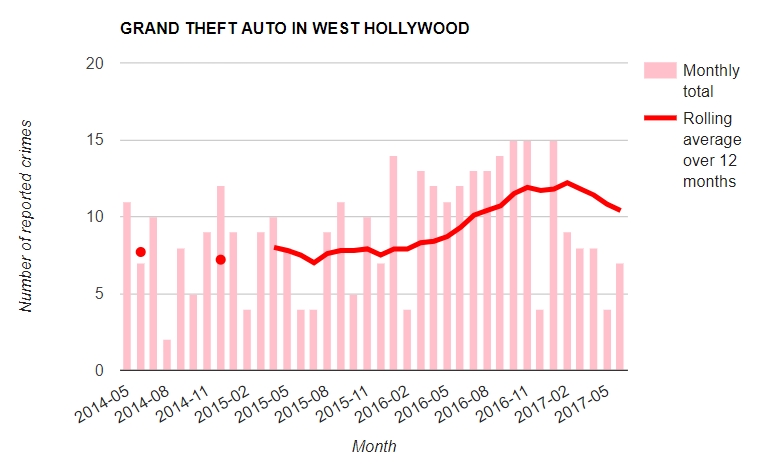 This is BS. Crime is crime, and, they are not even accounting for how many buildings have their garages broken into and things stolen, because those crimes are not always reported to the Sheriffs. And if they are reported, they are extremely low level to them.I do not concur with these numbers.

@ Shiela: Although not cynical, it seems clear that perhaps the true business plan for WeHo was and is a transient community…a somewhat different version of Las Vegas. The resulting giant monopoly board seems ingenious with various city commissions and advisory boards in place to keep the residents preoccupied believing that can actually affect the big picture or any outcome for that matter.

It’s more than people not paying attention, but I agree with that as adding to the problem. WeHo is also turning into a very transient community, with the rise of hotels, Airbnbs, developers buying and selling to make a buck, so much construction that many homes and buildings sit empty for long periods during endless construction. This is becoming less of a community and more of a place you come to visit, party, or make a buck off of, and those folks do not care about the community in the same way. The powers that be in WeHo gov’t are… Read more »

The city of easy opportunity. With so many noses in their phones, few are paying attention.

A link to the new reporting standards would have been helpful.
https://ucr.fbi.gov/recent-program-updates/new-rape-definition-frequently-asked-questions

Great. I only have to worry about being raped while my car is being broken into.