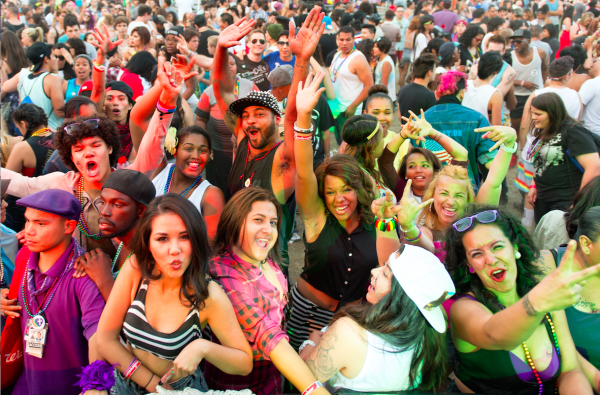 A report to the West Hollywood City Council summarizes criticism of last year’s L.A. Pride event by those who found it expensive and exclusionary. But it also includes a survey that shows the overwhelmingly young crowd who actually attended it had a good time.

The critiques come from summaries by consultants hired to moderate two public forums after the controversial event.

In her report, Diane Burbie of The Aspire Group identified the following concerns that surfaced during the July 20 forum:

— Perceptions that the event’s “brand” is shifting from celebration of the LGBT movement to a music festival
— Ticket prices viewed as out of reach for many
— Noise levels that were disturbing to some residents
— Congestion and parking on neighborhood streets
— A failure to provide timely responses and decisions during the planning process, and
— Fewer no-nprofit organization booths

Other issues noted by city staffers attending the forum were:

— A desire to see more focus on the lesbian and transgender communities
— An abundance of trash and debris on neighborhood streets following the event
— Feelings of lack of inclusivity from certain groups, and
— Concerns that LGBT history is being forgotten.

A summary of issues from the Aug. 17 forum facilitated by Chris Robert of The Robert Group and focused on future Pride events included desires for:

Both forum facilitators noted a demand for more financial disclosure from CSW, which recently provided a copy of its 2015 tax return to City Hall. WEHOville also obtained a copy of the return. CSW has yet to make public the results on last year’s Pride events, although a CSW financial statement provided to WEHOville showed a loss of $395,000.

CSW’s plan to reprogram the annual Pride event as a music festival targeting millennials was very controversial, with some LGBT organizations saying they might boycott the event. It also was criticized for plans to scale back lesbian and transgender events, criticism that led CSW to extend hours for those events.

CSW conducted its own on-site survey of those attending the Pride festival in West Hollywood Park, which indicated that it had a strong appeal to millennials, who generally are defined as those ages 18 to 35. The survey was administered by Lauren Schlau Consulting (LSC}, a Los Angeles-based special events market research specialist. According to that report, a total of 33,800 people attended the festival on Saturday and Sunday. On Friday night, which was free to attendees, the estimated attendence was 15,000 to 17,000. LSC surveyed 380 people.

Eighty percent of respondents were under age 35 with the median age 27.3. Eighty-three percent rated West Hollywood Park as an excellent or very good location for the Festival. Seventy-eight percent said L.A. Pride was extremely or very relevant to the community as it is now produced. L.A. Pride received an overall “relevance” rating of 4.22 (out of 5}.

Other details from the survey include:

— Eighty-seven percent of attendees were Californians, with 29% living in the state but outside Los Angeles County. Another 11% came from across the country and two percent from outside the United States.

— Southern Californians represented 76% of attendees. Of those, 55% lived in the Los Angeles area with 10% from Orange County and 8% from Inland Empire areas.

— Eighty-one percent of the California residents identified as LGBTQ and 17% as non-LGBTQ.

— Forty-one percent of attendees surveyed identified themselves as Latino/Hispanic, 40% as Caucasian, 11% as African-American, 7% Asian- American and 6% as Native American.