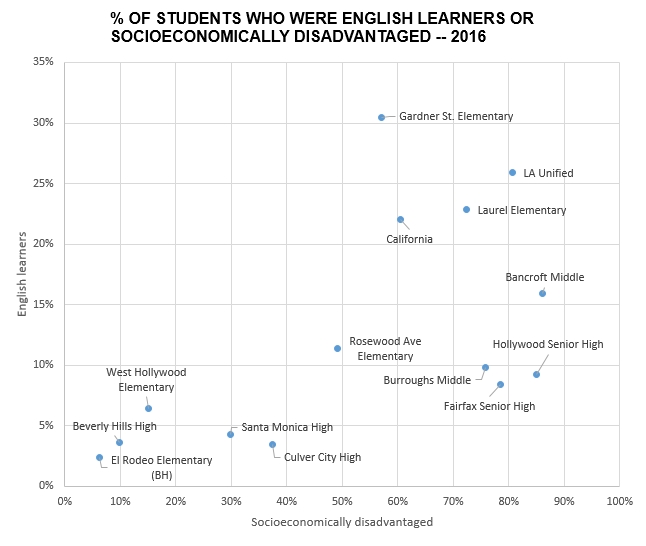 Disadvantaged students make up a majority of the students at local public schools serving West Hollywood. That is according to a new report by WeHo by the Numbers based on data from the California Department of Education.

“Disadvantaged” means that the students come from low-income households, are in foster care, or are learning English. They have, on average, lower educational outcomes because of these challenges. The new funding aims to help schools change that. As Gov. Jerry Brown has explained, “Our disadvantaged students deserve more resources to overcome the extra obstacles they face.”

The accompanying chart from the report shows how many students at each school were socioeconomically disadvantaged (low-income) or learning English in 2016. Some students were both. For comparison, the chart also includes a nearby Beverly Hills elementary school (El Rodeo) and four nearby high schools: Beverly Hills, Culver City, Hollywood, and Santa Monica.

West Hollywood Elementary was the seventh local school. Fewer of its students were socioeconomically disadvantaged: 15%. That was higher than the two comparison schools in Beverly Hills but lower than the two schools in Culver City and Santa Monica.

The share of students who were English language learners ranged from about 5% to 30% at the schools serving West Hollywood. West Hollywood Elementary was again on the low end. Gardner Street Elementary was on the high end. It was the only one of the seven with more English learners than the LAUSD average of about 25%. The four schools in Beverly Hills, Culver City, and Santa Monica had less than 5% English learners among their students.

My biggest beef with West Hollywood Elementary School is that 26 years after passage of the Americans with Disabilities Act, and FORTY-TWO YEARS OFTER the passage of the Education for All Handicapped Children’s Act, that school STILL does not have a SINGLE bathroom that a child in a wheelchair could access, nor an elevator to second-floor classrooms, nor (at least as recently as last MLK Day) a ramp to access the classrooms in the annex.