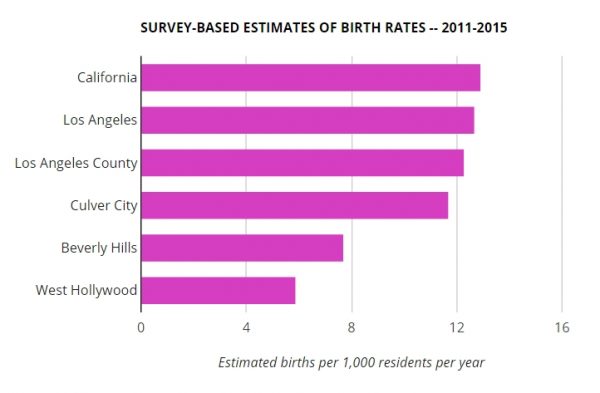 West Hollywood’s birth rate is lower than that in nearby cities, the county and the state. That is according to a new report by WeHo by the Numbers.

The Los Angeles Times recently reported that California’s birth rate has fallen to its lowest level ever. There were 12.42 births for every 1,000 residents from mid-2015 to mid-2016.

The report looked at the equivalent birth rates in West Hollywood and nearby cities. It estimated that a little over 200 West Hollywood residents gave birth annually. That was six births per 1,000 residents per year, or 22 births for every 1,000 women aged 15 to 50.

The estimate was based on data from the U.S. Census Bureau. The Census Bureau surveyed residents from 2011 through 2015 and estimated the number of women who had given birth in the prior 12 months. West Hollywood’s estimated birth rate (six per 1,000 residents) was less than half of California’s (13) and Los Angeles County’s (12) during the 2011 to 2015 period. That was also true for births per 1,000 women ages 15 to 50.

Birth rates in Beverly Hills and Santa Monica fell in between those of Los Angeles and West Hollywood.

To find out more, see the full report, What is West Hollywood’s birth rate?

Personally, I appreciate the information provided by David Warren’s “WeHo by the Numbers” column, but I can understand not everyone might agree; and for those who don’t, I’d offer some friendly advice and suggest saving yourself some money by cancelling your subscription.

Thank the gods for small favors in the numbers. While I don’t agree with Maddie’s delivery I would welcome a serious discussion of the numbers of infections per capita vs say San Francisco zips with similar demographics. This not to feed a gay v. straight debate as now a days Tinder gives Grindr a run for its money.

I havent heard a politician utter family friendly in years. It’s not a family friendly city. It is a family inviting city, but our demographics don’t lend themselves to family friendly. What I have noticed in my neighborhood, is that once a couple has a baby, they move to a cheaper place to buy a larger home. That goes for gay men who adopt also. And Maddie, you sound like a deploreable. Disease shaming is a repugnant attribute.

WeHo is very family unfriendly by its high costs. Our kids already have houses in Sherman Oaks and Tarzana. And most of 4000 Russian immigrants are too old to gave birth. So, in a few years WeHo will not need Russian Advisory Board and WeHo Comprehensive Service Center.

@Maddie Ross: Is that a confession?

“The Gays Aren’t Making Babies” is definitely worthy of second-coming headlines. Now tell me the incidence of sexually transmitted bacterial infections is twice that of city and county of Los Angeles.

Considering that West Hollywood’s population is composed of more than 40% gay men, senior citizens & Russian immigrants, I don’t find this headline too shocking. In fact it’s a no-brainer. By most accounts, West Hollywood has always been considered an adult city & there is nothing wrong with that except for those politicians who have been trying to change that status, at the behest of the developers who want to make WeHo more “family friendly” in order to increase the values of their developments/rental units/condos etc.

PLEASE STOP WITH NONSENSE “WEHO BY THE NUMBERS”

WeHo is UNIQUE in so many ways.

Likewise, a young married couple next door to me liked weho, and MOVED when they became pregnant with their first child.

WeHo is very family unfriendly by its high costs, congestion, and so many people and cars, is not conducive to family living (compared to many other neighborhoods.