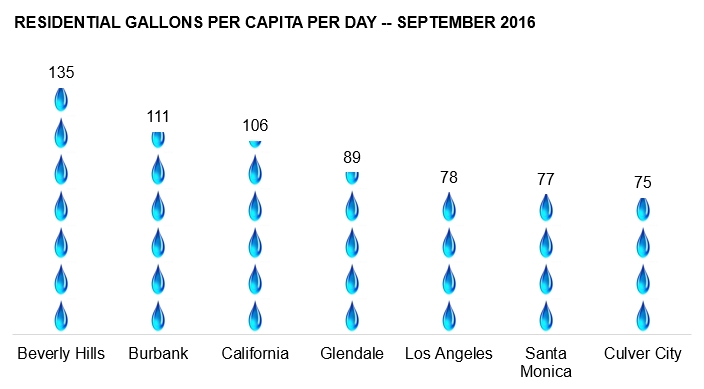 Average water use varies from 75 to 135 gallons per resident per day in nearby cities. That is according to a new report by WeHo by the Numbers based on data from the State Water Resources Control Board.

West Hollywood does not have its own water department. The cities of Los Angeles and Beverly Hills provide the water here. The report compares their residential usage to other cities. The calculation excludes water used by businesses, farmers, and other non-residential users.

Compared to nearby cities, Beverly Hills has the highest residential water use: 135 gallons per person per day. Burbank’s residents use 111 gallons a day.

The report also compares Beverly Hills and Los Angeles to the rest of California’s urban water suppliers. Their residential water use ranges from 40 to 470 gallons per capita per day. The California average is 106 gallons, taking into account the number of people served by each supplier. The California average is right in the middle between Beverly Hills (135) and Los Angeles (78).
The report ranks the suppliers by residential water use per capita, without trying to adjust for climate. Beverly Hills ranks 131st. Los Angeles ranks 315th. Santa Monica and Culver City are almost the same (317th and 326th).