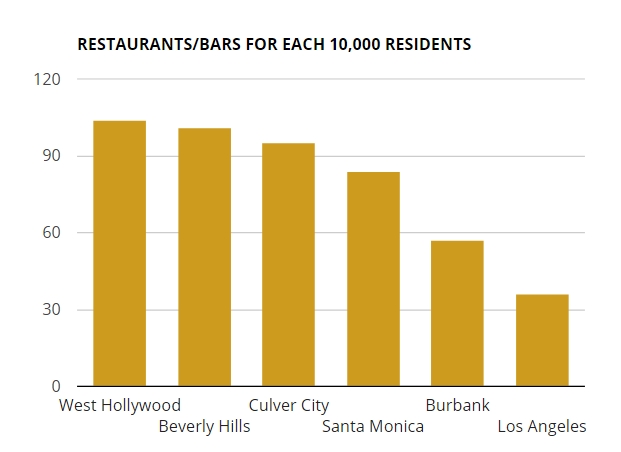 West Hollywood has 372 restaurants and bars, more per resident than in nearby cities. That is according to a new report by WeHo by the Numbers. It is based on a list of inspections performed by the County of Los Angeles Department of Public Health. The count includes restaurant-like parts of grocery stores, such as bakeries, but not food trucks.

@Jerome: Would love to see a link to that information….that is absurd. Have you ever been to Chicago, NY, London, Tokyo?
I’m sure we don’t rank in the top 200 cities.

It’s at Booksoup so go today to get informed.

One could dine at a different place every day of the year! Its time to put some new places on the list so we all have some new favorites.

this is great news,,, that’s why I bought a place here in WEHO, so I can walk to the bars, rests and stores……YES !!!

What is really going on?

Weho seems a de facto commercial district with residents being ulitized as ornamentation. Before long the majority of “residences” will be airbnbs. Residents are but guests in their own city and frequently treated as disposable objects entertained to the extent that they feel involved and useful.

Actually a travel guide for decades said that West Hollywood had more restaurants per square mile than any city in the world.