Estevan Montemayor, chair of West Hollywood’s Public Safety Commission, has asked that it consider recommending the City Council enact a ban on the sale of meth pipes.

Those devices typically are small pipes made of glass with a bulb on one end. They are sometimes called “oil burners” and frequently are available in tobacco shops.

Montemayor’s request was the commission’s latest response to the meth epidemic in West Hollywood. Methamphetamine is a highly addictive drug whose use is common among gay men, who make up 40% of WeHo’s population. Among other things, it stimulates one’s sex drive. It also can lead to a number of serious health issues including premature death. 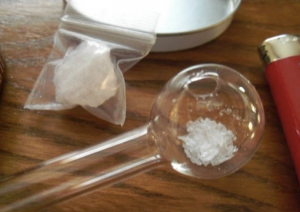 Montemayor and members Ben Coleman and Tory Berger raised the meth issue at the commission’s Oct. 10 meeting, urging the West Hollywood Sheriff’s Station to do more to arrest meth dealers.

While a major issue in the city’s gay community, the use of meth has gotten little official attention from the city’s elected leaders, some of whom have focused on the availability of help for drug addicts rather than taking steps to curb addiction.

That changed somewhat when WEHOville published a story on Sept. 19 that noted that Grindr, a mobile phone app that gay men use to find sexual partners, allowed dealers to openly market meth. Grindr is headquartered in West Hollywood.

Mayor Lauren Meister said she would arrange a meeting with Joel Simkhai, the founder of Grindr, to discuss the issue. To date Simkhai hasn’t agreed to meet. However, some weeks later Grindr did take steps to block the use of emoji and text that signaled drug sales and use on the app, something its major competitors had already done.

Patrick Shandrick of the city’s Human Services Commission raised the meth pipe issue at a joint meeting last night with the Public Safety Commission.  Shandrick said that meth pipes are visible in the windows of some shops and might trigger those in recovery to reuse.  If the city can ban the sale of fur it should be able to ban the sale of meth pipes, he argued.

In an interview with WEHOville, Montemayor said he agreed with Shandrick. “Why is it possible for the city to ban fur, but it hasn’t banned the sale of meth pipes?” he said. “It’s wrong. We care about the most vulnerable, including our animals, and we also need to care about the people on our streets who are vulnerable to this very addictive drug.”

Human Services Commissioner Steven Davis spoke against a ban, saying he felt it would only move the sale of meth pipes underground. Davis said that, as a business owner, he was opposed to such bans.

The pipes are sold mainly in tobacco stores and I can see their eventual demise in a short time due to the new tax.

There are other ways to smoke meth, I don’t believe those who can’t find a pipe are going to just opt for a needle in the absence of the glass pipe. Banning the pipes just makes it clear that the city does not subtly condone the use of meth by providing easy access to the paraphernalia identified with it. It sends the message that it’s not acceptable. I support that message. There’s no downside to this.

It’s better than doing nothing. What is the point of these pipes if it’s not for getting high? It’s like don’t do meth – but if you wanted to you can easily buy and start now.

If they can ban a plastic bag….

There are two Mike’s commenting on this thread and I am sure all that are contributing realize this. The first Mike (me) is under DS. The second Mike-2, well….

Defeatist attitudes and negative references to Nancy Regan contribute NOTHING to the wide landscape of drug prevention and treatment.

I’m glad our city’s Human Services and Public Safety Commissions are contributing positively and pro-actively to a multifaceted, and difficult human condition.

You keep talking about addicts, what about people who aren’t addicts? What about helping to prevent people from becoming addicted to begin with? I don’t like the idea of banning things, I also don’t like allowing pipes to be sold when we all know what they are used for.

Government shouldn’t stand by while realtors are commercializing off the backs of the most vulnerable. Store owners should be ashamed they are selling these products. No place for them in WeHo.

There has never been a “pause and think about what they’re about to do.” Sadly, an active addict will always seek and find. This is an addiction and disease. Never, in the thought process does it enter the mind of an addict; do I want to think about this??? Education, treatment for addiction and mental health is the solution. Only when the addict wants to change will the help, hopefully will be there. In the moment, the addict wants the drug and will find what they need and always take the addictive substance. No pipe at this store – yeah,… Read more »

Wait, these are legally sold? Ban them! Ban them yesterday!

Addicts are the most resourceful people on earth. If you ban one method, they will move to another (e.g. slamming, snorting). Stop with the Nancy Reagan methods – they are no match for aggressive drug cartels and their pushers.

Nothing “big government” about banning a tool that facilitates the destruction of lives.