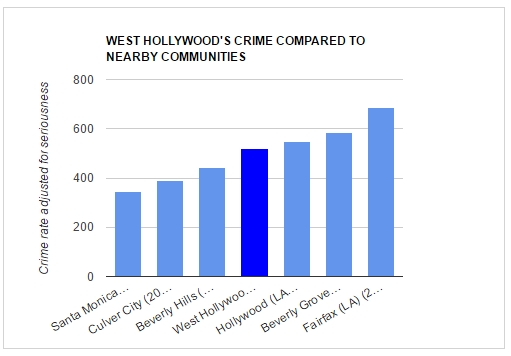 West Hollywood’s crime rate — adjusted for the seriousness of the crimes — is lower than in nearby Los Angeles neighborhoods, but higher than in other Westside cities. That is according to a report by WeHo by the Numbers, based on its new crime “dashboard.” The dashboard analyzes crime in West Hollywood, Beverly Hills, Culver City, Los Angeles, Santa Monica and hundreds of other California cities.

The dashboard starts with each city’s crime rate. The crime rate is the number of violent and property crimes reported in a year, divided by the population. It is the most common way of comparing crime across jurisdictions and time periods. The FBI and the State of California use it. The dashboard’s 2016 estimate for West Hollywood is 527 crimes per 10,000 residents. That is extrapolated from the sheriff’s numbers for the first nine months of the year.

The dashboard then adjusts the crime rate to take into account the seriousness of the underlying crimes. If a city has more crimes like armed robbery and fewer like petty theft, the crime rate is adjusted up. If a city has proportionately fewer serious crimes, the rate is adjusted down. The dashboard uses prison sentences set by the California legislature as the measure of seriousness.

The dashboard looks at the adjusted crime rate over the last 10 years or so. In West Hollywood, the rate dropped significantly in 2013. It stayed around the same lower level for three years. This year, it appears to be rising back toward the pre-2013 level.

According to the estimates, the adjusted crime rate is up 14% this year versus 2015. That would leave it a bit lower than it was 10 years ago and less than half of what it was 30 years ago. 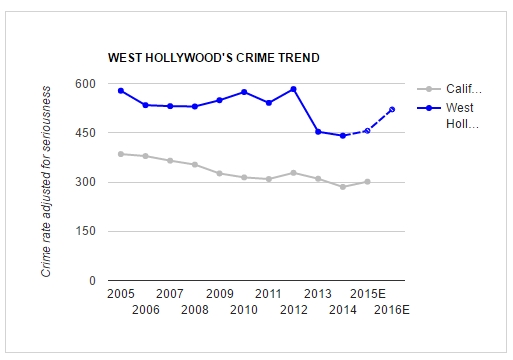 I agree as well-the homeless have taken over many of the bus stops and people actually waiting for buses can’t sit down. The whole area around CVS and the Sal Guarriello Memorial park have gotten out of control-harassing passersby, smoking weed and crack or meth in public, and the whole area reeks of urine and feces. We’ve been spit at, followed, cursed at when ignoring demands for money, and told our dog is an “evil demon” by these vagrants who are obviously drug addicted and/or mentally ill. One jumped the fence at our building several months ago and banged on… Read more »

Yes, I agree with Carleton. The increase in homelessness and some of their aggressive behavior is a very alarming situation. I live near the recycle center by Pavilions which is a magnet for the homeless from all over. I too would like to see the return of the police bike patrol. Nothing makes a city less desirable than a high crime rate. We’d better finds ways to nip this in the bud before the numbers keep going up.

Our little city is like a candy store for opportunistic thieves. It has been this way for all of the forty-four years I’ve lived here. Many of the culprits have been homeless men, many have been “shoppers” from other areas, some come by regularly. We’ve never had enough police to interfere with that activity. When we had bike COPS, things were much better. What’s preventing bike COPS from returning to our streets?