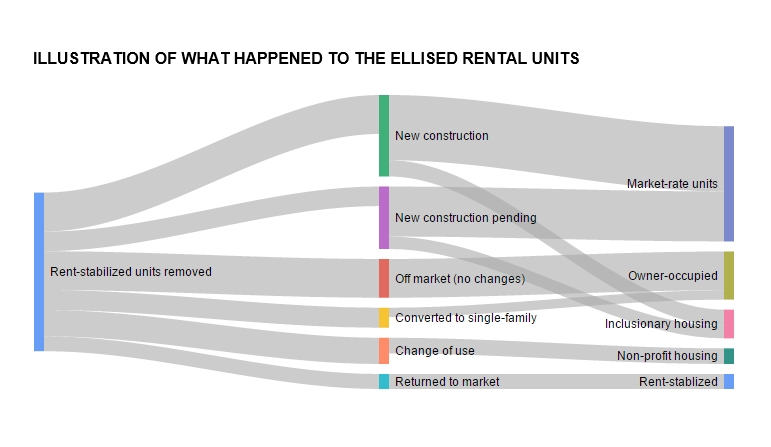 Since 1986, about 5% of West Hollywood’s rent-stabilized apartment units have been removed from the rental market through the Ellis Act. One in ten units was ultimately returned to the market. The rest were converted into or replaced by a larger number of owner-occupied, market-rate and low-income affordable-housing units. That is according to a new analysis by WeHo by the Numbers based on a recent city report.

California’s Ellis Act allows a landlord to leave the rental business and evict existing tenants in 120 days. West Hollywood tenants who are seniors (62+) or disabled get a full year to move. The landlord also has to pay relocation fees to the tenants. The fees are set by the city, which raised them this year. They now range from $6,180 for a typical tenant in a studio apartment to $20,600 for a low-income household.

According to the city report, 764 rent-stabilized units have been “Ellis-ed” since 1986. About 37% of the units (and half of the properties/buildings) have stayed off the market. Either the owner occupied an existing unit or he or she combined two or more units into one single-family residence.

Another 37% of the Ellis-ed units were on properties where new construction has been planned and/or completed. Most of those units probably were (or will be) demolished and replaced by new market-rate apartments or condominiums.

About 16% of the units were converted to a new use, such as a bed and breakfast or non-profit affordable housing. The remaining 10% of the Ellis-ed units were returned to the rental market.

Those numbers, combined with a series of assumptions, were used to create the illustration that accompanies this article. The rent-stabilized units that were Ellis-ed are on the left. Some were replaced by a larger number of newly constructed units. Most of the new units were probably market-rate, but some were inclusionary affordable-housing, set aside for low-income households.

Another set of units shifted from rentals to owner-occupied. Some units were combined into single-family residences in the process.

Among the units with a change of use, some became non-profit affordable-housing. Others stopped being housing altogether. A small group of units were returned to the rent-stabilized housing market.
The illustration shows how rent-stabilized units were lost, converted into or replaced by a larger total number of owner-occupied, market-rate, and low-income affordable-housing units.

The financial impact on Ellis-ed tenants is explored in the full WeHo by the Numbers report, How much rental housing has been Ellis-ed? 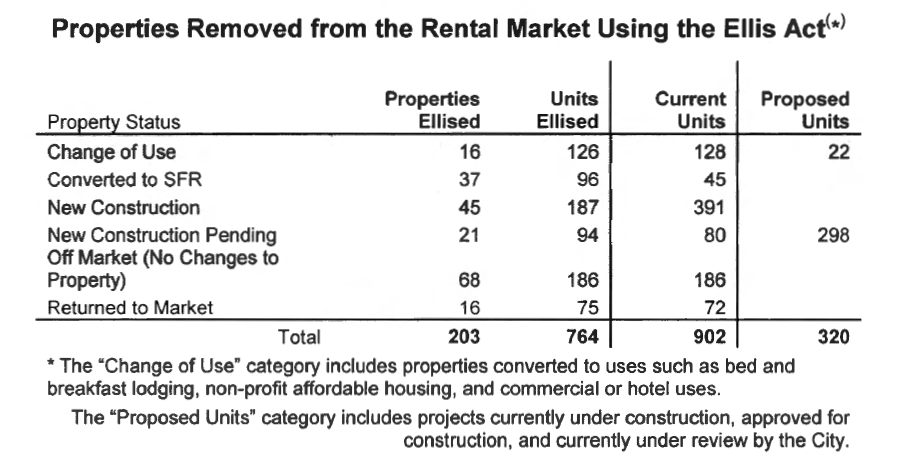 @SaveWeHo Just to clarify – the City of West Hollywood is very involved in evictions via the Rent Stabilization department & commission and through the LA Superior Court. There is no enforcement of paying people to leave as that is not illegal. The City can’t get involved in personal contracts, no matter how unlikable, as that would be an overreach.

I just dont think the city has the enforcement balls to do anything about it. Whether it be enforcing the AirBNB mess or these landlords that evict or pay people to leave their rent controlled units. And it is wrong when these landlords consider these properties their own that they can do whatever they want. NOT WHEN YOU’RE IN THE RENTAL BUSINESS. Its a business like any other and you must abide by laws. So many of these wealthy landlords dont realize that.

Speaking as one who was recently Ellis’ed, that number does seem low. But perhaps it doesn’t take into account those rent stabilized apartments vacated when elderly residents were harassed out and moved away, or those evicted by false claims of owners needing the space for relatives. Some of these apartments eventually ended up in the short term rental market. Fraud does occur, unfortunately, and some owners don’t want to go about things the right way when they see what they perceive as long term tenants taking up prime space in THEIR properties. And some renters, particularly seniors, do not have… Read more »

I’m really, really surprised that in 30 years only 5% of rent stabilized units, it’s really ok to say “units”, (oy vey!) have been lost due to the Ellis Act.

The El Mirador debacle alone makes me think the % would be higher.

Enacted in 1985, the Ellis Act is a California law that allows landlords to evict all their tenants from rent controlled apartment buildings and then either demolish the buildings or turn them into over priced condominiums. The law has been used by real estate developers to destroy any and all low income housing. I consider it a real estate mughal’s weapon of mass destruction against low income housing! According to LA housing advocate Larry Gross of the Coalition for Economic Survival. “It’s being used by big developers who are purchasing for the sole purpose of evicting the tenants and converting… Read more »

It may be more accurate to refer to the housing that was taken off the market as “homes” rather than units. Sometimes these discussions seem very impersonal unless you happen to be the target of an Ellis eviction.