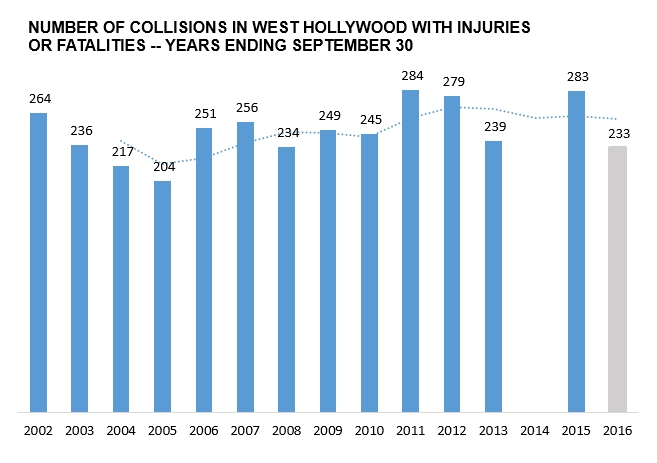 Vehicle collisions in West Hollywood injure people about 250 times a year on average, or about five times a week. That is according to a new report by WeHo by the Numbers based on data collected from local agencies by the California Highway Patrol (CHP).

The chart above shows the number of collisions in West Hollywood causing injury or death since 2002. The years are federal fiscal years, which run from October 1 to September 30. No number is shown for 2014 because that year’s CHP data was incomplete for West Hollywood. For 2016, the report extrapolated from the number already reported to the CHP.

The annual number of collisions varied from 204 to 284 over the past 15 years. The chart’s dotted line shows a three-year rolling average. The rolling average is higher now than it was in earlier years. The variability in the data makes it hard to know for sure what the trend is.

For comparisons to Beverly Hills, Culver City, Los Angeles, and Santa Monica, see the full WeHo by the Numbers report, How often are people injured in vehicle collisions in West Hollywood?

Sorry “By The Numbers” does not work when we (local residents) – Living People are having our daily lives put in danger by the numerous pedestrian/car injuries.

Numbers Mean Nothing – considering the unique nature, pattern and Walk-ability (95%).

I don’t want to be a ‘statistic’ nor any of my friends and neighbors when it comes to the issue of being hit by a car while walking across any street in our neighborhood.

For years, the Traffic Department in West Hollywood has been working to make West Hollywood a safer place for people to drive and walk. The one thing they can’t prevent is a sea change in people’s driving behavior. Too many people continue to text and drive and ignore the laws in this regard. Distracted driving is the most dangerous thing faced by people on the road and in the crosswalks. I am legally blind and use a guide dog to travel. He doesn’t like crossing streets all that much and I don’t blame him given the nature of driving behavior… Read more »