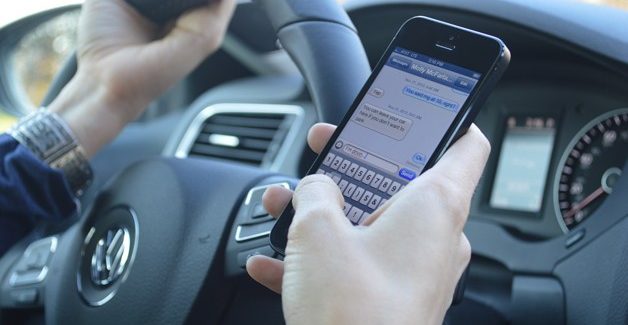 The first of these is our city’s total lack of enforcement of the “No Texting or any other activity that cannot be done while driving” statute. I don’t get it. I am a walker-dependent person and as such, I see an unbelievable percentage of people – usually over 50% – phone in hand – looking up and down and up and down or just with the phone planted on the bottom of their steering wheels, while the drivers are texting away, sometimes gliding from lane to lane or turning right in front of me entering a crosswalk.

If I scream or thump on their fender, they rarely say “oh excuse me” or even ”my bad.” No I have had more than one person say “Hey, I’m on the phone. Keep it down or shut up!” Not only are people not remorseful, they feel entitled to do whatever the hell they want to do.

I also drive. I am a bit of a zealot when I see the person in front of me stopped, looking down and typing away while a light turns green and all of the other cars just pull away. I love my horn at that moment. I have also been known to remind drivers who are swerving from lane to lane when they look up from their phones, when I am next to them at a light, that it is illegal and dangerous to text. And sometimes I am less than cordial with my reminder because I am furious. Usually, they just roll up their windows and carry on.

Its almost like they know that no one is going to “catch” them, so they don’t care. Many other cities are getting very creative with ways to catch texters. I would be happy to be deputized and sit on a street corner and notify the police of a car’s license plate number and color if there was anyone nearby ready to pounce on the violators. I could also take a picture with my phone for verification. Other cities are doing these kinds of things to deal with the problem. You would think that in a city where we have more weird contraptions here and there, and lighted signs about pedestrian safety at places along Santa Monica Boulevard, that we would enforce our driving safety laws.

The other issue I need to mention is those signs that are placed on the centerline on Santa Monica Boulevard. I go east from Sierra Bonita every day by 7 a.m. to go to the gym. There has not been a day where at least one and more likely three of the four of these markers that I pass are either completely knocked down or leaning way into the lane on one side or the other, blocking traffic.

One morning a Metro bus could not pass on either side because there were legally parked cars on the side of the street and both signs he had to pass were in his lane. He stopped, waited for traffic to clear, and just centered his bus on the signs and mowed them down out of frustration. All of the passengers broke out in cheers for the driver. I would have cheered too if I had been there. The final blow happened two weeks ago, when one sign was leaning towards the right, so I switched into the left lane to avoid it. As I passed, another driver whooshed by on the right, and the force of the air that he kicked up swung the sign into my fender – where I have a nice long scratch in the paint. I have a leased vehicle and need it fixed. Who at the city can address this? I fault the city as neither of us drivers was violating any laws.

If the city wants to stop wasting money on constantly repairing and replacing those placards and make the roads really safe for all, then put the flashing warning lights that they have at certain crosswalks at all of them. They work, they last, and they are solar powered.

I agree with all comments made and want to underline the need for greater penalties for texting offenses. Let’s face it – if one of those people causes even a minor fender or bumper bender, then the damage done is many many times the $20 fine amount. How about seizing the phones and tablets. Believe me – that will get peoples attention. I agree about this being a national issue and there is a campaign of PSAs that get my attention when I see them. PSAs are a great attention getter, but until someone suffers some sort of material loss,… Read more »

The fine is almost 4 times that amount for a first time offender.

The Sheriff’s department could easily enforce this. We already have officers on bicycles. They simply need to sweep up and down SMB during rush hour. I have heard of some people being issued tickets in this manner.

I also see people on the phone and/or texting frequently. This law should be enforced. One of the problems is that the penalty of the law is so low that people just don’t care – a $20 fine??? I find it especially bad on the east side where I live, There should be a Russian education flyer about this sent to homes where Russian is spoken. Many times when I say something to people holding their phones in one hand and driving with the other, I get what I suppose are Russian curses back at me.

This is not just a Weho problem it’s a nationwide issue. A national campaign of PSAs needs to happen for this to get the attention it needs from everyone driving/daily commuting through the City.

I agree with everything stated about texting drivers, drivers who whiz across pedestrian walkways..even those that have flashing lights on Santa Monica Blvd. Here’s a thought, The City should employ veterans/disabled to monitor walkways with the power to ticket traffic accordingly … UK has done this since WWII – why can’t our RICH City do this too? Just a thought.
As for texting – hard to monitor and ticket of course. But Sheriff Dept should do this. We pay them MILLIONS and sometimes I wonder where the money goes…”Sometimes” I said.