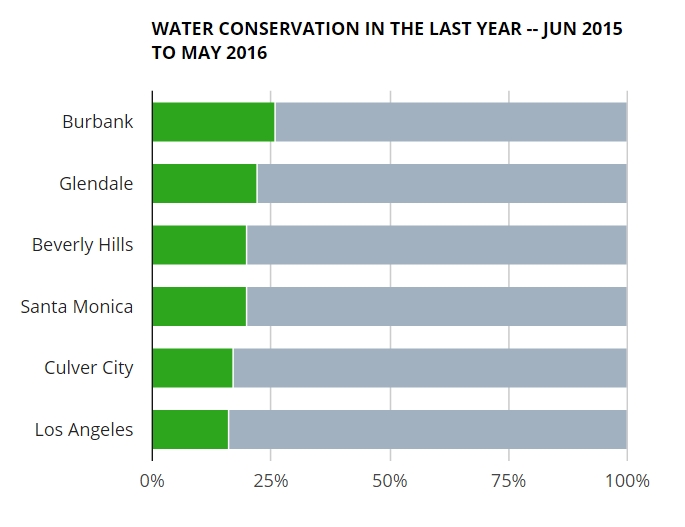 Cities in the area reduced their water consumption 16% to 26% in the last year and 14% to 24% in recent months. That is according to a report by WeHo by the Numbers, based on data from the State Water Resources Control Board.

From June 2015 to May 2016, Burbank conserved more on a percentage basis than other local suppliers. Burbank used 26% less water than in the baseline year, 2013. Beverly Hills and Santa Monica both saved 20%. Culver City saved 17% and Los Angeles 16%.

The board does not have separate data for West Hollywood, because the city does not have its own water department. The other cities in the area have their own departments, except for Culver City, which is served by the Golden State Water Company.

During this period, the state set a mandatory conservation goal for each water supplier. The goals ranged from 4% to 36%. The goals were 14% for Los Angeles and 32% for Beverly Hills. Those two cities provide the water in West Hollywood.

Burbank and Glendale both saved significantly more water than required by the state (four percentage points). Los Angeles and Culver City also exceeded their goals, by two points and one point, respectively. Santa Monica met its goal. Beverly Hills, on the other hand, fell 12 percentage points short. It saved 20% but was expected to save 32%.

To find out how the local water suppliers did compared to others statewide, see the WeHo by the Numbers report, How much water have we saved?

The state goals were recently replaced by a “stress test.” The test is meant to ensure that water suppliers can meet demand even if the next three years are dry. The local suppliers all passed the test.

This week, the state Water Resources Control Board reported that statewide water conservation fell to 18% in August 2016. That was significantly below the 27% in August 2015.

Conservation also appears to have declined locally, but by a smaller amount. The range of savings was 16% to 26% in the 12 months ending May 2016. It edged down to 14% to 24% in the next three months (June to August). The three-month numbers were 24% in Burbank, 20% in Beverly Hills, 19% in Santa Monica and Glendale, and 14% in Los Angeles and Culver City.

The sad thing about all this water conservation is it was really designed to increase the profits of the water company. Haven’t you noticed your water bill has gone up since we started conserving and using less? Agriculture in the central valley uses 90% of the water. Big cities in SoCal use minimal. But we get the raised rates and the farmers get nothing because they have the “water rights” determined in the early 20th century. I’m not saying its not good to conserve. It is! But us saving water didn’t make a pindrop difference in the water supply.

Since water conservation is necessary, it’s time to replace the dead grass in our medians with turf.