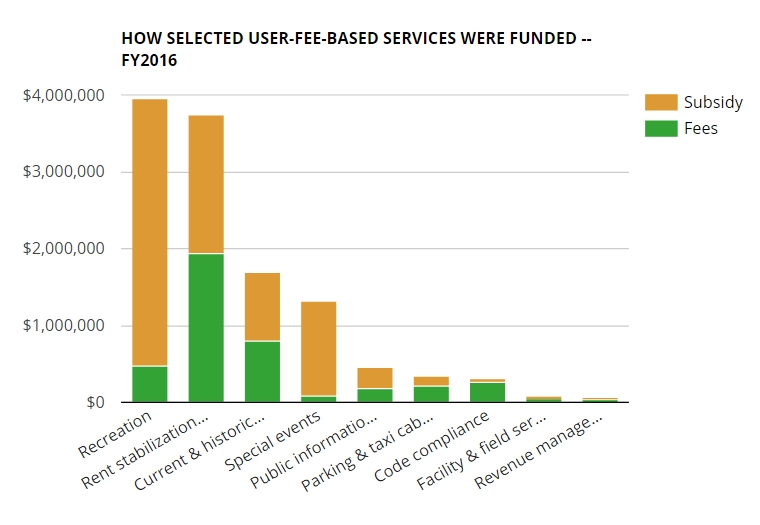 On average, user fees covered one-third of the cost of West Hollywood services such as recreation classes, rent stabilization, planning permits and special event permits in fiscal year 2016. That is according to a new report by WeHo by the Numbers, based on a consultant’s study of many of the city’s fee-based services.

The consultant calculated both the fee revenue and the cost for each service. When the fee exceeds the cost, the city must cut it for legal reasons. When the cost exceeds the fee, the city has a choice. It can raise the fee or make up the difference out of general revenues, such as hotel taxes and parking fines.

For those services, users paid $4 million in fees. The city covered the other $8 million in costs with general revenues. In that sense, the city subsidized the services.

The chart above shows the split between user fees and subsidies by city division. Almost 95% of the subsidies went to services in recreation, rent stabilization and housing, special events, and planning.

The user-fee/subsidy split varied within each division. For example, user fees covered 12% of the cost of fee-based services in the recreation division overall. Specific recreation fees covered anywhere from 6% (Tiny Tots) to 67% (Baby Boogie). It was 10% for the aquatics program, 11% for day camp, 25% for classes and contract classes, 33% for the farmers’ market, and 41% for excursions.
For many services, the city doesn’t expect user fees to cover 100% of the costs. In some cases, the city keeps fees competitive with other jurisdictions. In other cases, big increases could drive away the very users the programs were created to serve (such as recreation users).

The city’s consultant recommended that user fees cover anywhere from 6% to 100% of costs, depending on the division. For more information, please see the WeHo by the Numbers report, Are West Hollywood’s user-fee-based services self-supporting?