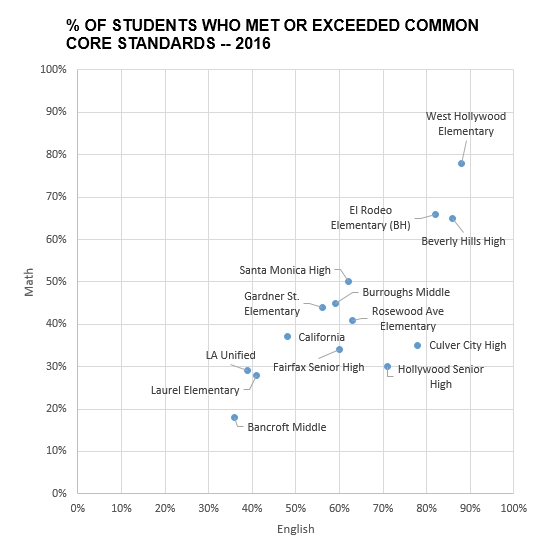 West Hollywood Elementary School’s results stand out on new state tests, according to a new report by WeHo by the Numbers. The report compared the local public schools serving West Hollywood to each other and selected Westside schools.

In California, city governments and school districts are distinct entities. Los Angeles Unified School District (LAUSD) serves the residents of West Hollywood. It has over 600,000 students, one out of every 10 in the state. The term “unified” means that the district has both primary schools and high schools.

California joined other states in adopting “Common Core” standards for what students should learn. The state introduced new “Smarter Balanced” tests along with the new standards. The 2015-2016 school year was the second year of those tests in California. The test results were published by the Los Angeles Times.

West Hollywood Elementary did very well on the tests. Seventy eight percent of its students met or exceeded the math standard and 88% met or exceeded the English standard. For comparison, the results at Beverly Hills elementary schools ranged from 62% to 68% for math and 70% to 82% for English.

Fewer students at other West Hollywood-serving schools met or exceeded the new standards. The results at Gardner Street Elementary, Rosewood Avenue Elementary, and John Burroughs Middle were in the range of 41% to 45% for math and 56% to 63% for English. Those results were above the California average of 37% for math and 48% for English.

Laurel Elementary came in below the California average but about the same as the LAUSD average. Twenty eight percent of Laurel’s students met or exceeded math standards and 41% did so for English. Bancroft Middle fell below the district average in math, with only 18% meeting or exceeding the standard.

At Fairfax High, 34% of students met or exceeded the math standard and 60% the English standard. That was lower than Culver City High, Santa Monica High and Beverly Hills High. It was also lower than Hollywood High in English but a bit higher in math.

The report did not address possible reasons for the differences in test results among schools.  For more information, please see the WeHo by the Numbers report How did the public schools serving West Hollywood do on new state tests?

Sounds encouraging for WH Elementary. It would be good to know by comparison w Laurel Elementary what these high scores can be attributed to. Is there a comparison of teaching staff, activities or general protocol? How could the weakest partner with the strongest?