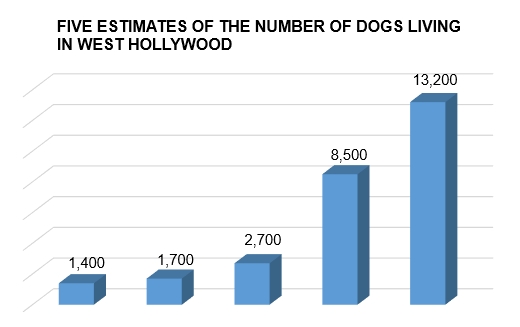 There are probably at least 2,700 dogs in West Hollywood and maybe significantly more. That is the conclusion of a new analysis by WeHo by the Numbers. The analysis offers five different estimates, ranging from 1,400 to 13,200.

The first estimate is based on dog license data gathered by KCRW, a public radio station. It assembled a database of over 400,000 dogs licensed in Los Angeles County in 2013. Its database lists 869 dogs in the 90069 zip code.

The Los Angeles Times compiled a similar database in 2008. It counted 1,189 licensed dogs in the 90069 zip code. The decrease from 2008 to 2013 could be due to methodological differences, a drop in compliance, or an actual decline in the number of dogs.

The next three estimates are based on assumptions about what percentage of dogs are actually licensed. According to KCRW, some local agencies believe that 50% to 80% of dogs are licensed. If that were true in West Hollywood, then the city would have 1,700 to 2,700 dogs total, counting both licensed and unlicensed dogs.

However, an economist for the Humane Society has estimated that only 16% of dogs are licensed in California. If that were true in West Hollywood, then the city would have about 8,500 dogs in total.

The final estimate is based on a 2012 nationwide survey by the American Veterinary Medical Association, a trade group for veterinarians. According to the survey, 36.5% of U.S. households have dogs. Among households with dogs, there are 1.6 dogs on average. If West Hollywood households are like the average US household, then those numbers suggest the city has 8,300 households with dogs and over 13,200 dogs. That would be one dog for every three human residents.

The analysis concludes that the first estimate is too low, the last estimate is probably too high, and an educated guess would be at least 2,700 dogs and perhaps significantly more.

To see West Hollywood’s most popular dog breeds and names, see the WeHo by the Numbers article How many dogs live in West Hollywood?

Dog license’s are required by the state , not the city. It assures proof that your dog is vaccinated. You must provide proof of vaccination, in order to obtain one. It also helps the shelters maintain. It also is yet another form of identification should your dog get lost. It is cheap to obtain , and must be renewed yearly. If your dog is not licensed, there is a large fine, and you will be made to pay for each year that it has nit been licensed. If your dog is spayed or neutered there is a discount. If you… Read more »

Almost every person I know in my circle who lives here has a dog – except maybe 30% of them.

The dogs are organizing and want to be heard. Rumor is they want to change the name of the city to Dogville, Dawgville, Dogtown, Dawgtown,Dog Flats, Dog Heights and Cote de Dawg among the choices. Conversely the landscape components are also seeking to unionize as Protect The Plants. Everyone has a voice in a democracy.

The range of estimates is so varied that it’s guesswork. Instead perhaps one might survey the many dog hospitals in the area and ask their estimate of ‘clients’ who live in West Hollywood. Laurel, TLC, VCA and others probably could not exist if there are only 2700 total dogs in the entire city – with lines and wait times at each facility. If I can guess too based on the data presented my guess would be over 6000 dogs. Or 1 pup for every 6 residents.

With the over proliferation of DAWGS, we could benefit by having them licensed by the city. And in return use the funds to clean the sidewalks and parkways which have become intolerable….. vast dog latrines…..not to mention the plants, bushes, hedges and grass that become the target of everyone’s pooch. Seems no one can locate the curb, as in curb your pooch. Now that doesn’t even cover the petri fish aspect of parasites on every patch of grass that Fluffy brings home. Rather nasty.

License? Didn’t know there was one or even how to get it. What is the point of it anyway? Sounds like just another way for an already bloated city to get more money. Perhaps we can have licenses that are something more than just a metal tag; something with a little more style. My dog would like that!

Our 102-unit condo building has 35 units with pets; 28 units with dogs (34%), 34 dogs total (1.2/household), and 13 cats. Some units with both. Almost 50% of the units have pets.
Dog names include the popular Charlie, Max, Lola, Lucy & Bella – and five dogs whose names begin with “R”. Maltese mixes, dachshunds, Shih Tzus, cocker mix, pugs, poodle/mix, lots of terriers and one golden retriever. Our building is very close to the national demographic. I would be very surprised if they were all licensed.

Weho should be renamed the city of dogs! Or bitch city! Too many everywhere!

I’d guess one contributing factor could be that a lot of WeHo apartment and condo buildings which were once “no dogs” buildings have lifted their ban to attract more potential tenants and owners.

I can vouch for my friends Henry, Windsor, Tia, Oscar, Kuma, Chorro, and Bamboo.