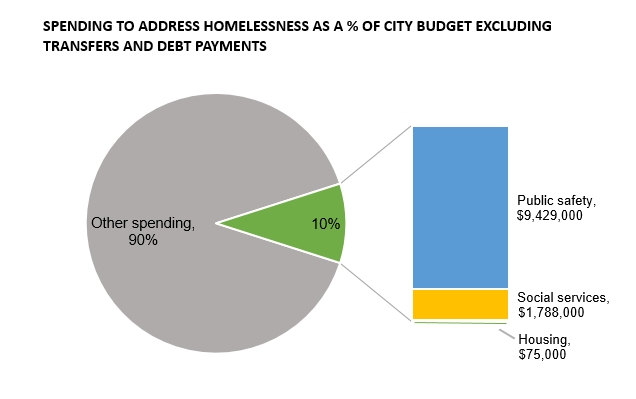 The City of West Hollywood is spending over $11 million this year to prevent and address homelessness and its impacts. That is according to a new report by WeHo by the Numbers.

As part of the recently completed budget process, the city estimated the amounts spent to address homelessness. The spending adds up to $11.3 million per year. That is 10% of the city’s operating and capital budget, excluding internal transfers and payments on the city’s debt.

The bulk of the estimate, $9.4 million, is for public safety services. Of that, $9,157,000 is for the time sheriff’s deputies devote to homelessness-related issues. According to the city, the deputies on general patrol spend two-thirds of their time on these issues. The new Eastside foot patrols and the COPPS (community-oriented policing and problem-solving) team spend 85% to 100% of their time on these issues. The budget includes funding for four new deputies.

The report suggests it is unlikely that the city’s spending on Sheriff’s deputies would go down by the full $9.4 million if homelessness were no longer a problem. However, deputies would be freed up to deal with other issues and the city might choose to put new money into other priorities rather than additional deputies.

The city is spending $1.8 million for social services that address or try to prevent homelessness. That includes $1,685,000 for 19 contracts with outside social services agencies. The biggest single item at over $300,000 is for shelter and supportive services at an organization called PATH (People Assisting the Homeless).

The city’s memo identifies only $75,000 in specific studies and services related to homelessness in the Rent Stabilization and Housing Division. The report suggests that it might be fair to count a bigger share of the division’s $2.4 million budget. More residents might be at risk for homelessness if the city did not provide affordable housing units, rent stabilization, and help with tenant rights. The WeHo by the Numbers article is What does West Hollywood spend on homelessness?

I do not know where these numbers came from but they are in know way true or factual, they seem to be used to justify the Sheriff’s budget, Larry is right, you can not make hay about these figures, they do add up and Nathan is correct, Housing First works, delivers a bigger bang for the buck and has resulted in a 100% success rate in moving Homeless VETS off the streets in Virginia, Utah and even New Orleans.

It’s peculiar that more than $9 million is spent on security related to “dealing” with homelessness, but only $75,000 is designated to the real solution: housing. Studies have shown that Housing First works. Simply put: provide housing options to the most vulnerable people on your streets, and you’ll see spending go down, and quality of life go up. Surprisingly, as much as West Hollywood loves to pride itself as a liberal bastion, the city is no better than the most conservative corners of our county in addressing homelessness. As a provider in the Hollywood area, while also helping to coordinate… Read more »

This issue is not as simple as some think.

Applying our own standards of living onto those individuals living on the street will not eradicate homelessness.

Maybe we’re doing all we can do in a free society…….But I really don’t know.

Despite my recent story, no real harm or danger came to me or my dog. In fact I do always consider homeless people as real PEOPLE in such need of help and assistance it goes beyond a person’s ability to fully understand, unless they have personally had a homeless experience. Personaly, I am not fearful. My dog (the one the homeless kid was waving a rag around like a matador in a bullfight (aka Public Crulity of an animal For Entertainment). is a sweet lovable MASSIVE American Pit Bull Terrier, whose sight alone scares 90+ % of the people we… Read more »

We deserve to have an integrated facility in the center of our city at Crescent Heights and Santa Monica Blvd so everyone can witness the progress towards a solution. No more hiding in a corner on the outskirts. Owning up to a problem is the first step towards our recovery from being useless bystanders.

Thank you Larry for illuminating the figures. It’s always in the details. This urgent issue is not as Bonni suggests unacceptable behavior from unfortunate individuals when we, yes WE individually and collectively are perpetuating the heartbreaking situation. We send checks to foreign countries yet complain about living casualties in our daily path.

Let’s have a meaningful engagement in the community. The solution is right here under our noses.

The article states ‘The City of West Hollywood is spending over $11 million this year to prevent and address homelessness and its impacts. That is a false statement. The entire budget for the entire sheriff department is 18 million dollars. In the last study the city identified 80plus homeless within our borders. If those figures are correct as stated that is $129,000 per homeless individual. It would be cheaper to rent a hotel room for each of them, or better yet spend 24k a year and get all 80 of them an apartment. The article also states ‘The city is… Read more »

Just a personal experience. Two days ago a homeless person started waving a shirt/rag right in front of my dog (who was securly tied up outside a small shop on SMN). I was 3 feet away, and immediately rushed out to confront him and make him stop. He said “geeezz (not really, I can’t post actual dirty words) I was just trying to get the DOG TO LAUGH.” I’ve never seen a dog laugh and for a brief second, I thought I ought to get a dog who laughs … An obedient audience for my sense of humor – that… Read more »

Thank you for this useful report David. In order to get a more accurate picture it would be relevant to get some specific case information on individuals which need not betray any privacy issues. Unfortunately these financial statistics are perplexing as they don’t leave an impression of effectiveness. There is a sense of misapplied effort and/or over reliance on the our law enforcement personnel as problem solvers. I have taken the time to inquire of several homeless individuals to determine the details of their predicaments and feel that different approaches are being overlooked while watching these folks sink measurably over… Read more »