Christopher Street West (CSW), which continues to face heat for high ticket prices and what some see as exclusionary programming at this year’s L.A. Pride event, now has competition. The DTLA Proud Festival is scheduled for Aug. 7 at Pershing Square Park in downtown Los Angeles. 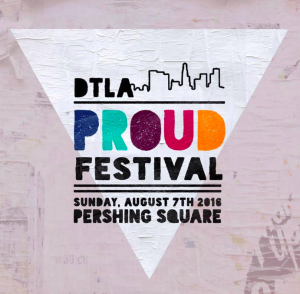 In an announcement of the event, DTLA Proud said that “through community partners, the festival will showcase the best that downtown has to offer through 40 community booths (10 local restaurants, 15 local retail shops and 15 LGBT community groups), a main stage programmed by the burgeoning and established LGBT nightlife, and grounded by a pop-up water park for all to enjoy.”

“Our goal is to create a festival that represents the diverse LGBTQ population that lives, works and plays downtown.”

There were complaints about the cost of attending the L.A. Pride festival at West Hollywood Park this year. (L.A. Pride admission initially was set at $35 for Saturday and Sunday, up 40% from last year, then lowered to $30 after protests.) By contrast, DTLA Proud is offering tickets purchased in advance for only $5, a 50% discount for the $10 price the day of the event.  It is clear from the group’s website that its programming is considerably smaller than that of L.A. Pride and will not include a parade. Many of the events associated with the DTLA festival will be staged at downtown Los Angeles gay bars such as Precinct, Redline and Bar Mattachine, which have helped the area quickly develop a reputation as the place to go for gay hipsters.

DTLA Proud lists as partners community groups such as the Trans Latin@ Coalition, Bienestar, APAIT and St. John’s Transgender Health Program. Members of APAIT and Trans Latin@ Coalition had called for a boycott of L.A. Pride when CSW’s new management announced it was converting the event into a music festival aimed at millennials, which would require CSW to reduce programming for transgender, lesbian and other LGBT groups. CSW backed away somewhat after an outcry from members of the LGBT community and threats of a boycott.

DTLA Proud offers sponsorships at prices ranging from $100 to $20,000, with the most expensive option offering stage and venue banner presentation, a social hour with the DTLA Proud leadership, an opportunity for the sponsor to speak at the event, recognition online and in print and 20 free tickets.

It is unclear at this point whether the DTLA Proud festival will have an impact on L.A. Pride, which is a major revenue generator for West Hollywood businesses. A study of the city’s major special events conducted by Conventions, Sports & Leisure International (CSL) shows that Pride is the largest revenue generator by far, with the 2014 event resulting in more than $5 million being spent in West Hollywood during the 2014 LA Pride parade and festival — money that would not have been spent in the city’s bars, restaurants, hotels and shops without the event. By contrast, the annual Halloween Carnaval generated $2.3 million in new spending in WeHo. L.A. Pride costs the City of West Hollywood roughly $600,000 in lost revenue from parking meters and for street cleaning, public safety services and other services.

Last Wednesday’s community discussion about L.A. Pride, proposed by Mayor Lauren Meister and City Councilmember John D’Amico, will be followed by another community meeting on Aug. 17 at 6:30 p.m. at the West Hollywood Park Auditorium, 647 N. San Vicente Blvd. south of Santa Monica. Meister said that event will focus not on problems with the past event but on the next one. Meister has invited those who can’t attend the meeting to offer their opinions on L.A. Pride through a survey on the city’s website.

I would so love to continue to support CSW —–IF CSW would support us! And that means getting most of the present board and specifically the organizers like Chris out. His evasiveness in answering our questions were amazing. And I was so hoping the city would step in and get him to answer in as much as the same way they were corralling the QUESTIONERS! They constantly reminded the questioners to keep it short and get to a point, yet they allowed Chris to do a monologue on whether he actually said that he wanted the festival to become like… Read more »

there is room for a pride in every city in the us. i am happy for la. weho pride will always exist.

DTLA Proud is listening to the needs and desires of our community just as CSW lost its way. Time for new blood in our community!

Yep, I will no longer support CSW pride events. It has ceased to be financially accesinle for years and was disgusted my the move to remove long-time community non-profits from the event. As West Hollywood continues to sell out and remove historical gay venues – it becomes increasingly irrelevant to a citywide gay population.

How did a Celebration of us being proud of who we are turn into this? Shameful. The first Gay Pride event I attended in 1976 was a row of floats that traveled down Polk St in S.F. It was amazing and I felt PROUD! This has turned into a battle of Marketing & $$ and who benefits? We have forgotten the point. Do you think this is what the people at Stone Wall were fighting for that night? If you GAVE me tickets I wouldn’t attend any of this.

LOVE IT. LOVE IT. LOVE IT! It’s about time that we in WEHO realize we are not that spacial, LGBTQIA are NOT FOR SALE any more. The fake image of WEHO must stop, Enough is enough. 1.9 mile city with so much corruption it’s sick. CSW is nothing but $$$ and fake 2 face people, all about bad image. WEHO PRIDE is A BAD “PARTY” METH, HEROIN, DRUNKS and SEX most of the time not even SAFE SEX. YOU GO DTLA. It’s time to bring our community together and bring our friends from all over the world to our city… Read more »

Remember when Pride was just a bunch of us marching down the street passing out literature and holding protest banners and signs and then when we were done we would go to the bars and have cocktails and dance and tell stories and if you didn’t have money it was OK because you didn’t need money to march down the street and the bars ran drink specials and the only organization needed was for your your sign or your outfit or both and the entire community would go, “Look at them silly gay people, they sure are proud!” …and the… Read more »

This year’s Pride more than double the losses of previous years at despite that President, Chris Claussen claimed the new format will attract Millenials who want a music “Cochella” style event. We that proved wrong. Unfortunately, four board members arbitrarily locked-out the other board members from being informed of “special meetings” where a vote/decision was made without the rest of the board being informed or able to vote in dissent. These other board members are afraid to publicly disclose any details for fear and threat of a lawsuit by the leadership. This is clearly against the California Corporation Code and… Read more »

The NEW DOWNTOWN L.A. PRIDE & NEW VENICE BEACH PRIDE.
West Hollywood. ..thanks for the bad memories. ..
CRIME,CORRUPT POLITICIANS , SEXUAL SCANDLES,MISAPPROPRIATION OF FUNDS, GREED, LIES TO CITIZENS & Excluding citizens. ..
We’ve taken our PROUD GAY DOLLARS “over the Rainbow”. …
To a place of inclusion, honesty & pride.
We no longer want your “MUSIC FESTIVAL”.. ..We will create a “PEOPLE FESTIVAL”…
Let us show you a true example of inclusion wins..This isn’t just a clever catch phrase you like BOAST, for L.A. gays…..It’s a way of life!

I plan on going and sure hope it takes off. It’s high time that an LA pride actually takes place in LA. And with an admission price of $5, it’ll be one that the whole community can afford to attend.